Round 7: The Old Shell Game

of the players sitting down to face off in the first round of Day Two have racked up a Pro Tour Top 8 this season. The Netherlands' Frank Karsten got his the last time he was in Japan when he reached the Sunday stage in Nagoya, clutching his draft list for the final Rochester Draft Pro Tour -- the last individual Rochester Draft Pro Tour, anyway. Rising Japanese star Tomohiro Kaji earned his moment in the spotlight as a member of One Spin during Team Rochester in Pro Tour-Atlanta. His teammates were Kenji Tsumura and Tomoharu Saito. 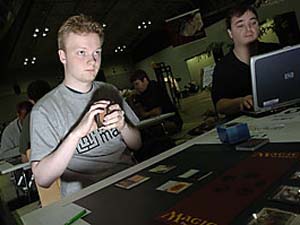 Frank Karsten, not as evil as he looks.

Karsten and Kaji were seated next to each other for the draft and they got along perfectly. Karsten took green-white cards with a smattering of red and happily passed green-black to his left. Both players ended up with solid decks. Karsten had three Selesnya Evangels and Tolsimir Wolfblood while Kaji had a pair of Keening Banshees among his notable cards.

Karsten had a hand with double Galvanic Arc and double Scatter the Seeds but no cheap plays to make use of either of them so he shipped it back. Kaji was on the play and had decided to keep his opening hand. Karsten's second hand had one land but even if he wanted to keep that hand he could not since the land was Selesnya Sanctuary - he went to five.

Kaji opened up with Farseek for a Plains. On the following turn he played a fourth land, a signet, and a Centaur Safeguard. Karsten put a Civic Wayfinder in the Centaur's path and found himself a Mountain. Kaji bided his time playing out Stinkweed Imp and Shambling Shell. Karsten had no play save a Boros Signet on the next turn. He put his Wayfinder in the way of the 3/1 and saved his own guy with Gather Courage. Kaji had another Centaur.

Tolsimir Wolfblood came down for Karsten. Kaji thought for a while before sending in his whole team. Karsten shrugged and traded the Centaur for his Wayfinder but did not want to risk his legend in combat. Kaji made a Junktroller. Karsten's deck started to creak into action as he was able to play Selesnya Evangel and Root-Kin Ally - although it looked like it might be too little too late. Karsten was at 12 and Kaji decided it was time to get aggressive with his Stinkweed. He sac'd his Shambling Shell at the end of the turn and dredged it right back. He played it and sent it back where it came from. Karsten dropped to 9 from the increasingly large Imp. He did make a 4/4 wolf token though and his Evangel was going to start pumping out grizzly bears in one turn.

Frank chose to not wait for his Evangel and served with everyone. Kaji took a bunch but had plenty of life to work with. He dropped Karsten to five on the next attack - exactly enough for his Stinkweed to finish the job on the next turn with one more dredge of the Shell. Karsten had no outs but made Kaji go through the motions of dredging so he could see more of Kaji's deck as it hit the graveyard.

Kaji had the Farseek again on turn two. Karsten could not play his Evangel because he had to take a turn to lay her Sanctuary, but it appeared a turn later. Kaji used his four mana on turn three to play Nullmage Shepherd. Karsten played a second Evangel. He took two from the Shepherd and Kaji dropped Golgari Rotwurm. Root-Kin Ally was convoked into play and was assigned guard duty along with a token. 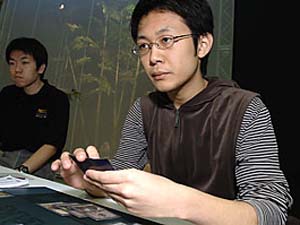 Tomohiro Kaji had a fine Imp-Shell plan working to perfection.

Kaji enchanted the fattie with Clinging Darkness and swung in. Karsten blocked the Shepherd and pumped his Ally with the token. He took five from the Rotwurm and Kaji reinforced with a not-so-impressive Centaur. Karsten untapped and now had two active Evangels - even with darkness clinging to it the Root-Kin could grow pretty large. Karsten added Nightguard Patrol to his increasingly crowded side of the board.

Kaji could not attack but brought forth Mortipede, which could currently get 10 points of damage through if Karsten had no answer. He did not have one until his draw step when his deck yielded up Galvanic Arc. He only had three lands - although four mana - and was not able to take full advantage of his token generators.

Kaji enchanted the Root-Kin with Faith's Fetters and sent in his Rotwurm and Shepherd. Karsten blocked the fattie with his Patrol and pumped it with Gather Courage. Kaji tapped a black and threw the Wurm at Karsten.

Karsten's deck was working fine now even without more than three lands and he convoked out an Equenaut and had five tokens to accompany it. Kaji was out of action and simply drew his cards and said 'go' for a couple of turns. Screeching Griffin joined the airforce for Frank. Kaji was doing nothing and Karsten was making three guys a turn - they were soon onto the rubber game.

Karsten's deck continued to post unimpressive opening draws and he had to ship back a one-lander. His second hand was five mana sources and an Evangel. He frowned and kept it. Kaji ramped his mana once again on turn two with one of his two Farseeks.

Karsten did not see any early fliers this game but did draw a sideboarded Ivy Dancer. When Kaji showed that he was going to try and use Stinkweed Imp/Shambling Shell dredge tricks to push through, Karsten wished that the sideboard card could magically revert to the maindeck Elvish Skysweeper he had taken out for it.

With the ability of his deck to churn out cannon fodder, he would have been able to make the Stinkweed a non-factor in the game. As it was he just had to stand by helplessly as the Kaji put a pair of counters on his Imp over two turns and started attacking for a little more damage each turn.

"I have seen this plan before," grumbled Frank as he made a token and put it in the way of the Rotwurm.

Kaji had no surprises. He was soon out of cards and was clearly intended to ride the Shambling Shell until Karsten found a way to stop him. Pretty soon he was low enough on life that Kaji was able to finish him off with an attack and double Rotwurm activation. Karsten looked at the Ivy Dancer that had stood by and done nothing all game and thought about what it could have been.