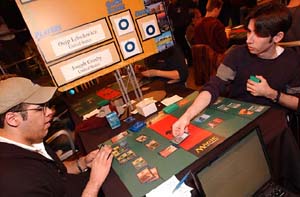 These two gentlemen were undefeated so far and had to battle it out to see who got to draft on table 1 tomorrow for sure. Both of them are of Togit/CMU affiliation – making that a total of 5 people from that team battling it out on the feature match tables this round. Talk about dominating the tournament!

Osyp won the flip but it was Joseph with the first play, a Goblin Taskmaster. A Wirewood Savage and Snarling Undorak from Osyp gave him a good position though. Joseph had cast a morph the previous turn, and attacked with just his Taskmaster on his turn. The morph turned out to be a Disruptive Pitmage – it countered Osyp's Barkhide Mauler. Mistform Dreamer was added to Joseph's side of the board. Osyp cast an Embermage Goblin to deal with the threats and he fetched his second copy of the Goblin Wizard. Joseph brought in the Taskmaster and Dreamer, beating Osyp down to 10. A Pinpoint Avalanche destroyed the Embermage Goblin. 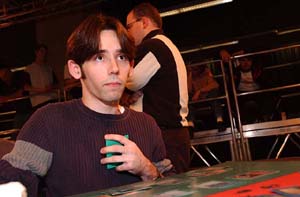 Osyp served with his Undorak and Savage, bringing Joseph down to 9. The second Embermage Goblin hit the board, but that got stolen due to a Blatant Thievery. The Pitmage chumped the Undorak, while the Savage went unblocked. That brought both players down to 7 life. Treespring Lorian was added to the mix and Joseph's Dreamer got Shocked. Another Blatant Thievery from Joseph took Lorian. The Savage and Undorak came in once again and the two beasts trade. Goblin Taskmaster traded for a morphed Skirk Commando and the battlefield was down to only the Embermage Goblin and Wirewood Savage. Osyp's Symbiotic Elf got Discombobulated and Joseph dug in his deck to find a way to stall this game out long enough to finish Osyp off with the Embermage Goblin. The morph turned out to be a Charing Slateback. Joseph enchanted his Embermage Goblin with a Lavamancer's Skill and finished off the Savage so the beast could finish off Osyp. 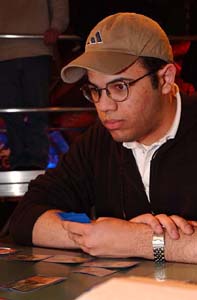 Goblin Sledder hit the table along with a Wirewood Elf and a turn 3 morph. With Osyp having missed his third land drop, Joseph Chain of Vapored the Elf and made a Mistform Dreamer. The Morph and Sledder went unblocked and Osyp replayed the Wirewood Elf. All three came in next turn and Snarling Undorak was unmorphed, bringing Joseph down to 10 life. Joseph had another eventless turn, and Osyp's next attack step brought Joseph down to 2 life already. In response to Joseph's Blatant Thievery, Osyp Shocked the young American and it was time for them start sideboarding again.

Joseph's turn 2 Imagecrafter got a Lavamancer's skill to kill off Osyp's Wirewood Elf, only to be Erratic Explosioned itself a little later. Up next was an Ascending Aven that got Shocked, and a morph on Osyp's side. Spitting Gourna came down on Osyp's next turn, while Joseph cast a Mistform Stalker and a morph of his own. A Goblin Sledder allowed Osyp to attack with his creatures, and he unmorphed his Snarling Undorak. The Stalker got Skilled up, but it fell to a Starstorm for 2. Joseph scooped after that.