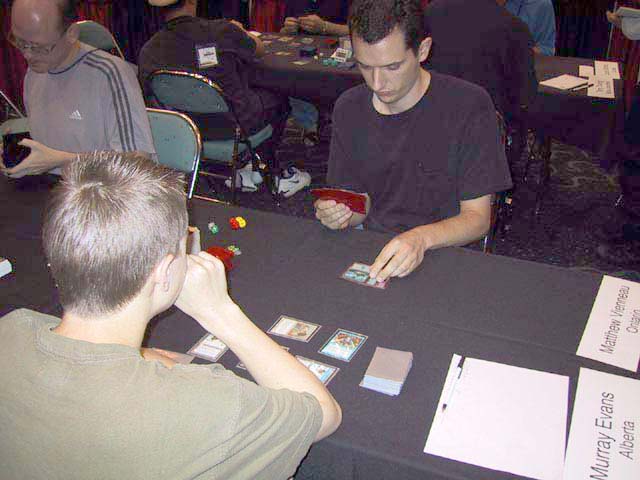 In the first round of Day Two, a wide variety of decks were being played by the top players from Canada. Tsang and Boileau both chose mono-blue to begin their 6-0 day, following in the footsteps of the most successful decks from the Canadian Open. Down at 4-2, both Matt Vienneau and Jason Simard chose to slightly different versions of Crosis-Go (based off of the Amateur Championship deck from Origins), while Murray "the Mauler" Evans came in with the most popular deck type of the tournament, Counter-Rebels, also played by this rounds other feature, Gary Wise versus Gab Tsang. Michael Gurney was this feature matches sole representative with Probe-Go, which was otherwise well represented as a deck at this tournament.

In the first game, Tsang and Boileau started off to a typical beginning. Skies dropped some early beatdown with a few Spiketail Hatchlings, a Rishadan Airship, and a Waterfront Bouncer, but soon, the Opposition-Orb deck was able to bring down the lock. A Troublesome Spirit joined the mix and despite Waterfront Bouncer keeping the table somewhat clean, Terry was unable to push through the final points before the lock was complete.

Meanwhile, in the matchup between Murray Evans and Matt Vienneau, Evans had brought out most of the Rebel Chain, while Vienneau frantically tried to keep up with card drawing via Fact or Fiction and Accumulated Knowledge, while his Nether Spirit looked glumly on at ever increasing numbers of fliers. Similarly, Simard and Gurney postured with card advantage in their own matchup, but only Gurney had a creature on his side of the table - again, a lone Nether Spirit.

Soon, Evans' side of the table would look as blank as Simard's in the other match. While Evans had enough damage on the table to kill Vienneau on the next turn, he lacked any counterspells. With only 6 mana, Vienneau could only hope that his Tsabo's Decree would resolve, and looked quite surprised when it did. Tapped out, Vienneau had a mitful of counterspells, but was wide open to any threats that Evans might topdeck on the next turn. Evans drew another land, and on Vienneau's turn, he untapped with heavy countermagic online. 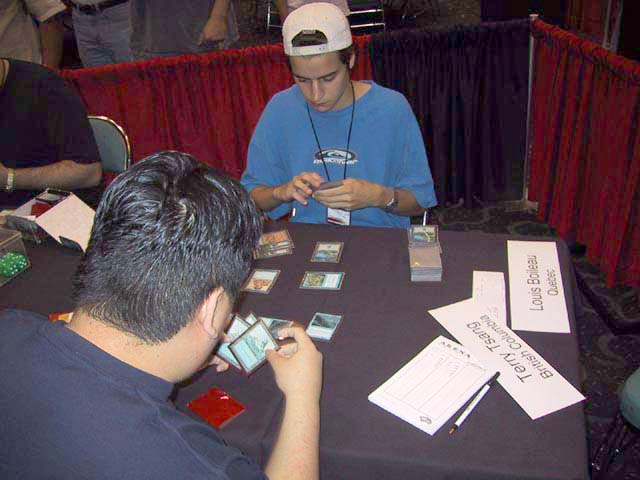 As the counterwar over Tsabo's Degree progressed, another war happened between Gurney and Simard. Simard had achieved 12 mana, and had 3 Urza's Rages in his hand. However, Gurney was high at 23 life, and had a pair of Absorb and a Dromar's Charm in hand, with a Nether Spirit in play bringing Simard down quickly. Still worried about potentially losing to Urza's Rage, Gurney Vindicated Simard's land in two consecutive turns, and was able to keep Simard from Raging him out, while the Nether Spirit finished his opponent. Vienneau, in his match, was making similar short work out of Evans.

While the control decks fought it out, Tsang had already managed to win the next game, dropping out incredibly quick creatures and winning a counterspell war over Boileau's Opposition. He didn't do it without some problems, however, receiving a warning for forgetting to tap all of his lands with the Troublesome Spirit.

Vienneau and Evans next game started out with a tumultuous beginning. Evans dropped an early Falcon, only to have it Raged, and followed up by getting a Meddling Mage into play, stopping any future Tsabo's Decrees. While his next 3 Rebels were either systematically countered or killed by Vienneau, his Mage got in a few beats before a Nether Spirit began to hold it off. Vienneau was holding the wrong counters in the end, however, and a Defiant Falcon dropped onto the table, beginning Lin Sivvi's dominance of the table.

Gurney and Simard's second game continued the posturing that started in the first game. With numerous counterwars over Fact or Fictions and Probes, eventually Gurney was able to push out a Millstone, only to have it Recoiled. Over the next turns, both players were able to get out Nether Spirits, with Gurney having one to Simard's two. Simard had one other advantage: Keldon Necropolis. The uncounterable damage started taking its toll on Gurney, as he tried to push the Millstone back onto the table, getting it to resolve once again, only to have it Recoiled. 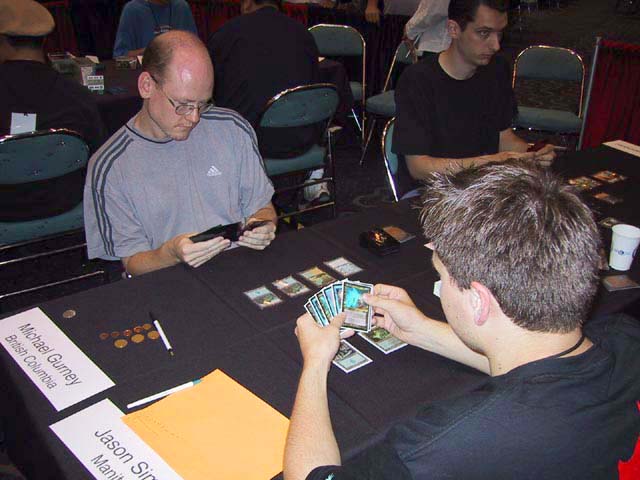 In Vienneau's match, he soon found himself falling to Lightbringer, and with less than 20 minutes left, Vienneau conceded to move onto the next match. Tsang and Boileau, on the other hand, were rapidly nearing the conclusion of their match. Tsang had out a Troublesome Spirit and several other fliers, while Boileau was struggling to maintain control with a Temporal Adept. Tsang's dominance of the table was pretty secure, but he received a third warning for the match, forgetting to tap his lands to the Troublesome Spirit. Head Judge Mike Donais issued Tsang a game loss for the repeated error, giving Boileau the match win.

The control decks, meanwhile, continued their regular posturing for card advantage. Vienneau managed to keep his board clear in Game 3, while Gurney was slowly losing life to the Keldon Necropolis in Game 2. Gurney tried to reclaim some lost life, but lost a counterspell war over Death Grasp. With time running out, Gurney conceded after Simard resolved an Accumulated Knowledge for 3 gave Simard a third Nether Spirit, and enough damage to finish Gurney off. Vienneau, continued to whittle away Murray's life with Undermines and a Nether Spirit relentlessly attacking Murray's clear board.

Time for the match was called, and Gurney and Simard were left with a draw, but Vienneau and Evans still had a fight on their hands, with Evans trying to stay alive to get a draw. With only a few turns left, Vienneau resolved an Accumulated Knowledge for 3, and followed it up with an Accumulated Knowledge for 4. With the extra cards, Urza's Rage finished the job, and Vienneau won the match in overtime in turn 4.

4 Wrath of God 4 Fact or Fiction