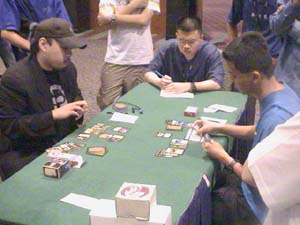 Pang Ming Wee is a local player and is well recognised for being some good at limited Magic. He is currently the top ranked player in Malaysia and has had a GP Top 8 to his name (Brisbane). Higashino is a former Japanese National Champion (1999), a two-time Grand Prix Champion, and generally a guy you do not want to mess with.

Higashino won the die roll and chose to play first. A Crypt Creeper was his first play. PM replied with Mesmeric Fiend and chose Afflict over several green creatures. The Creeper creeped in for two on Higashino's turn, and he passed. PM, needing to stop the bleeding, replied with Skywing Aven. He would be safe for the next turn, at least, protected by his feathered friend.

But Higashino had other plans. He summoned Krosan Constrictor, which would swampwalk its way to victory if left unchecked. PM's response was mediocre - a rather vanilla (for this matchup anyway) Pilgrim of Justice. What was interesting though was how PM refused to play the Chainer's Edict he had drawn, preferring to keep mana up for Aether Burst.

When it was Higashino's turn the Constrictor started attacking, and his subsequent play of Grotesque Hybrid threatened PM's Skywing Aven for superiority of the board. At Higashino's endstep, PM sent the Hybrid back to its owners hand, and on his turn sent his Aven, Fiend and Pilgrim brawling. Higashino traded the Creeper for the fiend. On his turn he played Springing Tiger, confident it would answer any further security questions. But the cat would not do, and PM sent it back to the top of Higashino's library with Repel.

PM attacked again with his Pilgrim and Aven, and played Phantom Whelp. Higashino had had enough and played the Hybrid.

POW! PM got Chainer to issue an Edict, and by timing his use of the removal spell correctly put Higashino in a difficult position - to sac the Hybrid and take five, keeping his unblockable Constrictor, or to lose the Constrictor and not have a path to victory, effecting a ground stall. Higashino chose the former option, and sucked up Whelp, Pilgrim and Aven damage.

The sudden swing in tempo cost him the game. PM replayed the Whelp, brought a Patrol Hound into play and cast Aven Cloudchaser. Seeing PM had no cards in hand Higashino used the opportunity to Afflict the Skywing Aven, ensuring that PM would be able to attack again on impunity on his turn.

Higashino could only take the damage. On his turn he replayed his Springing Tiger, so only the Cloudchaser remained a threat. He also played out a Shadowmage Infiltrator, which he attacked with to find an answer to the Cloudchaser. But it was not to be.

PM TD'd a Morbid Hunger and it was all over. 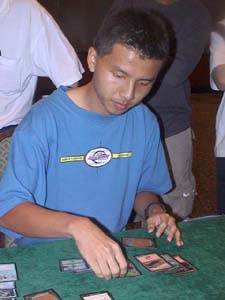 Both players elected to bring in Red removal spells for Game 2. Higashino also boarded in a Nantuko Blightcutter.

Higashino started first and played the Crypt Creeper again. He followed up with Blightcutter. PM's first play of the game was a Barbarian Lunatic which traded with the Blightcutter next turn. Higashino's next move was devastating - playing Last Rites for three pitching Basking Rootwalla, Soul Scourge and Metamorphic Wurm (he had a land light hand) for Painbringer, Shadowblood Egg and Aether Burst. To casual observers it didn't seem like a good trade, but when PM is reduced to holding just lands, and Higashino is holding just Narcissism (!) then maybe it wasn't so bad.

To cut the story short PM was stuck topdecking and was slapped around by Higashino's Rootwalla. This continued for a while until PM cast Possesed Aven. Higashino's reply was Krosan Beast. The Aven chumped, but PM could not find another blocker. In one attack, Higashino did ten damage with the help of Narcissism, and PM got stomped.

Wee kept a hand that had Islands and a Cephalid Looter. Higashino kept a two land hand because he was drawing first. The Looter did not make it into play on turn three though, because Higashino's Mesmeric Fiend on turn two removed it from the game. This did not bother PM too much, as Higashino missed his third land drop and PM made a turn four Possesed Aven.

Higashino's turn four saw him draw the third land he needed, and realizing that he was going to be operating land light, cast Last Rites and exchanged a Metamorphic Wurm and Narcissism for Soul Scourge and Afflict. 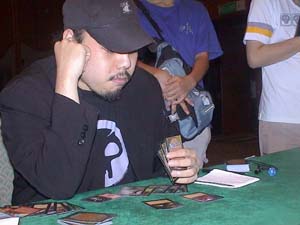 PM put even more pressure on H when he found a Swamp off the top of his deck to go with the Barbarian Outcast he had in his hand. PM also played another bear: Phantom Whelp. Possessed Aven served, and it was Higashino's turn again. He could only manage Cabal Torturer.

PM's gamble of committing all his forces to the table appeared to be working. Meanwhile Higashino's mana problems were starting to take their toll on the game. Needing to dig deeper through his deck and to mitigate PM's attacking forces, he used the Torturer and Afflict to ice the Outcast. PM undeterred just swung with his remaining forces. Higashino found a blocker in Grotesque Hybrid - it traded with the Possesed Aven but PM found a Soul Scourge to replace it.

The Scourge continued to nip away at Higashino's life total, despite the Torturer's efforts. There was no way out - Higashino could not deal with the flyer, and was put out of his misery when PM topdecked Morbid Hunger once again.