Round 7: Patrick Mello vs. Kai Budde 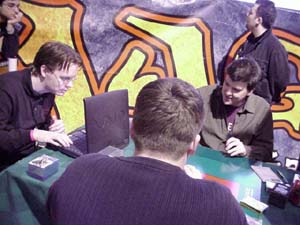 The final round of the day and who should be playing on the top table but German powerhouse Kai Budde and fellow Godzilla team-mate Patrick Mello. They've played each other many times before including a marathon final at Grand Prix Lisbon earlier this year.

Budde has a green-blue-red deck that doesn't look like much on paper but has a lot of synergy and an unfair share of madness tricks. Mello has a solid green-black deck.

Mello won the die roll and opted to draw. Budde didn't get a quick start as Mello summoned the first creature – a Werebear on turn 2. Budde cast Rites of Spring to find the Mountain to pay the madness cost on the Fiery Temper he'd discarded to Rites of Spring. Well it is called madness for good reason. In this case it completely turned around the tempo of the game.

He then followed with a quick surge of weenies – Hydromorph Guardian, Krosan Avenger and Aquamoeba.

Mello held them off with Nantuko Disciple and Dirty Wererat before giving Budde a window of opportunity to Firebolt the Disciple by tapping out for Nantuko Calmer and Millikin. The Disciple gone Budde surged in with Avenger, Aquamoeba and a Basking Rootwalla he'd made at the end of last turn to knock Mello to nine.

Mello made a monstrous 6/6 Ivy Elemental but was still under pressure as Budde was attacking through the air with an Aven Fisher. A Chainflinger added to that pressure.

Budde had already cast and flashed back Deep Analysis. Then he cast Breakthrough, gaining threshold and drawing yet more cards. Mello scooped. 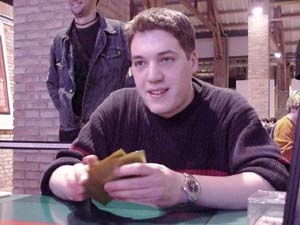 Mello made Budde go first and he started quickly with Chatter giving him Squirrels on turns 1 and 2. Budde had taken a risk with an opening hand of just two Forests and although he missed a land on turn 3 he could still play a Rootwalla.

Mello's Wild Mongrel ate the lizard when it came in to attack but Budde found a Forest and then an Island to bring in a Dreamwinder - Mello had played one of his two Islands the turn earlier - then an Aven Fisher, while Mello only added a Nantuko Calmer to his side.

Mello summoned a Leaf Dancer to hopefully begin some offense.

Budde's next turn was pretty savage when he pulled off the madness trick with Rites of Spring and Fiery Temper to kill the Calmer and then Dematerialized the Mongrel to clear a path.

The Mongrel came back and traded with Dreamwinder but then Budde brought in Chainflinger.

Mello had paid for discarding two Swamps to the Mongrel earlier as he never saw another Swamp to cast the Faceless Butcher in his hand and a Chainflinger at threshold plus Fiery Temper was enough to end the game.