With two rounds left, Owen Turtenwald and David Williams were both assured a spot on Saturday, but at 5-1 the pros were jockeying for position heading into the penultimate round. The difference between 6-1 and 5-2 was the difference between a little breathing room and needing to make a serious run to have a shot at the Top 8.

What's more, Turtenwald was fighting off some strong pushes in the Player of the Year race from Ben Stark, only 3 points behind, and a trio of players 7 points back, including the red-hot Yuuya Watanabe. 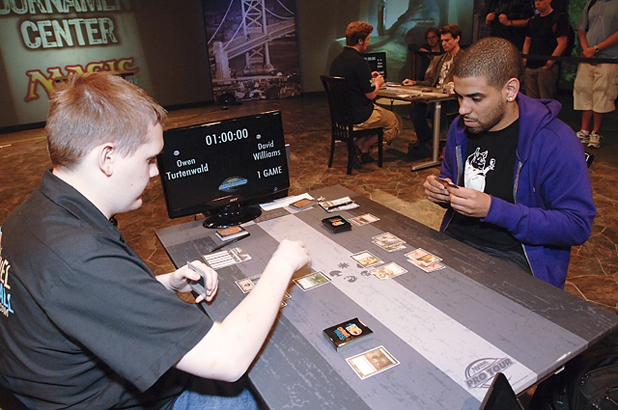 Owen Turtenwald and David Williams both have their eye on 6-1.

With that in mind, the two fierce competitors entered the feature match arena, eyed each other up, and...

"About to get ranched," offered Turtenwald.

"You deserve to lose. A play mat in the feature match area?" Turtenwald quizzed as Williams pulled out a blue mat.

Sufficiently shamed, Williams ditched the mat, and Turtenwald confirmed his mojo was now back and he could go ahead and win.

It took about ten minutes for the banter to prove prophetic as Williams black-red monstrosity clashed with Turtenwald's white-black deck.

Owen won the die roll but, counter to the standard operating procedure in Magic 2012 draft, chose to draw first rather than start on the play. Both players kept their starting hands.

Williams led with Tormented Soul, which Owen dispatched with a Wring Flesh, but Williams simply replaced the Soul with another and upped the ante with a Fireslinger and, one turn later, a pumped-up Duskhunter Bat. 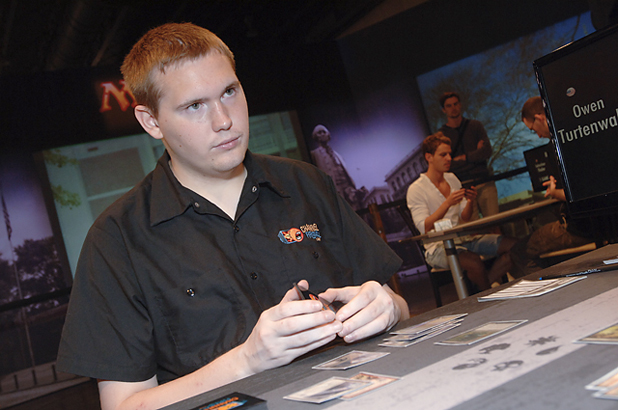 Turtenwald, meanwhile, made a Warpath Ghoul, though it couldn't actually block anything, not even Williams's follow-up Stormblood Berserker. Williams's deck was firing on all cylinders, while Owen missed a land drop and simply made a Reassembling Skeleton. When it and the Warpath Ghoul went to block the Berserker, Sorin's Thirst from Williams made the blowout complete.

Owen attempted to serve back with a Devouring Swarm, trading it with the Bat. It was all he could do as Williams kept pressing the attack with bloodthirsted beaters and unstoppable 1/1s.

Unfortunately for Owen, the Duskhunter Bat came right back with a Gravedigger. That was all it took for Owen to pack it in, possibly regretting putting Williams's blazing-fast deck on the play.

Now knowing what he was up against, Owen wagered drawing first wasn't the plan anymore and chose to play first instead.

For a while, the move paid off. An un-bloodthirsted Stormblood Berserker had its very tiny spirit Consume Spirit]consumed, and a 5/5 Gorehorn Minotaur disappeared under an Oblivion Ring. Meanwhile, a Tormented Soul continued to ping away at Turtenwald's life total.

Williams's next four-drop after the burly Minotaur was slightly less scary in the form of a Goblin Bangchuckers, while Owen built a board of two Devouring Swarms.

"It's a swarm," Williams quipped.

Not only was the game progressing quickly, but both players were playing at full speed, trading creatures left and right and throwing removal out to gain any tempo they could.

The Bangchuckers attacked and traded with one of the Swarms, and a Sorin's Thirst killed the other in response to Reassembling Skeleton. Owen managed to resolve a bloodthirst-enabled Duskhunter Bat and looked like he might have finally taken the tempo for the first time in the match. 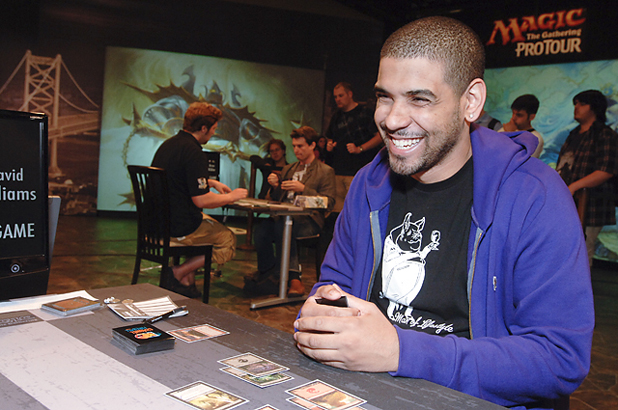 David Williams: faster than a Warpath Ghoul, able to leap Siege Mastodons in a single bound.

But Williams would have none of that. Gravedigger regrew the Stormblood Berserker even as Turtenwald finally took care of the Tortured Soul with his own Sorin's Thirst. Another copy of Sorin's Thirst, Williams's second, killed the Bat, and even Turtenwald's Siege Mastodon was one-upped by a Volcanic Dragon.

The Dragon did what Dragons do and took Dragon-sized chunks out of Owen's life, in turn allowing Williams to (finally) bloodthirst the Stormblood Berserker he had resurrected several turns back.

Brink of Disaster put the Dragon on hold, but Williams's follow up, War Storm Surge, threatened to do the deed on a stalled board anyway. When Williams attacked with the Dragon—letting it die to Brink of Disaster—in order to bring it back with a second Gravedigger. Turtenwald saw the 8 damage coming his way next turn and conceded.