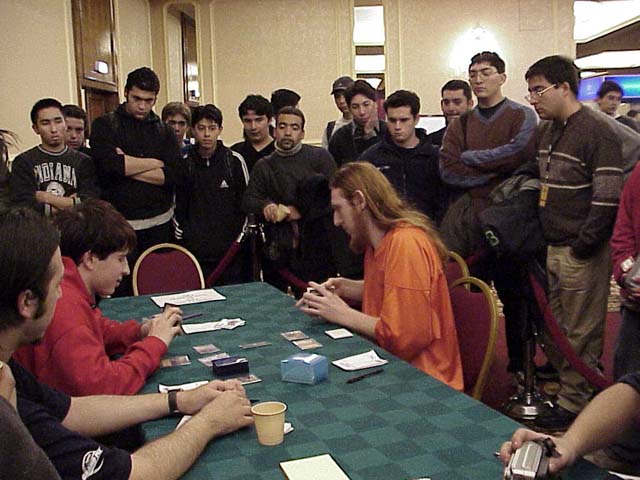 Rafael Le Saux is widely considered Chile's best player, and his success through round 6 is quite excellent. He joins current Latin American Champion Scott Richards at 5-1, with a Lobotomy driven Crosis-go deck of his own design. Scott piloted No-Mar, and both players have drawn the hugest crowd of the entire weekend, with locals crowding around Le Saux and a large fan base for Richards from all around Central and South America.

In the early turns of game one, both players drop creatures, Le Saux with a Nightscape Familiar and Richards with a Galina's Knight. The Nightscape Familiar allowed Le Saux to ramp up to a third turn Lobotomy, snagging to Excludes to leave Richards with a Dromar in hand. Over the next two turns, Rafael Recoiled Richard's only open blue mana at the end of the turn, and Richard's could only relay his come-into-play tapped lands and hope that Le Saux wouldn't take advantage of the moment. 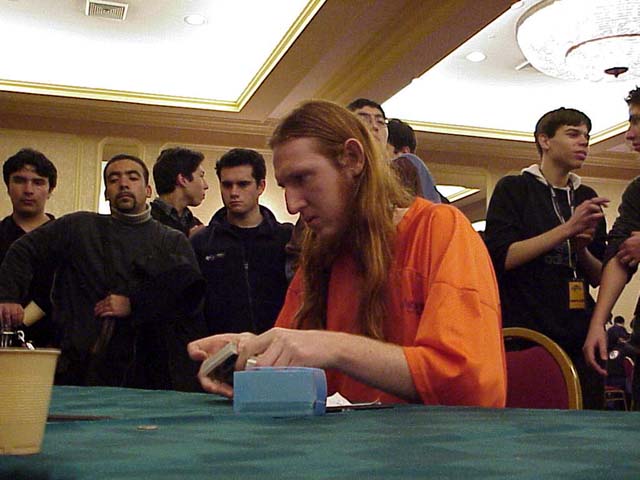 It was not to be. A turn 6 Crosis followed on the next turn by a Blazing Specter made quick work of Richards, and they moved onto game two. Le Saux brought in Jilt and Plague Spitter to deal with the Protection from Red on Richards side, will Richards brought in the typical complement of anti-blue cards, including Disrupt, Gainsay, and Lobotomy. Richards also brought in some Dodecapods to combat the Recoils from Le Saux.

Game 2 started out much more slowly. Richards made every land drop for the beginning turns, while Le Saux stopped at his fourth land, though he recovered a few turns later and began to bring in his attack.

After dropping a Nightscape Familiar into play, the attack started on the next turn with Lobotomy. Richards countered the Lobotomy but couldn't stop the next Lobotomy on the following turn when a huge counterspell war (including a total of three Gainsay) dropped all of the Dromar's Charms out of Richard's deck. Left with only land, Richards suddenly was facing down a Plague Spitter as well, but he soon dropped a Dodecapod in front of it to trade. 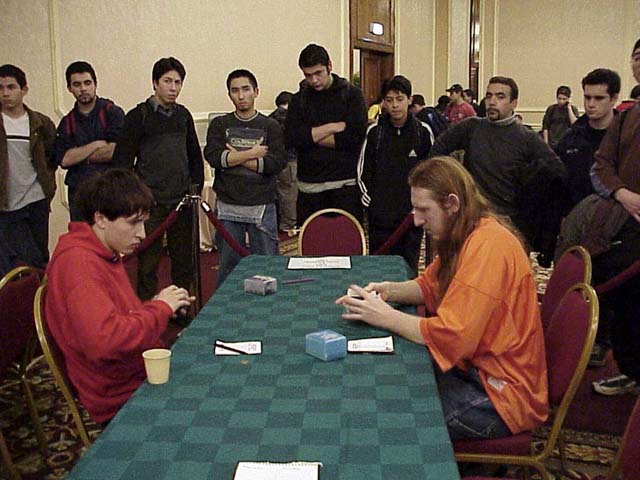 Both players were depleted from the Lobotomy counterspell war, and neither player was drawing anything that would help. A Fact or Fiction for Le Saux showed him five land, and while Richard's was able to get a Fact or Fiction off, he failed to find a counterspell to stop the Crosis that Le Saux played from the top of his library on the next turn.

Already low from a few early beats, the Plague Spitter, and his own land, the Crosis made short work of Richards.