Round 7: Red All Over 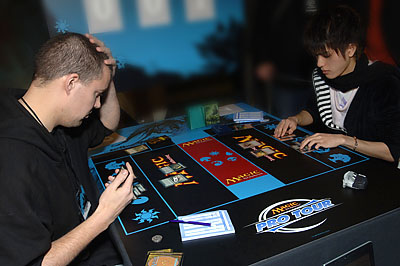 Jon Sonne and Kenji Tsumura think hard.enji Tsumura spent last season as Player of the Year "working on his Limited game." Looking at the impressive array of Grand Prix that he dominated, it would be fair to say that the work paid off. Here in Geneva, he sat down in Round 7 at the top of the standings with an undefeated record. Kenji even won a slap battle earlier in the day against Shuhei Nakamura, who deemed the diminutive Tsumura 'too strong' even to engage in battle with.

Fighting to take his place was Jon Sonne, who had a fairly quiet 2006 following a strong 2005, when he was a US National Team member. He clearly seems to have this format worked out though, with his 6-0 start proving a strong testament to the prowess of the double Grand Prix winner.

Kenji got the one-two in the early game by winning both the coin flip to decide which side to sit on, and the die roll to go first.

He led with a Swamp and had a turn-two suspend of Mindstab, while Sonne passed with just an Island and a Forest up on his second turn. Kenji's red-black deck accelerated with a Foriysian Totem, while Jon went with Yavimaya Dryad to build his mana base. The 2/1 got first blood after Kenji passed for his turn, and Sonne followed up with a morph, which was immediately hit by a Strangling Soot from the former Player of the Year.

The first creature for Tsumura was Nightshade Assassin, revealing Bog Serpent to kill Sonne's only remaining creature. Somehow the red-black deck was the one to get going with card advantage effects in the early game. At the end of turn, Sonne used Evolution Charm to fetch a Mountain, giving him access to all three colours in his deck. He licked his lips as he carefully studied the board and his hand of five cards. Mindstab was going to hit next turn, so he had to be wary of not playing too much.

Jon played Telekinetic Sliver and passed. One card he was happy to discard when Mindstab hit was Fiery Temper, which killed Kenji's Assassin. Kenji had plans too, though, as he used Lightning Axe on Jon's Sliver and then powered out an Empty the Warrens for eight goblins, represented by signed Rich Hoaen Pro Player Cards.

One of these goblins was offed by Firemaw Kavu, but the others kept rumbling in, being joined by Prodigal Pyromancer. The Kavu traded with a ping and some tokens, taking down the pinger with it, but the Goblin offensive proved too much for Jon, and when Foriysian Totem started coming in too, it was all over. 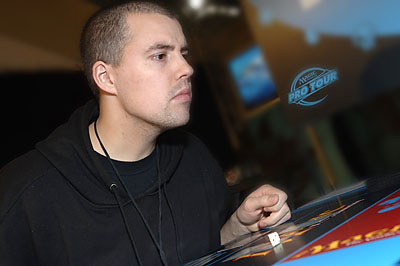 You could say he has a Sonne disposition… but only if you're pronouncing his name correctly.

On the play in Game 2, Jon kept, having drastically sideboarded for the second game. Each player had a two-drop, with Sonne's Thallid Shell-Dweller happily keeping Thick-Skinned Goblin at bay. A Yavimaya Dryad accelerated things for Sonne, while Kenji chose to play his Simian Sprit Guide as a creature rather than a piece of acceleration. After Sonne's 2/1 forestwalker traded with Kenji's Magical monkey, Sonne followed up with a Might Sliver.

All Kenji had in answer was a Coal Stoker, whose mana was sunk into Thick-Skinned Goblin's ability. Sonne played a Reflex Sliver, and made a big swing. He even had the Might of Old Krosa to punish Kenji's double block. Things looked very good for the American, who lost the 1/1 Saproling coming from his defender to a Strangling Soot but ultimately won the game as Kenji drew and realised he couldn't fight the powerful Sliver presence.

For the deciding game, Sonne elected to mulligan his opening seven. Kenji started out with a turn-three Prodigal Pyromancer and a turn-four Foriysian Totem, activating the Totem and swinging a couple of turns later. Still Jon had no play.

His first creature was a Bonesplitter Sliver, which Kenji Enslaved, only for it to be killed by Sonne's Firemaw Kavu soon after. Kenji kept on plugging in with his Pyromancer, though, and played a Mogg War Marshal to build his board. Sonne's Kavu eventually traded for a couple of goblins and a Pyromancer that pinged it, again leaving the American's board bare, while Kenji played another Goblin, this time of the Thick-Skinned variety. Tsumura was sitting high at 20 life to Sonne's 11 at this point, forcing action from Sonne some time very soon.

A Thallid Shell-Dweller met with a thumbs up from Tsumura, with Yavimaya Dryad further improving things for Sonne. These both shrank back a little though when Flamecore Elemental came out, likely safe from echoing thanks to Kenji's little 2/1 that could. The 2/1 for Sonne was a Goblin Skycutter, which by comparison seemed a little weaker. 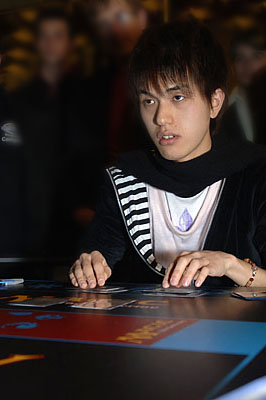 In addition to his better-known titles, Kenji is the reigning world champion of looking nonplussed.

Kenji activated his Totem and swung with the team, causing Jon to hold his head in his hands as he contemplated the best blocks. In the end, he went with his Dryad against Thick-Skinned Goblin and a double block of Goblin Skycutter and Thallid Shell Dweller on Foriysian Totem. A Might of Old Krosa looked likely to make this block a good one, but Kenji had Dead (of Dead/Gone fame) with which to take Goblin Skycutter out of the equation and force through damage without losing much board position. He even had a Rift Bolt to suspend to make life even tougher for Sonne.

There was still fight in the American, though. With lots of land already in play, he made an Island. Evolution Charm brought back Firemaw Kavu, which killed a naked Thick-Skinned Goblin. Dream Stalker then bounced the Kavu, killing Flamecore Elemental. Sonne was low on life, but looked to have a shot.

It turned out that Sonne wasn't as safe as he thought, though. Kenji had Pthisis and the necessary Swamps to play it, which was enough to finish off the American.