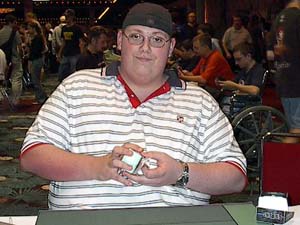 Rich "Cartman" Herbert is a seventeen year-old Magic player from Baltimore, Maryland who has started out this Block Grand Prix and impressive 6-0 after finishing in the top 4 of Star City's Power 9 Type 1 tournament last weekend. To say seeing a kid who's considered a "Type 1" player sitting at the top of the standings is a surprise to most fans would be an understatement. Gerard Fabiano is a long-time New Jersey pro who has had a very solid year thus far and is guaranteed to finish in the money for the end-of-the-year Pro Tour payout. Both players played nearly identical Affinity decks, with Aether Vials in the main and Moriok Riggers plus Electrostatic Bolts in the sideboard. Games 1 and 3 in this match were closely contested battles that Cartman managed to win thanks to Arcbound Ravager and Disciple of the Vault superiority, while the second game was a just a savage beating administered from Fabiano's deck.

Fabiano helped thin out the feature match crowd by telling jokes while shuffling his deck.

Game 1 started out fast, with both players hitting all their land drops and matching each other creature for creature, in spite of a mulligan from Gerard. Fabiano's Cranial Plating plus two Blinkmoth Nexus gave him the aerial advantage, but Cartman quickly assembled the mini-combo of Arcbound Ravager and Disciple of the Vault. Fabiano put Cartman into a must-block situation, as a Nexus with Plating would have killed the big man, but the attack enabled Cartman to play a land and swing back with two Ravagers and an Atog to put himself up a game.

After the deliberate pace of game 1, Game 2 seemed to go by in a flash. Another mulligan from Fabiano and a pair of them from Cartman resulted in a second turn of Ravager, Frogmite, Frogmite from Fabiano to Cartman's lonely Arcbound Worker. A Disciple of the Vault a turn later from Fabiano essentially ended the game, though it would take two more attack steps to finish things.

For game 3, the tempo once again slowed, as both players got off to slow starts, eeking out damage and card advantage where they could. Gerard put through fourteen points of damage in the air, as Cartman could not find a blocker to another Nexus wearing a Nim hat. Unfortunately for Fabiano, Cartman again found the mini-combo of Arcbound Ravager, except this time it was escorted by two Disciples, putting Gerard in a position where he had to draw a Ravager or an Atog in order to win, or Cartman would use the stack during Gerard's upkeep to burn him out with Disciple effects. Gerard drew his last card, grimaced and played a Frogmite before passing the turn back to Cartman, who simply played a land and passed the turn back, killing Gerard before he could draw again. 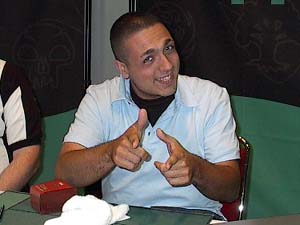 After the match, the TOGIT members surrounding the feature match area kindly pointed out the fact that Cartman had actually given Gerard an extra draw phase, provoking Cartman to say, "Hey, I guess I did. I've had a pretty good couple of weeks."

Gerard found himself somewhat frustrated at the results of the close games, but teammate Osyp Lebedowicz assured him that he played the last game correctly, and pointed out the fact that Gerard was still guaranteed a spot in day 2 with at least a draw next round.