Morgan Douglass is alone in a sea of Snakes, Myojins, and Fox Clerics as the only ninja master on Day Two. He and Gabriel Nassif chose the road less traveled for this weekend with a blue-white aggro-control deck featuring plenty of one drops to parlay in Ninja of the Deep Hours and Mistblade Shinobi. Nassif way waylaid by the middle rounds Friday but Morgan ended Day One at 5-1 and was one of only 33 players with less than two losses in this triple-elimination tournament. 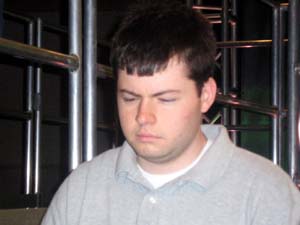 Morgan Douglass had many ninja in his back pocket.

Morgan's performance this weekend may make this deck as popular for the coming Block Constructed season as his blue-white take on Mind's Desire became in Extended. After the Ruels chose not to play with this deck in Philadelphia, leaving only Douglass, Nassif, and Ruud Warmenhoven. Ruud went 0-3 and Nassif went 1-3. As Morgan's bankroll grew with each passing round, he could only shudder at Nassif's performance. "Who would have thought that a 20 percent split with Nassif at a Constructed event could turn out this badly?"

Before you scoff at the idea of a Ninja deck in Constructed, consider this: last weekend in Waterbury, Conn., a deck called Wu-Tang Fish which featured Flying Men, Icatian Javelineers, and Ninja of the Deep Hours took the top honors in a 140+ person field. If Morgan managed to string a few more wins in the early rounds of Day Two, he would be in a position to do the same here this weekend.

Standing in the way of that plan this round was Richard Hoaen. Of all the members of the North American/Dutch supersquad, it was Richie with the best record after Day One. That came as no surprise to any of the members of his vast team. They claim he has tested and prepared for this event more than any player in the tournament.

As the two players sat down to play, Rich explained to Morgan that he had not heard the announcements at the start of the round. "I had my headphones on when they called the feature matches. I was waiting by the table and couldn't figure out where you were."

Morgan smiled, "It was the ninjas."

The opening game saw Richie start on the play with Sensei's Divining Top and Orochi Sustainer. Morgan led off with Isamaru, Hound of Konda and when Rich didn't block, it turned out to be Ninja of the Deep Hours.

Rich took a pair of hits from Ninja of the Deep Hours and Morgan's hand was so swollen with cards that he discarded Hound with three mana open. Rich knew what that meant but had to take a shot anyway and tapped out for Kodama of the North Tree, "Top or bottom?"

When Morgan confirmed that where there is smoke there is Hinder, Rich shook his head and braced for another hit from the ninja, "This is going well."

Morgan was in complete control of the game and played Lantern Kami and Devoted Retainer but left up enough mana to represent another Hinder. Hoaen was getting smashed but everyone could not help but chuckle at the cards that were being played. It was clear that Morgan's deck was one of the few completely unexpected archetypes on the weekend.

Rich made a half-hearted attempt at Final Judgment but Morgan had the Hinder to put the fork to Hoaen, who had a sluggish draw against Morgan's exceptional draw. Douglass consoled his friend and opponent, "That was not a very good game."

"Which one was that?"

Morgan talked to his deck as they entered the second game, "C'mon Deep Hours. I just want turn-two Deep Hours again. Is that too much to ask for?"

Rich was willing to concede the ninja, "It's fine if you don't have Hinder."

There is something very pleasing about covering two excellent players. More often than not they go about their business with a minimum of fuss for the vagaries of the game. Richie just shrugged as he could not keep his opening seven and as he shuffled for six better cards. He tried to figure out the recipe for Morgan's deck and asked, "How many Shurikens are you playing?" 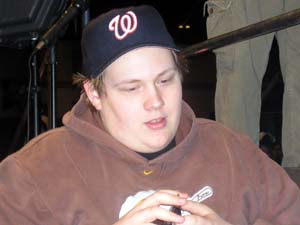 Rich Hoaen was hurt by a slow draw.

"Just the two in the board," explained Morgan. "It's actually not very good. They are just good against White Weenie."

When Morgan ran the old switcheroo of Lantern Kami into Ninja of the Deep Hours for the wished-for turn-two play, Rich mock-glared across the table, "I hate you."

Richie had another slow draw with Sakura-Tribe Elder and Sustainer as his only plays. Or should I say another 'slow' draw. It only seemed slow in contrast to Morgan's very aggressive deck. On turn three, he replayed the Lantern Kami and dropped a Jitte.

Morgan equipped the Lantern Kami and fished out some change. Devoted Retainer signed up for a tour of duty and Richie sacrificed his Elder at the end of turn four for seven mana on the fifth turn of his 'slow' draw. Morgan nodded, "He's going to Final Judgment."

Richie brightened; perhaps Morgan knew something that he did not, "I hope so." Instead Hoaen played Yosei and passed the turn. Morgan seemed disappointed, "That's it?"

Morgan considered his play. He was holding Mistblade Shinobi and could bounce the dragon or Sustainer and kill the other with a boost from Jitte. He considered only attacking with the potentially 5/5 Lantern Kami but finally he just shoved them all in the middle. Rich put Yosei in the way of Deep Hours and Morgan returned the Sustainer with the sneaky Shinobi. He killed the dragon with three Jitte counters. He recommitted his Retainer to the board - it would be his only untapped permanent next turn. Rich clucked his tongue.

Rich passed the next turn with no play and took a beat from the Retainer. Myojin of Cleansing Fire presented a formidable obstacle for Morgan to get around next turn. He got in for one with his Kami and went to three counters on Jitte.

Richie took a hit for one before Morgan finally baited him into cashing in his divinity counter by pumping the Kami once with Jitte. Douglass had a handful of stuff and reset with Lantern Kami and Isamaru, Hound of Konda. He equipped the Hound.

Rich had nothing and left his giant Myojin back. Morgan moved the equipment to Lantern Kami and swung for five in the air and then moved it back to the pooch.

Rich just strummed his fingers on the table. He had two spells and was not sure which one was the more relevant bait for a Hinder to get the other one through. He offered Final Judgment and just wanted to know where to put his card, "Bottom?" With the Hinder cleared, he 'disenchanted' the Jitte with one of his own.

Lantern Kami became Higure of the Still Wind and Rich fell to three. Morgan fetched up another copy of the legend. Rich drew Time of Need for Patron of the Kitsune. He attacked with the Myojin and crept up to four life. Morgan - who had gained life from the Jitte - fell to 16.

Another attack with Higure found Deep Hours and Morgan played it and Lantern Kami the honest way. Rich played Jitte and moved it to his Myojin. His attack with both brought him to four. Douglass fell to 9.

Morgan had Terashi's Grasp for the Jitte and Rich was not sure how he wanted to respond - he could kill the ninja, gain some life, or split the difference and take down Lantern Kami and gain two. "I am probably going to be gaining some life."

Once that all resolved, Morgan played his own Jitte and equipped the Higure. He attacked with everyone but the Hound and got another Deep Hours, drew a card, and put two counters on Jitte. He moved the Jitte to the Hounds.

Another nice thing about watching two players as accomplished as these two is their economy of motion. They like and respect one another and assume they will each make the correct plays. Rich did some quick sums on the back and forth of the attacks and then extended the hand.

As they filled out the result slips, Rich had some advice for Douglass. "Remember when you killed my Yosei? You could have just waited until after combat and pooled your mana when I used the ability."

"I didn't have anything to cast but the Retainer and I had Plains," responded Douglass.

Richie pointed out that he could have used the pooled mana to equip the Retainer with Jitte and he would have had a more efficient series of turns. Morgan agreed and filed that away for the later rounds. He was now 6-1.

"Another 75 minutes before you can head back to Blacksburg," laughed Ted Knutson. Morgan already had his bags packed and was ready to head home as soon as his tournament was over. Morgan is still a student and Monday's exams loomed over his head. Don't worry about Morgan though, he is a smart guy. You'll be reminded of that again when his unlikely ninja deck becomes a staple of the Block Constructed PTQ scene in a couple of months.