Round 7: Richard Hoaen vs. Tsuyoshi Ikeda 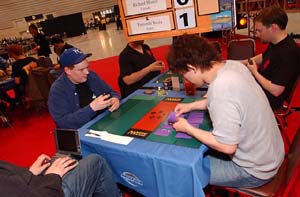 It's old school vs. new school even though neither player is very well known for their performances. It seems like Tsuyoshi has been playing since the dawn of time and Richard recently blipped onto people's radar with a Top 8 finish in the MODO World's Qualifier. Both players are 6-0 today and the winner will be the only undefeated player after a long day's work.

Richard mulliganed and kept a hand that he was clearly dissatisfied with. Ikeda stalled on land, missing his third drop while Hoaen played three Swamps and a morph. Ikeda found a land and played his own. More swamps for Hoaen = Screeching Buzzard but he wasn't happy about it.

Ikeda shocked the morph and attacked with his own evening up the totals at 18 and played a Mistform Dreamer. No land number five for Hoaen but he did have another morph. Ikeda killed it with a Marauder and swung in for four. Crown of Suspicion killed the Dreamer and Hoaen glared at his deck challenging it to deliver white mana. He never found the white mana he needed and Ikeda finally killed him with a cycled Choking Tethers, "That was a nice one!"

Hoaen's deck showed up for Game 2 and he got off to a strong start with a Festering Goblin and a Wretched Anurid that was sided in for this game. Battlefield Medic joined the party and all Ikeda could muster was a morph to stare down Hoaen three creatures. The morph traded with the Goblin but the Anurid plugged away. Ikeda never found an answer and it eventually killed him with an assist from a Whipgrass Entangler. 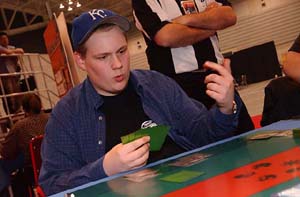 Both players had land and spells this game. Hoaen played Battlefield Medics on the second and third turns while Ikeda played morphs. Screeching Buzzard came out for the Canadian and the Japanese player made a Slateback straight up. Things got interesting when Hoaen played a Corpse Harvester and a Festering Goblin. When Hoaen tried to kill a Mistform Seaswift EOT, an unmorphed Master of the Veil saved it by turning it face down. "Better than Willbender," laughed Hoaen.

Ikeda threw a Searing Flesh at Hoaen's dome dropping him to 10 but Battlefield Medic times two along with Whipgrass Entangler kept him form mounting an offense. Once Hoaen drew a Withered Wretch hew was able to use his Entangler for four a shot and he was able to 'Falter' his way to victory.

Rich Hoaen enjoyed the roar of approval from the Canadian crowd along the rail as he emerged as the only undefeated player on Day one.