Round 7: Rickard Österberg vs. Gert Coeckelbergh 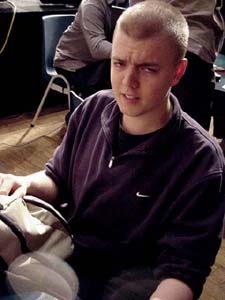 Both players drop lands early on until Rickard cast Words of Wisdom with an Island and a Tainted Wood he then cast Treacherous Wolf and ends his turn.

Gert on the other hand decided to go on the offensive with Anger going through his opponent's defences unblocked. Coeckelbergh then summoned a Soul Scourge and finished his turn.

Österbergh then cast a Crippling Fatigue twice and attacked for three. Balthor the Defiled entered in a blaze and took two life from Rickard's life. With Psychatog and a Wolf on the table Österberg continued to attack and cast Waste Away on Balthor. His opponent decided to do the same and played a Fiery Temper on the Wolf. Afterwards he cast an Ember Beast only to see it stay at home.

On the other side of the table Psychatog also stayed home in case of a bigger threat. A Scrivener on Rickard's side gets back a Waste Away and attacks next turn.

Gert played a Treacherous Wolf and a Frightcrawler now facing Psychatog, Scrivener and Zombie Assassin—all of which attacked the turn after.Österberg netted himself three cards via Keep Watch before two of his creatures went on to the graveyard. Cabal Torturer entered play and a Reckless Dreams for one returned the Treacherous Wolf he had to his hand. 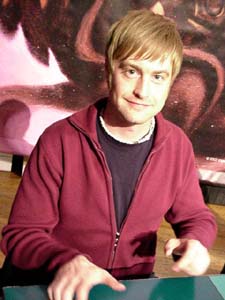 Rickard cast a Psychatog on his third turn, which was met by a more threatening Whispering Shade. Later on a Pardic Firecat joined the Shade as it served for one.
He attacked with his Psychatog, which was blocked by the Firecat.

In response, Gert cast words of Wisdom discarded an Island for the tog and removed them from the game to kill the cat. Afterwards he cast Crippling Fatigue on the Shade. His next turn he cast Earsplitting Rats and discarded yet another Island. Gert attacked with his freshly cast Mad Dog which got blocked by the Dreamwinder.

When a Volcanic Spray hit the table it was clear to Rickard, he had to regenerate his Rats. And so he did. Gert now controled a Wolf with threshold while his opponent cast a Giant Wharthog to join his Psychatog. Shortly after, Coeckelbergh summoned a Soul Scourge bringing his opponent down to 15.

After some deliberation Österberg finally decided to flashback a Crippling Fatigue to kill the Scourge, sacrificed his Bog Wreckage and enchanted his Wharthog with Ghostly Wings. All his opponent could do was watch and hope for a miracle.

The miracle didn't arrive and he scooped.