Round 7: The Right Read

After sweeping up Pro Tour–San Diego with teammate Jacob Van Lunen, Chris Lachmann has been eager to prove himself in singles competition. He's off to a great start, having gone undefeated in standard with Green-Red Big Mana, and drafting a truly savage Faerie deck, taking his first round with ease. His opponent is Japan's Flash, Katsuhiro "Hotstepper" Mori, also undefeated so far. Mori cruised through standard with the Japanese black-green Elf deck, but admitted that this was only his second draft since Yokohama.

Lachmann mulliganed into a strong start of Nightshade Stinger with Spellstutter Sprite and Peppersmoke at the ready, but Mori refused to bite, holding back his Stonybrook Angler. Lachmann missed his third land drop and swung again. 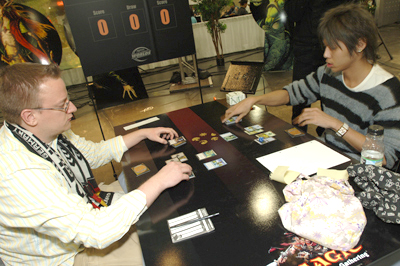 Chris Lachmann squares off against Katsuhiro Mori. Not pictured: Garruk WildspeakerMori had no such difficulty, powering out Steambed Aquitects then passing with four mana open. Lachmann naturally held back his Stinger, having found a third for Paperfin Rascal, and won the clash. Mori showed the expected Sentinels of Glen Elendra. He put the boots in with a Merrow Reejerey, swinging for 5 and playing out Stonybrook Angler.

Lachmann was firmly on the back foot, but he was just about to find out how bad things were. He played Thieving Sprite for two cards. Mori mistakenly showed him all three: Ethereal Whiskergill, Island, and Garruk Wildspeaker. Naturally, Lachmann didn't get the option of taking the planeswalker. Mori set up an Overrun turn, and that was that.

Lachmann kept a two-lander on the play, and again opened with Nightshade Stinger. Again, Mori made the right read on his two open land, playing out his Angler after a moment's agonizing. Lachmann had no Spellstutter. Lachmann drew his third land on time, but it was Shelldock Isle, putting him off-pace for a turn. Mori hit, summoned Steambed Aquitects, and passed it back.

Lachmann had no fourth land, and Pestermited Mori's lone Forest during upkeep. Mori rewarded his efforts with a Merrow Reejerey and 5 to the chops. Lachmann peeked at three of Mori's four cards with Thieving Sprite, and stole Dreamspoiler Witches over two lands.

And here, Mori showed his lack of practice. He swung in with Reejerey and Angler, then pumped with his Aquitects after blocks, dodging the 3 power worth of blockers. Of course his play for the turn was Inkfathom Divers, which would have let the Reejerey tap down the Pestermite and enabled an extra point of damage.

It seemed insignificant there, but then Lachmann showed him a Sower of Temptation, stealing his islandwalker and building a fast clock. Mori could activate his Aquitects on themselves, then untap them with the Angler and get in for 4. With the extra point leaving Lachmann at 8 instead of 9, he'd given him an extra turn.

Of course, he had plucked Ethereal Whiskergill to stop up the skies, so it didn't matter as much as it could have. Lachmann was short on answers. He hit for 3 and made an end-of-turn Wydwen, the Biting Gale, but with no removal, he couldn't punch through for the win.