Guillaume Wafo-Tapa of France and Shuu Komuro of Japan, both at 5-1, sat down for the final round of Day 1.

Komuro led the first game off with an Elvish Handservant and a Leaf Gilder, which is always a quality start for an Elf deck that tends to want as many Elves in play as possible. His Leaf Gilder allowed also allowed him to get a Cloudcrown Oak into play before Wafo-Tapa had a third land. Wafo-Tapa didn't let himself fall too far behind, though, and a Weight of Conscience turned the Oak into a treehouse. 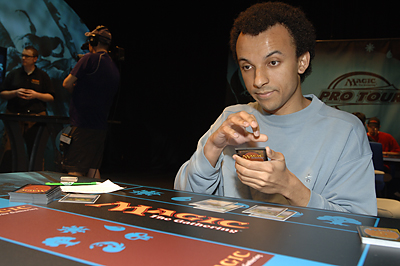 Guillaume Wafo-Tapa keeps his cool...Wafo-Tapa simply drew his card, played a fourth land, and passed the turn, which for his blue-white deck could signify anything from Neck Snap to some sort of Faerie. When Komuro attacked with his Handservant, Wafo-Tapa revealed that he was holding a Sentinels of Glen Elendra. Komuro was expecting this, though, and killed it with Violet Pall before it could block. Wafo-Tapa just shrugged and moved onto his turn.

Wafo-Tapa's freshly played Drowner of Secrets really gummed up the ground, leaving Komuro only able to attack with his Faerie Rogue token. After getting in with the token, Komuro dropped a Wren's Run Vanquisher and a Ghostly Changeling into play, both of which would be capable of getting by the troublesome blocker.

Wafo-Tapa had more up his sleeve, though, and he played not one but two copies of Stonybrook Schoolmaster, which provoked a little chuckle from Komuro. Wafo-Tapa could churn out tokens every turn thanks to his Drowner, which would just further add to the ground stall. On Komuro's attack, the two freshly made tokens ate his Handservant, leaving him with the two three-drops, a Leaf Gilder, and his Faerie Rogue token to attack with.

Wafo-Tapa played a Plover Knights on his turn, giving him a creature that could start whittling away at Komuro's forces instead of continually chumping like the tokens would be forced to. Regardless, combat is still tricky against a green-black deck, and Wafo-Tapa went into the tank on Komuro's next attack. A Peppersmoke from Komuro would have allowed his Vanquisher to take out Wafo-Tapa's Plover Knights had he not been prepared with a Stream of Unconsciousness. Komuro nodded at the play and then played Lignify on Wafo-Tapa's Drowner of Secrets. At least the mill clock had been stopped.

Wafo-Tapa broke the game wide open on the following turn when he played a Judge of Currents and a Distant Melody for a whopping six cards. Komuro did have Wafo-Tapa down to 4, though, and he kept sending in the troops. A Gilt-Leaf Ambush followed by an alpha strike cut Wafo-Tapa's team in half at the cost of half of Komuro's. He also played a Walker of the Grove, evoke style, to net himself a 4/4. Without access to the Drowner of Secrets, Wafo-Tapa's life total was set, and he couldn't make any more (mer)men with his Schoolmasters. Despite this fact, he had outdrawn Komuro by a huge amount, and Komuro was out of steam. When Wafo-Tapa got rid of the Elemental with another Weight of Conscience, Komuro conceded.

Game 2 looked eerily familiar in the opening turns. Komuro built a nice little Elf army comprised of an Elvish Handservant, Leaf Gilder, and Elvish Branchbender. Wafo-Tapa managed a Stonybrook Schoolmaster that would hopefully find a little accompaniment soon if he was to win this game. After Komuro made an Ambassador Oak on his following turn, Wafo-Tapa was in danger of falling behind.

Luckily for him, Weight of Conscience dealt with the Branchbender, but not before he played a Judge of Currents. He activated Weight of Conscience with both of his guys and netted himself a couple of life, a 1/1 Merfolk Wizard token, and removing Komuro's biggest threat. Not a bad turn.

Komuro was ready with some removal of his own, that is assuming his Lys Alana Scarblade was able to survive until his next turn. Komuro hadn't played a fourth or fifth land, so there was a fairly good chance that one of his cards in hand was an Elf that could get rid of either of Wafo-Tapa's pesky Merfolk.

If Wafo-Tapa had an answer to the Scarblade, he wasn't planning on showing it until after he attacked. The Schoolmaster and one of his pupils hit the red zone. Komuro decided to double block with a Handservant and his Elf Warrior token. He hesitated a second and almost changed his mind, but finally decided that the block stood. Wafo-Tapa had the Stream of Unconsciousness to keep his Schoolmaster alive and kill Komuro's Handservant. He followed that up with the "on switch" Drowner of Secrets and passed the turn.

Komuro, unsurprisingly, did have the Elf in hand needed to off the freshly played Drowner, as well as a fourth land. That let him get a Cloudcrown Oak into play while sending Wafo-Tapa's Judge of Currents to the graveyard with a Peppersmoke. That left Wafo-Tapa facing a decent sized Treefolk and friends with a Stonybrook Scoolmaster and a preschool class. Not exactly a fair fight. 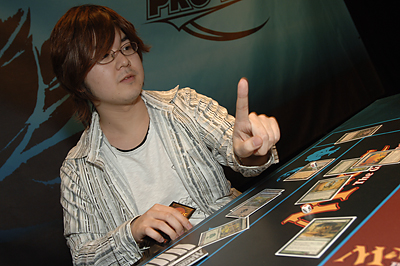 ...even in the face of Shuu Komuro's wagging finger.Wafo-Tapa did have some fat of his own, though, and the Wandering Graybeard that he played on the next turn had the added benefit of having kinship for Wizards, which the overwhelming majority of his Merfolk were. Komuro maintained his theme of delayed removal with a normal-size Nath's Elite.

A Weight of Conscience once again served triple duty for Wafo-Tapa by netting him a Merfolk token, tapping his Schoolmaster so it didn't have to block the Elite, and killing the Scarblade. Everytime Wafo-Tapa has played that card, it's been a Tropicana Twister—all different kinds of juice. Komuro still decided to send his Elite in, though, deeming the Graybeard a worthy target for the Elite to take out, which is completely true. If he was going to find a way to win this game, it would be easier with Wafo-Tapa at a life total less than a brazillion.

Wafo-Tapa finally got something of substance on the board in the shape of a Plover Knights. When Komuro sent his Cloudcrown Oak in to battle on the following turn, Wafo-Tapa decided to send the whole gang in to meet him. One Stream of Unconsciousness later, and Komuro was left with only timber. All he had to replace it was a Ghostly Changeling, but that was better than nothing.

Things over the next few turns were interesting. Wafo-Tapa had three cards in hand to Komuro's one, but all he had in play was three Merfolk Wizard tokens, a Schoolmaster, and a Plover Knights that had to attack each turn if he had any hope of actually killing Komuro. Komuro had a few more men, which happened to be a bit bigger, and a fairly decent clock of his own. The next turns simply consisted of Wafo-Tapa attacking with his Knights and not doing anything else, and Komuro attacking with his Ghostly Changeling and doing nothing else. Riveting. Eventually, though, Wafo-Tapa drew a Triclopean Sight and used it to fend off the Ghostly Changeling. After Komuro drew a few more lands, and Wafo-Tapa got in a few more beats, Komuro was unable to stop the damage from rolling in and conceded the game.