Round 7: Scott Wills vs. Dirk Baberowski 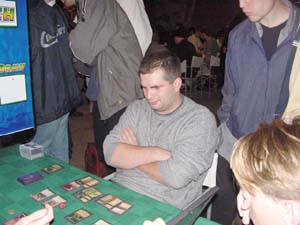 After a slow start things got pretty exciting this game. With a couple of early creatures that just stayed at bay Scott decided it was time for Centaur Glade. He then played a Chain of Plasma. It went over and over and when both players were empty handed the board was cleared except for lands and Scott's Centaur Glade Drik joked: "No cards in hand and the whole board is empty... except for Centaur Glade? Not a good position to be in."

It wasn't a good position to be in at all until Dirk started to play of the top; which he did very well. Dive Bombers, Snarling Undorak, Krosan Groundshaker (which got Cruel Revivalled right away), Mobilization and Crowd Favorites followed each other. Scott on the other hand did manage some good of his own drawing some decent creatures and Dragon Roost. The Roost didn't help him a whole lot though as he couldn't afford to make any dragons as they are six mana to produce. And in the end even the two centaurs Scott was able to make couldn't race the mobilization and the Dive Bombers. 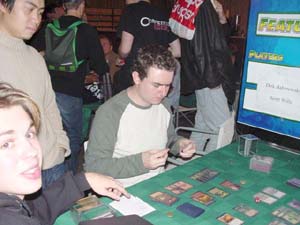 Scott decided to play first but had to mulligan. He did keep his second hand though. Dirk however was the first to play a good card being a Wirewood Savage which is huge in green on green matchups. When Scott attacked with a Nosy Goblin next turn Dirk just blocked with the Elf and prevented 1 with a Battlefield Medic. The Goblin just died and Scott wasn't able kill the Savage off. After the match he told me he was rushing and didn't pay enough attention. Scott made his Centaur Glade again but at that time Dirk was putting him under a lot of pressure with Venomspout Brackus, Goblin Machinist and a morph creature.

Dirk sent all his guys and when the Machinist didn't get blocked activated it revealing Crowd Favorites dealing an additional seven points. This put Scott at two and next turn it was all over. Dirk even forgot to draw two cards from his Wirewood Savage that game; he just didn't need it.