"Yeah, the guy to my left in the draft apparently hadn't drafted the format before. I just kept shipping him all the black goods and they somehow ended up in your deck," Osyp sighed. 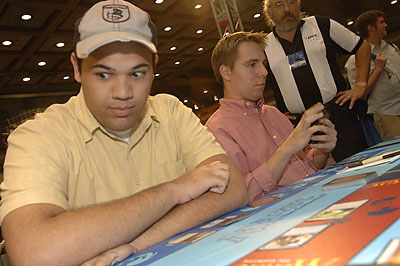 Osyp started out strong with a suspended Infiltrator il-Kor and an Outrider en-Kor. A judge offered to clean up the paper scraps Osyp had chosen to use as his counters.

"If they're quarters, yeah. Then I can steal them after," Osyp shot back with a grin.

Jacob went to Judge Unworthy the 3/1 during Osyp's attack, and was a bit dismayed to find three land. Dismayed not only because he hit three land, but also because he didn't have any more land in his hand. He decided to put the three lands on the bottom of his deck and flipped up an Augur of Skulls to kill the Infiltrator.

After Osyp Careful Consideration-ed and added a Malach of the Dawn to his side, Jacob, still on only three land, used Stupor to clear Osyp's hand out. An Aven Riftwatcher from Jacob stemmed the tide for a little while, and a Sunlance killed Osyp's freshly cast morph. A Stonecloaker from Jacob bought him an attack step and let him recast his Riftwatcher. While he was doing a good job of not dying, Jacob was not really able to do anything to stop Osyp from mounting his army.

During Osyp's next attack, though, Jacob was able to swing things in his favor. A Death Rattle killed Osyp's Malach, and that left Osyp with a board that was at parity to Jacob. Factor in the fact that Jacob actually had a hand, and things were starting to look up. Both players played matching Lucent Liminids, but Jacob, with his higher card count, was able to continue adding threats to the board in the form of a Spitting Sliver and a Sinew Sliver. Osyp found another random dork in Spiketail Drakeling, but he was still just working with the top of his deck. 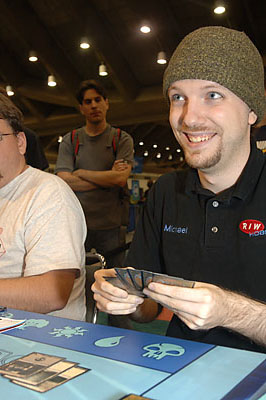 With the board now in his favor, Jacob began the arduous task of taking Osyp down by sending his Stonecloaker into enemy territory. A turn later and the Liminids met mutual demise. The following turn, Jacob took the board completely over by sending his team into the red zone. Osyp blocked the Stonecloaker with his flier and the Sinew Sliver with his en-Kor. When Osyp went to redirect the first strike damage, Jacob had another Death Rattle to effectively kill Osyp's whole team. When Jacob dropped his Sacred Mesa on the table, Osyp packed it in.

Osyp started this game out strong again with a suspended Infiltrator il-Kor and a morph. Jacob matched his fast start with a Sinew Sliver and an Ichor Slick to kill Osyp's face-down Shaper Parasite. That's some serious virtual card advantage. A Stupor from Jacob met an Erratic Mutation for his Sinew Sliver, but managed to get a Rough // Tumble and a Bound in Silence. Jacob rebuilt, though, with a Lucent Liminid and a Death Rattle for Osyp's lone Infiltrator. Jacob's plethora of black removal kept him ahead in the race as another Ichor Slick took out Osyp's freshly cast face-down Whip-Spine Drake.

Osyp wouldn't go down easily, though, and he rebuilt with two morphs and an Aven Riftwatcher to match the Riftwatcher and Spitting Sliver Jacob played. Osyp ate an attack by unmorphing a Lumithread Field, which also allowed his whole team to survive the assault. However, he was still sitting on a less than equal board and was down a card. After drawing his card and thinking for a few minutes, Osyp decided he wasn't long for this game and saved Jacob the trouble of killing him.