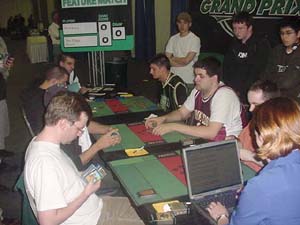 "So we've got the New Jersey hookup versus the poker kids," Ted Knutson comments, watching the match. When asked where his team name came from, Scott said, "We pulled 3 cards out of a box, and they were Slay, Pillage, and Massacre. When we replaced one of the members, it became Slay, Pillage, Gerard." Scott also volunteers that his team's most significant Magic-related accomplishment was finishing in the Top 8 at Pro Tour: Boston last year. "I'd travel more for Magic," Scott said, "but unfortunately, I have a real job and can't do that all the time."

"I've hit Brock Bottom," says Brock Parker when asked about his team name. Unfortunately, I can't pry any more information out of him.

Scott plays Glory Seeker and so far, his deck looks like it's completely white. Maybe he just hasn't found his second color yet, I don't know. He plays a fourth plains, and Brock answers with Aphetto Alchemist.

Looks like Scott's found his other color, which happens to be blue. A second island joins the first as Scott reviews his options again...and again...and again. Scott's quickly falling behind to Brock's offense, but he's got one single enormous Aven Redeemer out to keep Brock's army of Goblins and 1/1 creatures home. When Brock makes a skillful play with Embermage Goblin to destroy Scott's Willbender, Scott begins shuffling his cards more nervously than before. When Brock plays Rush of Knowledge and draws four cards, Scott concedes. "That was fortunate," the spectators mutter.

William ("Baby Huey") and Gerard are embroiled in a tempo race, but Huey's black/white deck looks slightly better than Gerard's Elves. However, Gerard plays out four creatures to Huey's two. Soon, his board is completely empty, and he sighs as he looks at the cards in his hand.

Huey Smothers one of Gerard's small creatures and then plays a Vile Deacon, but he's already at five from Gerard's speedy green offense. He plays a Twisted Abomination, tapping out to stave off dying for one more turn. Gerard Solar Blasts the Abomination, and Huey scoops his cards up. "I'm up a game, boys," Gerard tells his teammates.

Jon and Matt have started already, with Matt playing the first morph creature of the game. He takes the lead early, as his morph creature trades with Jon's Smokespew Invoker. 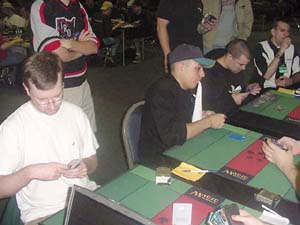 Matt attacks with Battering Craghorn and a morph creature, making Jon think hard about blocking. He trades with Matt's creatures, then plays a Putrid Raptor. Matt reads it, but remains unfazed.

Matt takes down Jon's Carrion Feeder and plays a Nantuko Husk as well, and Matt has only Krosan Tusker versus Jon's Putrid Raptor. Matt sends the Tusker in, then Jon sacrificed the Putrid Raptor to Deathmark Prelate to take down the Tusker. Jon's stuck cycling a Swat to try and find some answers to Matt's few, but large, creatures. He's at eight to Matt's twelve.

Carrion Feeder, sacrificed to Deathmark Prelate, kills Matt's Chartooth Cougar, and he's left with only a Krosan Vorine to Jon's formidable Prelate. John plays Smokespew Invoker and Graveborn Muse in short order, and things look grim for Matt at this point, as Jon is enjoying an avalanche of card advantage. Matt finally runs out of creatures and Jon swings in as Matt shakes his head. He can't do anything about it and picks up his cards.

Brock's first play of the second game is Aphetto Alchemist. He plays a morph creature, and when Scott plays a Callous Oppressor, Brock names "Wizard."

But Brock's the one shaking his head this time, as he plays another mountain. I don't think it's what he wanted to draw at all. Scott attacks for seven, bringing Brock down to nine with only two creatures (still the Aphetto Alchemist and a Master of the Veil) in play. Scott attacks again, taking Brock to two, then plays Mistform Shrieker to add insult to injury. Brock shakes Scott's hand as Scott receives a high-five from the enthusiastic Gerard.

Huey kills Gerard's Wellwisher right off with a Crown of Suspicion. Gerard is entirely unfazed, and plays a Timberwatch Elf right away to keep up the offense. When Huey plays Wing Shards to take out the Elf, Gerard says, "Huey's a master!" Though Gerard plays himself a Spitting Gourna to try and take the tempo of the game back, Huey enchants it with a Pacifism.

Huey keeps attacking with Glory Seeker, even though things look hopeless for him. Gerard plays more and more creatures, and Huey can't find anything at all. "Come on, team!" Gerard cheers as he packs up his cards, resplendent in victory.

Meanwhile, in a second game that doesn't really mean anything in this match (for Jon) at this point, Matt and John still have their game faces on. Jon's creatures (Withered Wretch and Carrion Feeder) are much smaller than Matt's Krosan Vorine, and when he attacks, Matt provokes Jon's morph creature into blocking.

Jon keeps playing as many creatures as possible, and though Matt's Chartooth Cougar attacks, he takes the damage valiantly. When Matt plays a Hundroog, Jon decides to give his Carrion Feeder fear with a Frightshroud Courier and swing back.

A Goblin Machinist blocks the Hundroog, when Matt attacks, and at Matt's end step, Jon Swats Matt's Stonewood Invoker. Jon only has nine life to play with, and is necessarily being as cautious as possible, but he's still only left with two blockers for Matt's four creatures (Hundroog, a morph creature, Chartooth Cougar, and Wirewood Elf). 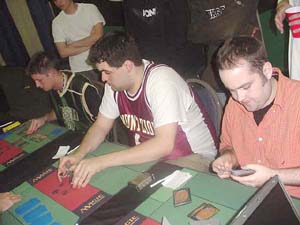 Jon attacks with the Carrion Feeder, but before blockers are declared, Matt Shocks the Frightshroud Invoker. Now he's actually faced with blocking decisions; he blocks with the Hundroog and the Elf, and Jon chooses to kill the Elf. He plays Reaping the Graves to bring back the dead Goblin Machinist, hoping that he'll be able to dig enough cards with high converted mana costs off the top of his library to stop the Hundroog.

Matt plays an Ancient Ooze and Jon shakes his head. "So Ooze is a..." "7/7" answers Matt. Jon nods and extends the hand.