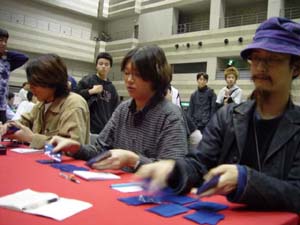 No YaburonOnce the public face of Japanese Pro Magic, Satoshi Nakamura has been on an extended hiatus from the game. His work for Wizards and commitment to his own business enterprises has kept him from competing at the highest level. Well, he's back, with a vengeance. He and his team, No Yaburon, are one win away from reaching the bubble where tiebreakers will determine who makes the coveted Day 2. Also vying are relative unknowns Spirit of C.C., composed of Kosuke Goto, Ichiro Shimura and Katsunori Nakamura.

At the far end of the table, Katsunori Nakamura was taking care of Suzuki nicely. Mesmeric Fiend kept him off Crackling Club while Cabal Torturer and Painbringer made his life miserable. Carrion Wurm, however, went unchecked, and when Waste Away brought back the Club to bust up the Painbringer, things were looking better.

Niwa managed to stop Shimura's inoffensive beatdown with Second Thoughts for a Lithatog, and Pilgrim of Virtue to deal wth Krosan Avenger. Luminous Guardian showed up to hold the ground and he took to the air with Treetop Sentinel. Shimura found Nantuko Disciple, but was way behind on the race.

Satoshi Nakamura's beatdown, on the other hand, was downright ugly. Two Cephalid Aristocrats and a Nantuko Calmer was all he could muster for quite some time. These were easily blunted by the likes of Militant Monk, Aven Flock, Pilgrim of Virtue and Psychatog from Goto. Nantuko Disciple helped make it a little more interesting. 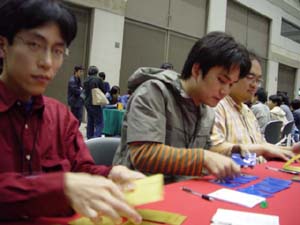 Spirit of C.C.If there's one thing that can take the edge off a land glut, it's Savage Firecat. Suzuki was swinging for seven and holding nothing of interest, while his Carrion Wurm looked on. Katsunori Nakamura spent his whole hand in a gang-block to take it down, but found himself unable to stop Carrion Wurm. Faceless Butcher provided an unneeded assist.

Shimura meanwhile still couldn't find enough creatures to press past Luminous Guardian, and Niwa had by this time acquired an Aven Windreader to speed up the beats. Shimura played coy, but had nothing to stop the air troops.

Goto's pair of Aven Flocks were swinging while he had the ground pretty much locked up. Unfortunately that meant he was trading four damage with Satoshi Nakamura's Skywing Aven and Nantuko Disciple. The race was unbearably close. On the final turn, Goto dug with Deep Analysis twice before finding Dematerialize for Satoshi's lone flying blocker, swinging for exactly lethal damage.

Goto and Satoshi were still engaged in mortal combat, but when they heard the news, they agreed to call it off.