Round 7: Steven Wolfman vs. Brian Kibler 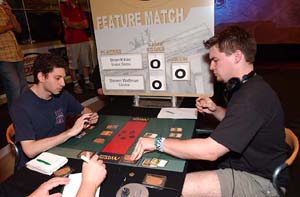 Brian Kibler and Steven Wolfman opened bombs. Kibler led off the draft with an Exalted Angel while Wolfman had a choice between Kamahl and Sparksmith out of the second pack. He chose to take the common and drafted a pretty reasonable blue-red deck around it and the Lightning Rift he took in the first pack. Kibler was playing black-white with few answers for the powerful goblin.

Kibler chose to be very aggressive and played a face-up Skinthinner on the second turn. Wolfman slowed him down with the dreaded turn two Sparksmith. Kibler groaned and got in for two with his zombie and played a morph hoping that another goblin wasn't lurking in the wings.

Wolfman was holding the Skirk Marauder and though about waiting a turn for it to unmorph but the threat of a face-down Angel was to great for him to take the chance. "How rare does that card look?" he mused as he stared at the mystery man. He ended up playing the goblin face up and shooting what turned out to be a Frontline Strategist.

Kibler continued to throw morphs down as Sparksmith fodder while getting in with a Skinthinner and third turn Deftblade Elite. He wore Wolfman down and it looked like he could get back in with a sixth turn Exalted Angel but it was bounced with an Echo Tracer.

Wolfman played a Chartooth Cougar and sent back the turn. When the Angel made its reappearance it was killed in a Torrent of Fire and Wolfman was able to get Kibler to one. "I thought I had you there," complained a puzzled Wolfman. Kibler laughed as he packed up his cards, "I don't think it matters."

"Did you have Angel on turn three?"

"No but I would have loved to have gotten my Deftblade Elite on turn one. My poor, poor Deftblade—he's just not getting the job done."

Kibler led off with a White Knight and began chanting, "No Sparksmith," as Wolfman took his second turn. On the next turn it was Wolfman's turn to worry when Kibler played a morph, "Angel?" 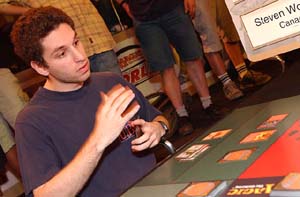 He played a Mistform Wall and sent it back bracing for the Angel but it wasn't coming and Kibler played another morph and a Barren Moor as his fourth land. Wolfman would have to worry again next turn. Wolfman played a Keeneye Aven.

Wolfman only blocked one morph with his Wall on the next turn and took two. Kibler played a Deftblade Elite and went to work with hit. Piety Charm killed the Keeneye Aven and a cycled Gempalm Avenger absorbed a Spark Spray and helped eat a morph.

Wolfman had nothing and scooped.

There was no goblin but a Scattershot finished off the face-down Skinthinner after taking one from the Smith. Kibler was undaunted and played a morph and a Deftblade—which Wolfman promptly killed. He played his own morph and Kibler answered with a Dragonstalker.

Wolfman was out of lands as well as goblins and he played another morph. Kibler played a Daru Spiritualist and a morph but Wolfman had a Disruptive Pitmage to spike the morph.

Wolfman got in for some damage with his face down guy and used a Spark Spray to kill a morph with the Smith—it was a Daru Sanctifier. A Blade Sliver came down on the Canadian side of the table. Kibler was pecking away in the air and Wolfman fell to nine on the next attack. The game was leaning in Kibler's favor when he played a Screeching Buzzard.

Wolfman went to work and played a face-up Marauder to shoot the Buzzard. He had to discard a card but held onto Frozen Solid for the 3/3 flier. Brian was holding the Angel but could not play it because of the Pitmage. He main phase cycled a Gempalm Avenger and found the land but it would have to wait until next turn. 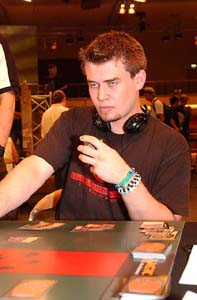 Wolfman sent in a Blade Sliver, Skirk Marauder and a Morph and took Brian from twelve to five. With the extra land Brian could safely pay for the Angel and he did so. When Wolfman attacked only with the Blade Sliver next turn, Kibler let out an audible sigh. He could not give up the Angel to the Sparksmith and 3/2 sliver but also chose not to chump block with his Spiritualist and fell to a precarious two.

An angelic attack took Wolfman to three and pulled Kibler up to six. He cycled a Barren Moor and found a Zombie Cutthroat that was played—obviously—face-up. Wolfman looked the board over and tried to figure out how to deal the final six points. He was holding Echo Tracer and couldn't see a way to finish off his opponent in one fell swoop. The Sparksmith could not kill the Spiritualist because of its ability and he was fixated on using the Sparksmith. If he treated it as a potential attacker he would have seen that he could have bounced a creature and attacked with everyone and Kibler could not fail to take to six regardless of his blocks.

Instead, Wolfman swung in with everyone but the Sparksmith and used it finish off the Cutthroat. He played his morph and passed the turn back to Kibler. When he bounced the Angel, Kibler could only shake his head. Despite the play error by his opponent there was no way out.

After the match, Jeff Cunningham came over and told Wolfman how he should have played it. "Yeah, I'm not so good...teach me how to play."

Kibler was still in shock. "When you didn't bounce my guy and kill me I thought you didn't have the Tracer. I thought I had you."