Round 7: Stuart Wright vs. Laurent Pagorek 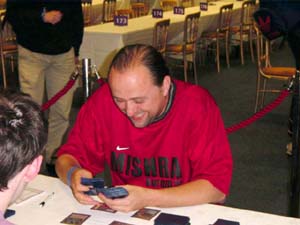 Stuart Wright is an up and coming player from the UK who has just qualified for his first Pro Tour. He is part of Team SecretTech who have recently taken a large proportion of this season's Invasion Block Constructed Pro Tour Qualifiers. Laurent has been to multiple Pro Tours and managed to place 6th at GP Lisbon 1999.

Both players are playing variations on Black, Red and Blue. The match started off fast and furious when Stuart made an early Shivan Zombie which was killed with a Fire but the first significant play was when Stuart cast Lobotomy on his opponent and took two of his Opts.

The next few turns were a battle of resources with both players attempting to play Fact or Fiction but only Stuart's actually resolved. Stuart swung the tide even more in his favor by playing back to back Phyrexian Ragers and the strain of the card advantage was beginning to show on Laurent.

The beats just kept on coming from Stuart's side of the table when two Pyre Zombies joined Stuarts assault. The game was practically sealed when Stuart played a Yawgmoth's Agenda with a busty Fact or Fiction fed graveyard - Laurent simply looked at this top card and scooped. This whole vicious affair was finished in just over five minutes.

Both players were silent while shuffling, both of them generating nervous energy. Laurent played first, playing Nightscape Familiar on turn three, with one blue mana open for Gainsay. On his next turn, Laurent played Lobotomy taking all of Stuart's Gainsays, but he had to contend with a Pyre Zombie that Stuart had made the turn earlier.

Stuart definitely seemed to be on the back foot this game as his threats were held off by the huge (4/5) Emblazoned Golem Laurent had just played and his regenerating Nightscape Familiar. Stuart's Pyre and Shivan Zombies simply weren't big enough and when they did try to gang block, Laurent had a Fire ready for one of them.

The speed of the game slowed down with both players taking more time to think as they entered the midgame. Laurent seemed to be in control as this time it was Stuart's Fact or Fictions, which did not resolve. However, he still had the Pyre Zombie to contend with as it was throwing itself in front of the Golem every turn and shooting Laurent for two.

The Golem finally got killed with a Malice and the Pyre Zombie just kept on coming back and was proving troublesome for Laurent. He was still doing his best to race as he was attacking each turn with his pair of Familiars and shortly later a third joined the fray. This got Stuart low enough on life that he had to start shooting a Familiar before damage was assigned so that he could take one less damage. Fortunately he drew into Phyrexian Rager which yielded another one and his defense was a then a bit more robust. This put Stuart down to 1 life though and when Start tried to play the Pyre Zombie again it was met with an Undermine. 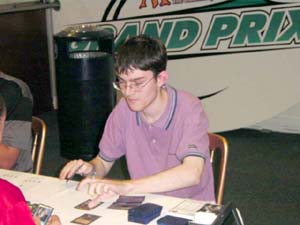 Stuart went first this game and tried to get an early footing with second turn Nightscape Familiar and third turn Phyrexian Rager. The Familiar met with Fire, but next turn Laurent was shaking his head while looking at his hand and decided that the best course of action was to Terminate the Rager.

At the end of Stuart's turn Laurent tried to Opt but this tied up his blue mana enabling Stuart to cast a Fact or Fiction in response which netted him a Phyrexian Rager and two basic lands.

This play left Stuart tapped out and provided Laurent the opportunity to cast Lobotomy giving Laurent the difficult choice of Phyrexian Rager, Spite/Malice, Nightscape Familiar, Yawgmoth's Agenda and Gainsay which led him to think about his choice for a long time, finally settling on the Gainsay.

Stuart got some threats onto the table and was reducing Laurent's life total by attacking with his Rager and newly played pair of Nightscape Apprentices. When Stuart's Blazing Specter resolved, Laurent's eyes bulged but it was an act as he had the Terminate for it and the Gainsay for Stuart's Spite.

Laurent seemed to continue with the answers as he had an Undermine for the Yawgmoth's Agenda though both players had only a couple of cards in hand and had to look for new threats and answers on the top of their decks.

Stuart looked to be first to find something as he pulled Fact or Fiction off the top which revealed 2 Lobotomy, Disrupt, Shivan Zombie and Shivan Reef. Stuart got the Lobotomy, land and Zombie and when he tried to Lobotomy Laurent's hand he only found land there as well.

Fortunately, Wright seemed to have almost magical ability at drawing Fact or Fiction off the top of his library, gaining him even more useful spells including a Pyre Zombie. He looked to be in control but then suddenly time was called, Laurent topdecked an Urza's Rage and with three Familiars on the table kicked the Rage for the game and match.