Round 7: Takamasa Fukata vs. Kentarou Yuasa 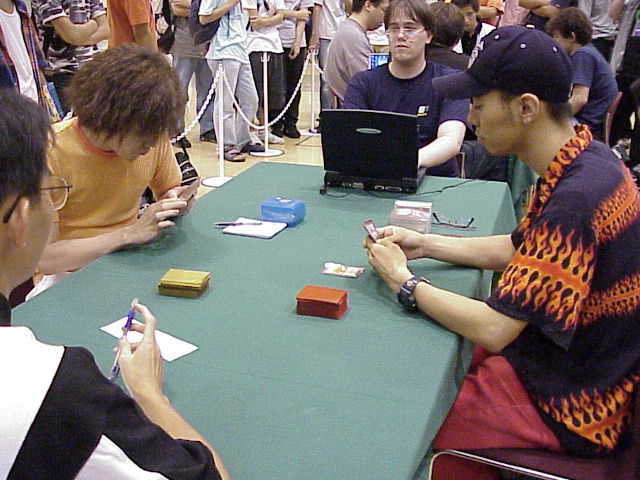 Kentarou Yuasa looked dangerous. With his carefully unkempt goatee, bright yellow and orange striped shirt, and a "take-no-guff" attitude, he was dead serious. Fukata Takamasa also looked dangerous, but that's because he was on fire, figuratively! Orange-red flames criss-crossed his purple shirt, and on top of that his pants were bright red! Perhaps it was poetic justice that the match revolved around each attempting to burn the other out.

Yuasa played the popular black-blue-red Counter-Burn deck, using Shivan Zombie and Nightscape Familiar to represent the creature section of "da hood", and relied on Undermine, Prophetic Bolt, Fact or Fiction, and Urza's Rage to off his opponents. Confronting this control archetype was Fukata's deck packing red, white, blue, and enough aggression to keep the professional wrestling business stocked for decades. Goblin Legionnaires, Meddling Mages, Lightning Angels, and Galina's Knight were charged with bringing the business to the other boy's boroughs.

Fukata's rock defeated the weak scissors of Yuasa, and he opted to play. No mulligans were made. The first threat of the game, Fukata's Goblin Legionnaires, earned a foul glare from Yuasa. Yuasa set the Legionnaires on Fire before Fukata could get peak efficiency out of the ill-fated troops, but a Meddling Mage naming Terminate took the Goblins' stead, and drew first blood.

An end of turn Fukata Prophetic Bolt parked itself at Yuasa's dome, netting Fukata an Angelic Shield. While Fukata's Lightning Angel's efforts to make it to the table were Undermined, Fukata's Meddling Mage (naming Undermine) did show up to oppose that ubiquitous speedbump of IBC, Nightscape Familiar. 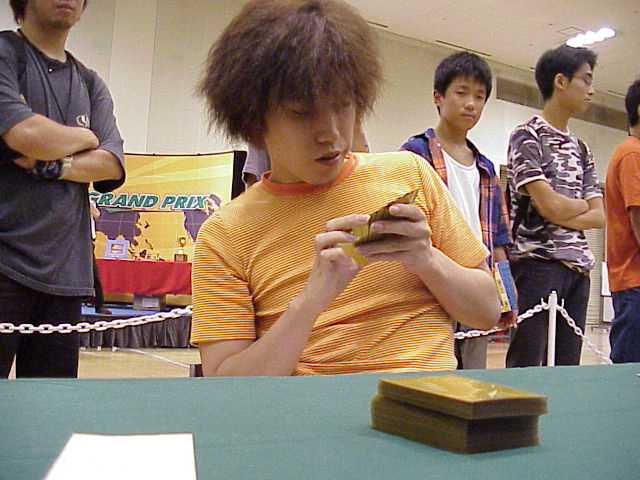 The Familiar was replaced by a Shivan Zombie, who grimaced as the Meddling Mage became that more bothersome through a second Angelic Shield. Yuasa just wouldn't let Fukata keep any men on the board, Excluding both Galina's Knight and another Lightning Angel in the same turn! Finally, a Galina's Knight showed up. Yuasa's hand of Urza's Rage, Fire/Ice, and Undermine had a problem threatening the safety of Fukata's creatures, but the Shivan Zombie kept hammering home. Yuasa's Void for 2 cleared the board, and he Fired Fukata to 12. With an Undermine and Rage in hand, there appeared to be little for Yuasa to worry about. A Lightning Angel attempted to turn the match around in the favor of Fukata, but an Urza's Rage with kicker bought Yuasa the win.

Opting to start in the second game, Fukata drew the dreaded one land hand and mulliganed, despite a proliferation of Meddling Mages and Goblin Legionnaires in hand. He dropped a Meddling Mage naming Shivan Zombie on turn 2 and was unhindered by Yuasa's Nightscape Familiar . Fukata' second Meddling Mage naming Exclude joined its brother. Fire cleared a Shivan Zombie out of the way of Fukata got nervous as his Mage naming Shivan Zombie was set on Fire, but a Goblin Legionnaire helped add to the beats, even though he hadn't drawn a third land yet! Fukata finally got an Island out on turn 7. Two Urza's Rages helped him slam through the sudden beats in five minutes. 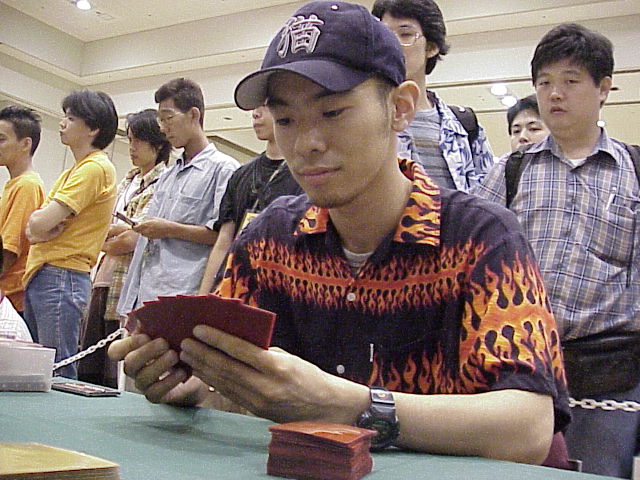 At first, neither player touched their sideboard for the third game. Both assumed that their alterations would do the job. Yuasa stuck by his decision but Fukata quickly frowned and made a rapid alteration in ten seconds. 20 minutes remained on the clock for the flares to fly. Yuasa started for the third time with an Urborg Volcano. A second Volcano gave Fukata a window to play Meddling mage briefly, naming Exclude again. Yuasa played his first blue source of the game, a Shivan Reef, but an Ice gave Fukata the freedom to play a Lightning Angel with confidence.

Void for 4 cleared away the flying terror that is considered patriotic by many countries. Yuasa then Voided again, this time naming 2 and snagging 2 sideboarded Jaded Responses and a Galina's Knight. A new Meddling Mage naming Prophetic Bolt allied itself to Fukata. Fukata had been damaging himself with repeated use of the Apocalypse painlands, and had brought himself to a perilous 12 life. Finally a Malice offed the pesky Meddling Mage, clearing the road for Yuasa's Shivan Zombie and Nightscape Familiar. Yuasa ventured and was unchallenged in playing a Prophetic Bolt, taking Fire/Ice over Exclude. Fukata's life loomed at a perilous 6. In desperation, Fukata used one of his carefully stockpiled Urza's Rages to keep the Shivan Zombie from putting him into Rage danger, but his life slipped to 5. Needing a decent blocker, Fukata failed to draw right, and Yuasa Fired and Prophetic Bolted his opponent out.