Round 7: Takayuki Nagaoka vs. Shinsuke Hayashi

Takayuki Nagaoka is used to wading through big events. At the monstrous Grand Prix – Kobe he surpassed a thousand players to wind up in the Top 4, losing to eventual champion Itaru Ishida. One of Japan's noted deckbuilders, it's no surprise he finds success in Block Constructed. This weekend he is playing the tried and true Slide. His opponent is the charming rug rat Shinsuke Hayashi. Don't let his youthful appearance sway you; Hayashi has game to spare. This weekend he's playing Goblin Bidding. 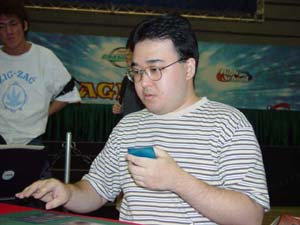 Hayashi started with a strong opener of Sledder and Piledriver. Unfortunately, his mana base got the better of him, and a Grand Coliseum slowed his third turn. Meanwhile, Nagaoka got out a Rift and took care of the Sledder using a Chartooth Cougar. Hayashi hit and added a Goon to the table. Nagaoka cycled to get rid of the Piledriver, and took his pain.

Astral Slide showed up to keep the Goon occupied, and now it looked like Nagaoka was in full control. Hayashi didn't have much in the way of action. Skirk Prospector definitely did not fit the bill. Akroma followed in short order, as did Hayashi's concession.

Hayashi's black splash wasn't online in Game 2, when he had no Smother for the Silver Knight that stopped his pair of Skirk Prospectors. He did manage a Goblin Sharpshooter, but looked disgruntled at this turn of events. Nagaoka played his third land and gave it back.

Hayashi went for the gusto, sacrificing both his Prospectors for Rorix Bladewing and a pair of pings. Sure enough, Nagaoka had the Wing Shards, and Hayashi was set back. Nagaoka made a Rift. Hayashi made a Goblin Warchief. Nagaoka was short on red mana, so he couldn't Starstorm the board. Instead, he Shocked the Warchief and played an Astral Slide. Hayashi brought out a second Sharpshooter. That got Nagaoka thinking. He could cycle his Starstorm to shoot one of them down, or he could gamble on drawing a mountain. In the end, prudence won, and he cycled to kill one of them. Assisting his decision were the pair of Exalted Angels in his hand just begging for a sixth mana. 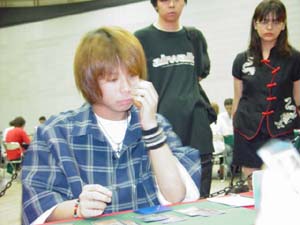 The cycled Starstorm served it up, and Hayashi failed to find land number five. Two Biddings mocked him from his hand. Nagaoka played one Angel, then a second. Finally, Hayashi pulled a land, and slammed down the Bidding. He got back two Sharpshooters, a Warchief and two Prospectors. He agonized over the math, but couldn't assassinate both Angels. He shot one down and gave it back, burning for two thanks to the sacrificed Prospectors.

Nagaoka picked up his Dragon and hit in the air for four more, giving it back with three mana open. Hayashi tapped four for Siege-Gang Commander. Here, Nagaoka blundered. He cycled Eternal Dragon, but chose to remove the Goblin Warchief and kill a Sharpshooter instead of targeting both Sharpshooters. This way, Hayashi was able to do just enough damage to the Angel to kill it. If it had lived, Nagaoka would have been able to cycle for the kill on his turn. Instead, he failed to draw a mountain for Starstorm, and needed some help.

Fortunately, that help came. When Hayashi dropped Rorix, he cycled his Starstorm to wave it out and damage Hayashi, and was given an Eternal Dragon, which also went to the face. Silver Knight finished it off.