Round 7: Time is Not on His Side

rvin Tormos burst onto the Pro Tour scene in 2005 with a Top 8 at Pro Tour-Los Angeles. Luis Scott-Vargas was a member of last year's U.S. Nationals team and is chasing repeat success at the end of this year's Day 1. He also managed to win the coin flip electing to play first, but Ervin enforced the "loser chooses table side" rule and made Luis get up to change seats with him.

"I wonder who the most famous MODO player is?" mused Tormos, annoyedly waiting for the round to get underway. 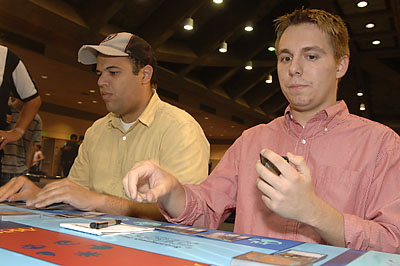 While waiting, both players had placed their initial hands faced down in front of them and Tormos even took a peek at the first four cards from his hand, a play usually looked down upon by pros who fear giving up information from their hand that might influence whether or not their opponent will mulligan. Whether Luis gained that advantage or not, he made the decision to go to six cards before coming out of the gates.

And come out of the gates he did, leading with Blade of the Sixth Pride into Saltfield Recluse while Ervin simply suspended a Veiling Oddity turn two, then played a Spiketail Drakeling turn three. The Drakeling countered Vargas' Centaur Omenreader while the Blade kept getting its beat on. Ervin had no creatures or plays, but was fortunate in that his opponent didn't either, and in no time the game had stalled with the life totals at 18-8 in favor of Vargas.

Tormos bashed into six untapped mana and Luis' 3/1 with his Veiling Oddity, which had finally entered play from suspend, then played Cryptic Annelid. Luis tried an end of turn Aven Mindcensor, but Ervin tried to trump with the +2/-1 option on Piracy Charm. A Fortify set to +0/+2 effectively countered, and when Luis added a Knight of Sursi to the board, Ervin packed it in to the blisteringly quick air force attack.

All told, the game had lasted less time than the players spent waiting at the table for it to begin.

Ervin Tormos spent a lot of time in the tank figuring out how to sideboard against his opponent's aggressive green-white deck. Finally, well after Vargas had presented, he finished shuffling and handed over his newly re-crafted deck.

On the play this time, Tormos led with Island after neither player took a mulligan and they each mimicked the previous game, Ervin by suspending a Veiling Oddity, Luis by playing a Blade of the Sixth Pride. His turn-three Yavimaya Dryad bumped him up to four mana, and it was even able to attack unimpeded due to Tormos' own Forest.

Ervin had no play for his fourth turn, but Luis had no play either, and the life totals stood 20-15, Vargas in the lead. A Primal Plasma hit play for Ervin as a 3/3, followed by the Veiling Oddity unsuspending, but Luis had added Herd Gnarr and threatened a potential "go big" on his turn. Tormos hardly seemed to care, attacking with both of his creatures, and when Vargas played a pre-combat creature then attacked, Tormos showed why: Scryb Ranger. The 1/1 allowed him to return his sole Forest to his hand to put his 3/3 in front of the now-blockable Yavimaya Dryad. Luis, however, had counter trump in Judge Unworthy, scrying only a single card to the bottom of his library before a revealed Knight of Sursi sent the 3/3 to the grave.

Post-combat the totals stood 15-9 Vargas and Ervin was again on the back foot. He replayed his bounced Forest, then played a proxy Centaur Omenreader. The actual Centaur had become marked and the judges had given him a replacement to use in his deck, something relatively rare but occasionally seen at high-level events. It didn't seem to scare Luis, who played the Knight of Sursi he had revealed to Judge Unworthy, making his Herd Gnarr a 4/4. He then turned all of his creatures sideways in the red zone, but hesitated on Yavimaya Dryad. Attacking with the 2/1 risked losing it to Scryb Ranger shenanigans again (Tormos still only had one Forest in play), but after considering options he added it to the fray. Ervin's back was definitely up against the wall. 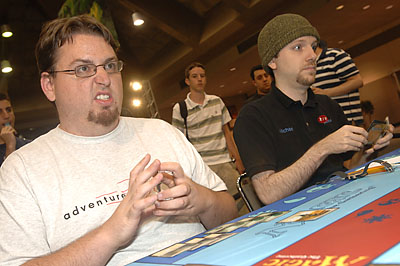 Luis Scott-Vargas has a fierce growl

"What do I do?" Tormos asked of his opponent, only half-jokingly. He went deep into concentration, reviewing his hand and trying to find a play that could start digging him out of the hole he was falling into. Time crept by, and judge Peter Jahn began eyeing the match, possibly in preparation of requiring Tormos to make a play. Eventually he decided on returning his Forest to untap his Scryb Ranger, then blocked only the Yavimaya Dryad with his Veiling Oddity. Unfazed, Luis revealed his Fortify, +2/+0ing his team and leaving Tormos at 1. He drew his card for the turn, went back into the tank, then finally attacked with his Centaur Omenreader, presumably in an effort to overload the board with reduced-cost creatures. Instead, he simply passed the turn.

Luis added yet another pre-combat creature to the board (Saltfield Recluse) to pump his Herd Gnarr, then turned all three creatures sideways. Tormos went back in the tank, and from the way the game was shaping up he was very fortunate it wasn't a Magic Online match as he would surely be timing out.

He finally made his play: Venser, Shaper Savant. Unfortunately he paid the full price of four mana for the legend, a potential problem as his Centaur Omenreader was tapped-meaning the Venser actually cost two generic mana less than usual and that Ervin would have mana floating in his combat phase if he didn't come up with an additional play. It was a moot point, as Luis had the Strength in Numbers to put it away, and Tormos extended the hand.

Tormos: "Uh, you're not going to put that play in there, are you?"