Round 7: Tom Guevin vs. Ben Ronaldson 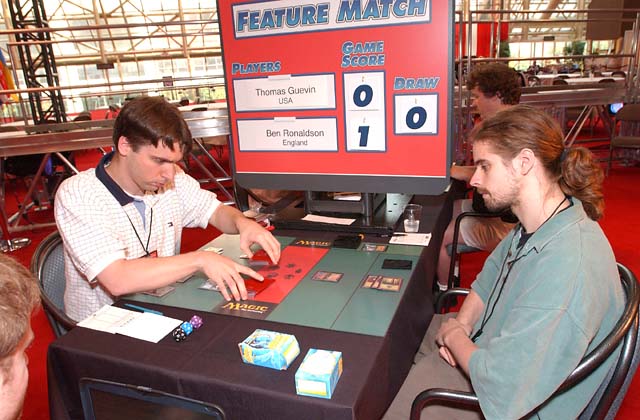 Tom Guevin is a player known more for his mouth than for his skills. Sometimes irritating, often controversial, but never dull, Guevin has talked his way into more warnings for unsportsmanlike conduct than perhaps any other player. Guevin is also a Pro Tour finalist, as he placed second at PT-Los Angeles years ago. Ben Ronaldson is a player whose stock has risen over the past few years. This former English National champion is well known for his deckbuilding skills, dedication to playtesting, and friendly nature. He is also one of the top lawn tennis players in the world, and makes a living teaching the game to others at Hampton Court Palace.

The first pack opened in the draft contained Faerie Squadron, Plague Spores, Kavu Climber, Stormscape Master, Halam Djinn, Zap and Sky Weaver. The Squadron was taken first, and Ronaldson second picked a Climber. Meanwhile, Guevin drafted a seventh-pick Phyrexian Battleflies over Fertile Ground, Zap, and Tidal Visionary. However, the Visionary came back to Tom, giving him a decent start to a black-blue deck. Ben opened the next pack, and made the interesting choice of taking Benalish Emissary first over Ancient Kavu, Duskwalker, Plague Spores and Rainbow Crow. Guevin happily took the Duskwalker sixth.

At this point, Ronaldson was in green-white, with the possibility of expanding his colors if mana fixers were available. This changed in the next pack when he took Simoon and Rogue Kavu, signaling that he might go into red. At one point, Spite-Malice, Exclude and Goham Djinn were all picked by the three players to Guevin's right. Tom, who had the fourth pick, had to settle for Defiling Tears. He obviously needed to go into a third color at this point, because he was being cut off. This started in the next pack, as Guevin picked up Glimmering Angel, and then proceeded to open a bomb in Teferi's Moat.

While this was going on, Ronaldson took Kavu Aggressor, along with Salt Marsh and Coastal Tower, suggesting that he might be looking to go five colors. This was confirmed when he took Ordered Migration, and then picked up two relatively early Primal Growths as Planeshift came along. An interesting point in the draft occurred when Ronaldson opened Flametongue Kavu. It seemed that he would take it, but Allied Strategies was picked instead. Ronaldson shipped the "FTK" to his fellow countryman and teammate John Ormerod, who gladly took it.

Two Rushing Rivers also found their way to Guevin, who seemed to have a good blue-black-white deck coming along. Once Apocalypse came around, he decided to switch strategies, and went into green. Savage Gorilla, Glade Gnarr, Penumbra Kavu and Ebony Treefolk were all picked up, and it seemed that Guevin had given up on white until he opened Death Grasp. He was more than happy to take the X spell, but it may have forced him to go back into white, which means that all the green cards he drafted would be for nothing. The most likely scenario is that Guevin will play blue-green-black, and splash white for Death Grasp.

Ronaldson picked up plenty of mana fixers, but didn't seem to get the ridiculous bombs associated with the Five-Color Green strategy. His deck isn't very impressive, but if the packs had gone his way a little more, and if he didn't feel obligated to help out his teammate, things may have turned out better. It seemed as if Ronaldson gave up on the idea of drafting a good deck when it became apparent that things weren't working out, so he made sure Ormerod got a good deck.

In order to win, Guevin will need to use his evasive creatures to get through Ronaldson's army, which is mostly ground oriented. Coastal Drake will also be huge for Guevin, since Ronaldson has a ton of Kavu in his deck. If Ronaldson can get a decent mana draw and enough mana fixers, his Ordered Migration and Allied Strategies will be nothing short of game shifting. 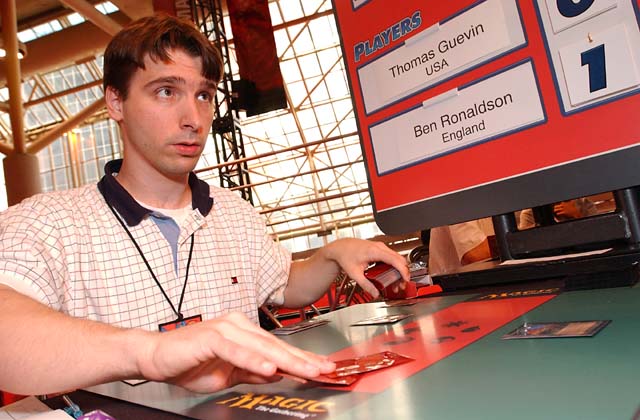 Tom Guevin Guevin won the roll, and chose to go first. He mulliganed his opening hand, and kept the next six cards. Ronaldson played a second turn Thornscape Familiar, and Guevin found himself stuck at two lands. Even though Guevin was having mana problems, Ronaldson was fine in that department, as he used Primal Growth to get a mountain. Guevin drew, and was still stuck at two lands. He played Duskwalker without kicker, which could hold off the Familiar. Ronaldson got to five lands, and Guevin joked, "Frenzied Tilling?" Kavu Climber was summoned, and Guevin missed another land drop. Ronaldson, obviously not confident in his deck, mentioned "This is the only way I was going to beat you."

Kavu Howler was cast, and never at a loss for words, Guevin said "What a great play!" Benalish Emissary showed up as one of the four cards revealed, and Guevin joked "It must hurt to lose your first pick." Ordered Migration was played for four on Ronaldson's next turn, but the game was over even before that. Guevin finally drew a third land, but it was too late.

While shuffling, Mark Rosewater asked who won, and Ronaldson said that he had, due to Guevin's mana screw. Guevin added, "But if we had been playing tennis, I would have crushed you!" 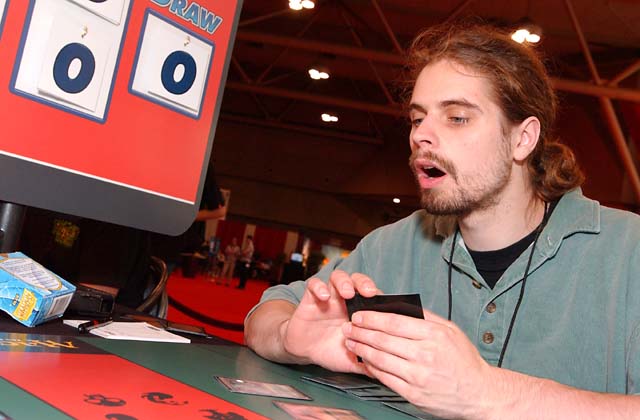 Ben Ronaldson This time, Guevin didn't mulligan, and opened with Phyrexian Battleflies. Ronaldson accelerated his mana with Urborg Elf, but Guevin killed it off right away with Defiling Tears. Penumbra Bobcat showed up on Ronaldson's side of the table, while Guevin summoned Whirlpool Rider. The Bobcat served for two, and Guevin attacked back for three with his creatures. Ronaldson summoned Kavu Climber, but Guevin responded with "I'll take a leak on that," and played Evasive Action. He then untapped, and played Duskwalker with kicker.

Primal Growth was now played with kicker by Ronaldson, who sacrificed the Bobcat. A 2/1 Bobcat token came out, and was joined by Stone Kavu. Duskwalker got through for damage without a problem, and Ebony Treefolk was added to Guevin's army. Guevin had been eating some food during the match, and was told to put it away. "It's all about pushing the floor rules to their limit. Unsportsmanlike conduct, eating food . . . me and Mike Long have defined these floor rules."

Ronaldson attacked with the Stone Kavu, and then summoned Sparkcaster. Guevin had been attacking for five each turn with the Battleflies and Duskwalker, and Ronaldson's deck didn't really have many answers for the situation. Ronaldson played Kavu Aggressor with kicker, and Guevin mentioned the now infamous incident when Ronaldson walked away from an opponent who called him on not declaring kicker. Guevin joked, "I should have called over a judge right now . . . you would have scooped! I would have done that if I wasn't going to win this match anyway." Ronaldson agreed, adding, "You probably will win this match."

Sparkcaster attacked and was blocked by Guevin's Ebony Treefolk, but Gerrard's Command saved Ronaldson's creature. Meanwhile, the Battleflies and Duskwalker attacked once again, bringing Ronaldson down to two life points. Facing imminent defeat, Ronaldson attacked with all his creatures, except for the 2/1 Bobcat token, which was black and could block the Duskwalker. Ronaldson still needed a way to block the Battleflies, and played Ordered Migration, producing five tokens. Guevin conceded, and Ronaldson apologized for making "Such a terrible topdeck."