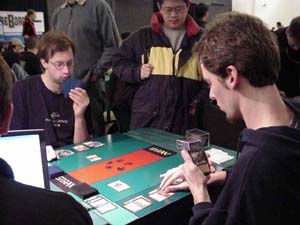 Van de Logt commented that he knew Snepvangers had some good cards but the mana was a little "sketchy". This didn't seem to matter as Snepvangers dropped swamp, forest and plains in quick succession.

Van de Logt was missing white mana but a Concentrate soon dug him out while the only pressure Snepvangers could apply was a Krosan Archer. An end of turn Teroh's Vanguard from van de Logt was followed by a Possessed Aven, one of the bomb rares the Dutchman had in his deck.

Snepvangers got rid of the Aven with a Waste Away only for van de Logt to dig it back out of the graveyard with a Morgue Theft. Snepvangers had a Grotesque Hybrid to face it down as van de Logt used Breakthrough to draw a lot of cards and gain threshold.

Van de Logt sent the Possessed Aven into the Grotesque Hybrid, Snepvangers saved his creature with Embolden but van de Logt chose to let the Aven die rather than save it with a Pilgrim of Virtue. 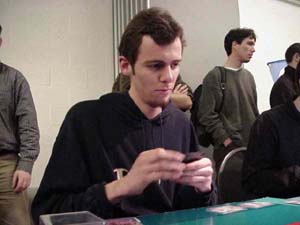 Tom van de Logt It didn't look to matter as Snepvangers still hadn't cast anything else. Van de Logt summoned a couple of fliers and then cleared the Hybrid out of the way with a Patriarch's Desire.

Snepvangers finally found his third monster: a Werebear that was currently 1/1, but with six cards in graveyard and a Timberland Ruins in play could get a lot bigger at any time.

Not bigger than van de Logt's other bomb rare, Wayward Angel, especially as he had threshold. Snepvangers tried to wipe out the rest of van de Logt's forces so the Angel would die by pitching most of his hand to Sickening Dreams. Van de Logt had a Rites of Refusal and pitched his hand to ensure game 1..

Snepvangers made van de Logt go first and was rewarded with a mulligan from his opponent. He went to take full advantage with a turn 1 Basking Rootwalla and followed it with a Crypt Creeper.

Van de Logt also had early plays: Mystic Visionary, Mystic Familiar and then an Escape Artist. All smaller than the lizard.

Van de Logt tried to repair some of the damage from mulliganing with a Breakthrough and then recovered some of the damage to his life with a Teroh's Faithful. A Psionic Gift on a Mystic Familiar soon pinged the annoying lizard into the graveyard.

The board state and life totals were fairly even at this point. Snepvangers had an Aven Flock and Skyshooter while Van de Logt had the Artist and Faithful. It didn't stay even for long as the Flock vanished to Second Thoughts and a Stern Judge entered play. It cost Snepvangers 3 life to remove it with a Crippling Fatigue from the graveyard.

Snepvangers was down to seven and being nibbled for one a turn by the Escape Artist. He removed the Faithful with a Waste Away and started to race with a Werebear and Skyshooter. One a turn to two a turn is not a quick race but van de Logt was only on thirteen and threshold was approaching for the bear. 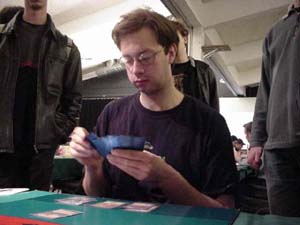 Bram Snepvangers A Scout speeded up things for van de Logt and he was able to start sacrificing land to try and make the game certain.

Waste Aways flew in from both sides and it was back to one a turn with the Artist vs. Skyshooter.

Van de Logt looked to Concentrate to provide that last bit of gas and dropped the Wayward Angel to block Snepvangers's Wererat for a turn with Snepvangers on one life.

Van de Logt looked to be coming over the line first when the lowly Artist came in again on the next turn. Snepvangers had the Embolden and cast it to trip him up at the last step.

But wait! Van de Logt had a Liquefy in hand to counter it and the match was suddenly over for a stunned Snepvangers.