Round 7: Tomoya Tsushima vs. Alex Borteh 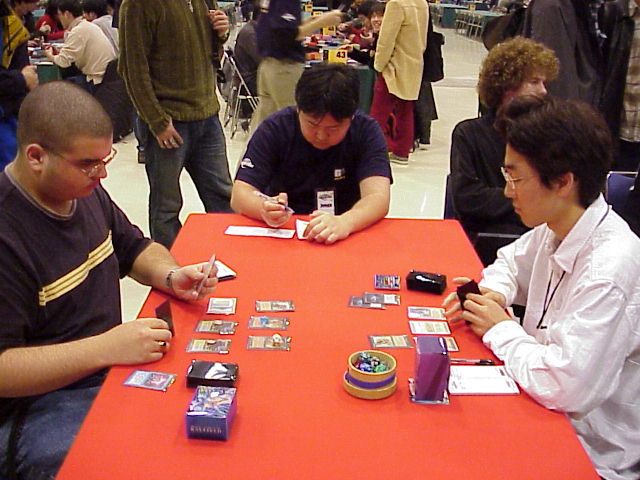 Underdog Tomoya Tsushima has gone 6-0 without the benefit of byes, using his home-grown version of three-deuce. His opponent, happy-go-lucky Worlds Finalist Alex Borteh is with the Aluren combo deck "Raisin Bran". It's a battle of pluck versus experience.

Tsushima led with Druid Lyrist. Borteh answered with Wall of Roots. doubled up on Cursed Scroll, while Borteh continued to play Invitationalist with a second Wall of Roots, and Wall of Blossoms.

Borteh Land Granted, revealing Aluren, Force of Will, Man-o-war and Whirlpool Rider. Tsushima had to sit on his awkward draw. The Man-o-War bounced the Druid Lyrist, giving Borteh the chance for a big turn. Tsushima replayed the Lyrist, and Borteh went for it. He played Aluren and Whirlpooled. He frowned at his new hand, and passed it back to Tsushima.

Now Tsushima was on the offensive with his Cursed Scroll. Borteh found another Aluren, but still had nothing to get going. Rancor on River Boa plus active scroll and two Incinerates in hand left Borteh with very little time.

Tsushima played out Druid Lyrist, seemingly the nail in the coffin. However, Borteh played Man-o-war, and Tsushima let him bounce his Whirlpool Rider. His new hand was gas. 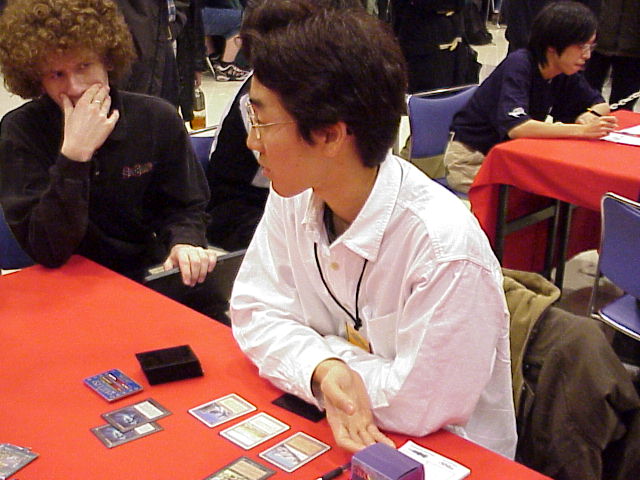 Then Borteh played Cavern Harpy as an instant, and responded with the Rider. Tsushima let Borteh draw five new cards, but burnt both the Rider and the Man-o-war before the Harpy resolved. Unable to cycle through to new cards, Borteh passed it back. Tsushima Incinerated him, attacked, and then won with Cursed Scroll.

Tsushima kept a hand of two Swords to Plowshares, two Plateaus, Mogg Fanatic and green cards for Game 2. He Plowed Borteh's Wall of Blossoms, and found Land Grant to get his green on. He added River Boa to his team just in time for Borteh to Massacre them away.

Still, he hand was brutal. He had Seal of Cleansing and Skyshroud Elite to keep things moving. Borteh forced the Seal with an Aluren. Down came Rancor. Borteh took the beats, and Forced the second seal.

Two swings later, Borteh was in trouble. Land Grant had shown that he held only Aluren and Force of Will. Rancor pulled out the Force, and the subsequent attack left Borteh at one. Borteh needed a big pull here.

He tapped four for Aluren. Did he have the berries? Raven Familiar! The crowd goggled. It served him the goods, offering a choice of Harpy, Feeder or Wall of Roots. Borteh took the Feeder and passed it back. Tsushima drew Rancor, powered up and sent. Borteh double-blocked. Tsushima assigned damage two on both creatures and Borteh, allowing Borteh to save his Familiar by moving a spike counter. How big an error would it be? 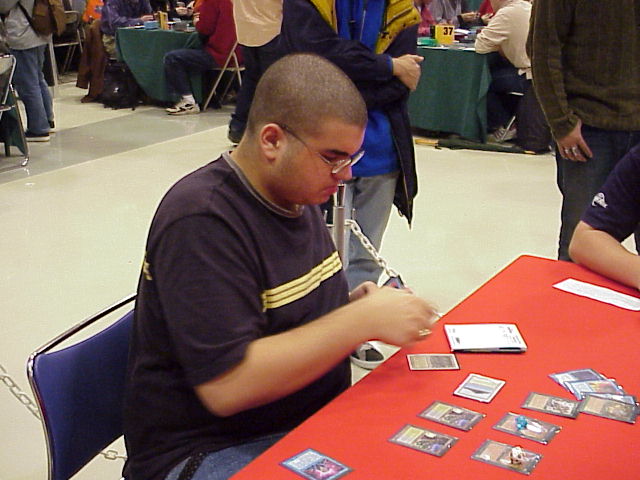 Borteh was a ball of fury. He echoed his Familiar, and plucked Cavern Harpy like it weren't no thang. The reused Familiar got him a second Harpy, but the third pass turned up no goods. Still, he had a five-power airforce against Tsushima's empty board.

Tsushima drew Wasteland and ate five damage, then found Swords to Plowshares. He gave it back to Borteh. Borteh swung, and Tsushima plowed the Familiar. His next draw was River Boa. Borteh brought back a Harpy and Massacred. Tsushima drew Mogg Fanatic to take the match.

4 Call of the Herd 4 Land Grant

4 Force of Will 4 Brainstorm 1 Vampiric Tutor