Round 7: Tsuyoshi Doyama vs. Katsuhiro Mori 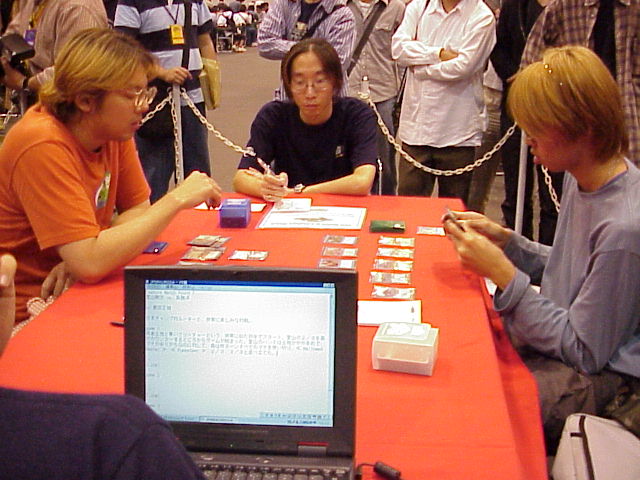 This round is a textbook example of what a feature match should look like. On one hand is Tsuyoshi Doyama, former Japanese National Champion, and on the other, Rookie of the Year Katsuhiro Mori. They've done their reputations justice today. Both are sitting pretty at 6-0, jockeying for position at the top of the standings.

Mori kicked things off with a Diligent Farmhand that hit once then smoothed his mana. Doyama was silent until he tried a fourth-turn Aven Smokeweaver, but Mori had Syncopate at the ready. Mori continued his defensive posture with Hallowed Healer.

Doyama's hand was all land and reactive cards, particularly the powerful Cultural Exchange. He forced Mori to play out better threats with Angelic Wall. Mori Obliged with Treetop Sentinel and Puppeteer. While Doyama continued to flounder with an uncooperative draw, Mori was hitting his stride, playing Aven Windreader.

Doyama drew Scrivner. This let him squander Repel on the Puppeteer to buy time and regrow it. Next, the Exchange got him Puppeteer and Windreader for his two meager creatures. Mori got through for four with his newfound Gray Ogre and Sentinel, but things took a turn for the worse when Doyama untapped and added a second Windreader to his squad.

Now Mori was on the defensive. Werebear was not amazing. Doyama began locking the Healer with Puppeteer and hitting for three. He made sure the beats continued by Syncopating Second Thoughts. Thaumatog came down for Mori, forcing Doyama to hang back.

Mori decided enough was enough. He sent his whole team. Doyama used his Puppeteer to untap a Windreader, but unfortunately, it was Mori's. This let Mori Repel it to his library before it could any damage. Thaumatog ate a bunch of lands to take down the creatures blocking it. Now Mori was at threshold, drawing a 3/3 flier. 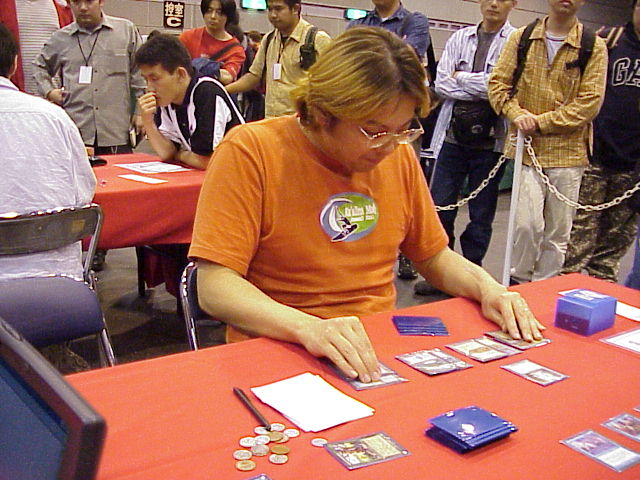 With the Puppeteer back online, Mori could only swing for two a turn. However, Doyama's back was against the wall. He made Krosan Archer to further stem the tide. It was then that Mori made an error, using Diligent Farmhand to search out a land, despite the fact that he knew his opponent held Repel. The Healer went back into Mori's library, making things much easier on Doyama.

The armies continued to grow over the next five turns. Eventually, Concentrate got Doyama Leaf Dancer. Mori was forced to throw away his forests to knock it down.

Things got decidedly complex. Mori had Hallowed Healer, two Nantuko Disciples, plenty of fliers, Thaumatog and a few ground fatties. Doyama had Puppeteer, Nomad Decoy, Nantuko Disciple and creatures to match. Despite Doyama misplaying the Puppeteer, only tapping three creatures instead of four, Mori could not safely Alpha Strike for the win. If Doyama had any trick, he would be undone. 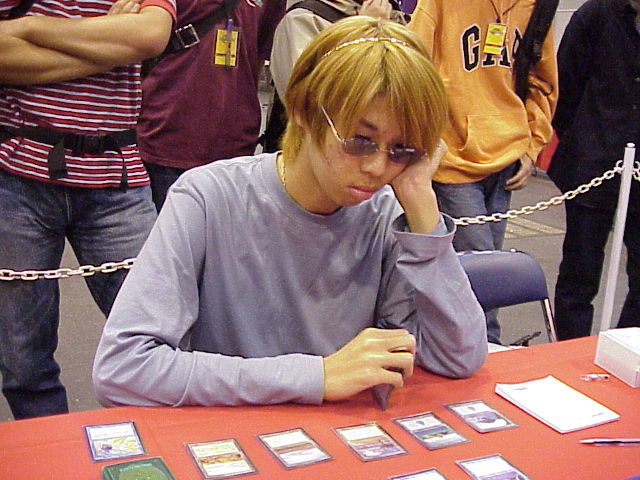 He tested the waters with an aerial assault, and found out that Doyama had Embolden. That was bad. Doyama struck back, leaving enough defense to survive the turn, then locked down all of Mori's fliers and attacked for the win.

Ten minutes remained for game two. Mori blazed out of the gates with Diligent Farmhand and Wild Mongrel. Aether Burst from Doyama slowed his pace. The Mongrel came back, and Doyama's only defence was Werebear. Hallowed Healer came down to help Mori.

Doyama tried to come back with Second Thoughts, but was Syncopated. Mori's beatdown was mercifully sluggish. Scrivner brought back Aether Burst, while Doyama fell to nine. His defenses solidified behind Thought Devourer. Mori tried to break through, but both player had Repel, and so the state remained the same.

Soon after, Doyama had Nomad Decoy and threshold working for him. Mori could no longer damage him, and time ran out.