Round 7: An Undefeated Day on the Line: Gerard Fabiano vs. Mike Patnik

atop the field at a perfect 18 points is Mike Patnik. Rewarded with a 3-0 performance from his White Weenie deck, Mike went into Round 7 in first place. A graduate of Pitt (the University of Pittsburgh, aka an institution attended by Magic's grand poobah, Randy Buehler - though he is technically still on sabbatical), Patnik is currently a graduate student in electrical engineering at CMU. He had no satisfactory answer when asked why he had yet to be recruited into Wizards' R&D. 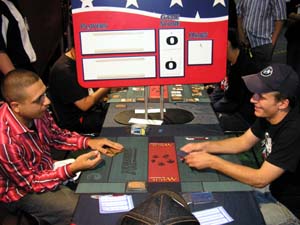 Gerard Fabiano, left, and Mike Patnik sat near the top of Friday's standings.

Across the table sat Gerard Fabiano. At 5-1, Gerard - one of the Seven Kings - was paired against Mike due to the oddity of four-round booster draft pods… somebody had to get paired up (and down).

While shuffling, Gerard confronted Mike about his Final Judgment. "I can't believe you got fourth-pick Final Judgment," he began…but Mike interrupted him.

Howling Mine vs. Limited Resources

Mike won the roll but his initiative was met with a trip to Paris. Deciding his six-card hand was good enough to keep, Mike led with a Swamp and passed.

Mike's third land was a Swamp. He Duressed Gerard… and saw quite a powerful hand: Elder Pine of Jukai, Petalmane Baku, Roar of Jukai, Unchecked Growth, Forest, Okina, Temple to the Grandfathers

Not surprisingly, Mike took the Elder Pine of Jukai.

Gerard's third-turn play was the Forest alone; surprisingly, he passed without playing the Petalmane Baku. Mike was stuck on three lands and passed into Gerard, who simply played another Forest, signaling what he had drawn (Mike had seen his Okina already, remember). Finally on his fifth turn, the CMU grad student tapped his Plains and two Swamps for a Kitsune Blademaster. Gerard just ran another Forest on turn six.

Turn seven saw the first attack of this Defender vs. Cleric battle. Mike came in with both of his creatures without playing a land. Kitsune Blademaster, so often the bane of at least-aggressive green decks, was blocked by the enormous Traproot Kami while the Split-Tail Miko, unused to the Red Zone, hit for one damage.

On Gerard's sixth turn, he revealed his insidious plan. Down came a Swamp, his sixth land; down came Haru-Onna. The descendant of Striped Bear replaced itself in Gerard's hand. Immediately afterward, the world's most lethargic Petalmane Baku finally made an appearance, bouncing the Haru-Onna back to Gerard's grip, readying her for next turn. 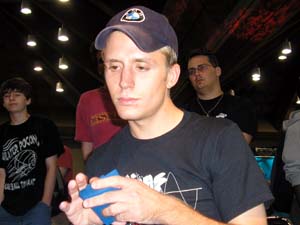 Facing off against a board of Traproot Kami and Petalmane Baku, Mike elected not to attack. He missed yet another land drop.

On Gerard's seventh turn, the Okina finally made its appearance. This time Haru-Onna was followed by a second Elder Pine of Jukai. Still stuck on three lands come turn eight, Mike looked to be almost impossibly behind. Conversely, Gerard played his eighth land in eight turns, then Haru-Onna triggered Elder Pine of Jukai…which whiffed on picking up any lands. Luckily Gerard had another four-mana Spirit, a Lifespinner, which picked Haru-Onna back up and netted Fabiano an additional Forest.

The ninth turn finally gave Mike a second Plains; he played Descendant of Kiyomaro, but almost despondently asked, "You've got more cards than I do, right?"

Gerard Alpha-struck on his ninth turn. In came Petalmane Baku. In came Lifespinner. In came Elder Pine and Haru-Onna. Mike carefully considered his block, coyly placed creatures in front of the various attackers. Ultimately, though, remembering Roar of Jukai in his opponent's hand, Patnik had to take it. After the attack, Gerard played a Gnarled Mass and re-played his Haru-Onna, netting a pair of Swamps.

Patnik had only a Kami of Empty Graves on his tenth turn.

Gerard met this with yet another Alpha strike. This time Patnik could not afford to take all the big hitters and put his Descendant in front of Petalmane Baku, Empty Graves in front of Elder Pine, and the Blademaster in front of Haru-Onna.

Gerard's Roar of Jukai revealed a third Elder Pine of Jukai via the Elder Pine; the Seven Kings member thought about bouncing his Haru-Onna, but decided instead to just pump it again with his Unchecked Growth, planning to roll over the usually dominating Kitsune Blademaster.

Gracefully Patnik conceded. "I just wanted to see more of your deck."

Though Patnik chose to kick off, the first play of the game was Gerard's second-turn Dripping-Tongue Zubera. Mike had a Split-Tail Miko on turn three, but the usually effective defensive creature could not prevent a hit for one the next turn. Gerard's third turn play, though, demanded attention: Thief of Hope! 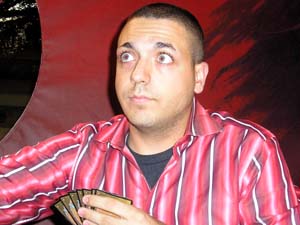 Mike Passed the fourth turn, but Gerard had Gibbering Kami on his fourth, triggering the Thief of Hope for the first time. After Miko mitigated a little damage, Mike met his fifth turn with 17 life to Fabiano's 21. He once again played land and passed.

Gerard took what would be a big turn, Ornate Kanzashi and an Alpha strike to put Mike on 14. When Mike started tapping mana on turn six, Gerard started picking up his creatures to remove them from game, but Patnik stopped him.

"Sure would like a second Plains," he said, merely deploying a Gibbering Kami of his own.

Gerard tried the Ornate Kanzashi, asking for land, but turned over Iname, Death Aspect without sufficient mana to play it. Gerard played Traproot Kami to put his opponent at a 22-13 disadvantage, and laid a land.

Mike ran his Gibbering Kami into Traproot Kami, effectively telling his opponent that he was about to play the Final Judgment. Sure enough, the Judgment came next, sweeping the board completely.

But with Mike tapped out, Gerard's Ornate Kanzashi started working. Up first was Kami of Waning Moon off the top of Patnik's deck. Fabiano greedily played it and followed up with Ashen-Skin Zubera.

Gerard unsuccessfully flipped Hundred-Talon Strike off the top of Patnik's deck. He came over the top with his flying, borrowed, Kami for one, putting Mike to 12. "Okiba-Gang?" Gerard shook his head and played a Lifespinner.

Patnik came across the Red Zone, milking his slight advantage on the board. Ashen-Skin Zubera stole a Plains from him by jumping in front of Torii Watchward. Mike followed up with his Descendant of Kiyomaro - this time he did have more cards.

Ornate Kanzashi betrayed Gerard once again, flipping Kitsune Blademaster, another uncastable white spell. At least Patnik wasn't going to get it. This time when he came in with Kami of the Waning Moon, though, Gerard did show his opponent Okiba-Gang Shinobi. Irony of ironies, the Okiba-Gang cleared its ninjutsu-enabling Kami once the Waning Moon returned to Patnik's hand.

Gerard's Ornate Kanzashi turned over a big Plains the next turn. This card was pure power. Gerard looked down at the various white cards removed by the Kanzashi earlier in the game. He finished off with Scaled Hulk, once again in control of the game.

The next few turns were a flurry of attacks and blocks but were ultimately ineffectual from Patnik's side. Once Gerard had the Plains, everything that the Kanzashi flipped was pure card advantage. Hundred-Talon Kami was the first big Spirit to desert its master, but Patnik finally scooped when Gerard turned over his Eradicate a turn or two later.

"My deck is so bad," said Patnik. "At one point, I took five Kami of Empty Graves in a row."

Only two of them made Mike's main though. Good deck or bad, he did very well on Day One, with only a single loss; Fabiano and Patnik may meet again at an insanely competitive 6-1 table Saturday.