Ruel brothers are approaching legendary status with the impressive results they put up tournament after tournament. In fact, it almost seems like they take turns slicing through fields with careful precision. On Wednesday, Antoine managed to win all six matches, and he's looking to continue that streak here. 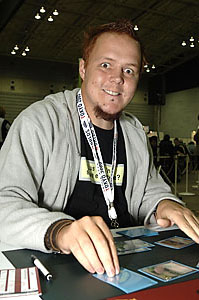 Werner Cloete was one of four undefeateds on Day One.

His opponent, Werner Cloete, is a member of the South African team found itself sitting in third place in the teams competition after Day One.

As they shuffled, they talked about how the draft had gone. Cloete seemed unhappy with the results, saying, "The first pack was good…but the second pack I got completely knackered. I thought I would get a lot more, because I was completely cutting off my colors. But nothing…"

Antoine grinned, evidently pretty happy with his own deck. "How does it feel to be 6-0?"

"Good…but it'd feel better to be 7-0. Still a very long way to go before you can celebrate, you know?"

"I like the feature match area though," Cloete continued.

"Yeah, me too, although the Japanese players said it wasn't very Japanese." Antoine paused and looked around. "Looks pretty Japanese to me, though."

He had to chuckle. "Not that bad."

(Rows in blue are Antoine's turns.)

Despite an early Selesnya Evangel from Cloete, Antoine got in for a quick 10 damage in the early game and then forced through another six with Flame-kin Zealot. While Cloete had stabilized the red zone with a Divebomber Griffin, his life was still in danger due to a fresh Viashino Fangtail. His Grave-shell Scarab couldn't attack due to a Thundersong Trumpeter, and he was making tokens too slowly to put any pressure on the French player. Eventually he succumbed to the Fangtail plus a duo of evasion creatures.

"Splash! Splash! You can do it!" chanted Cloete, hoping against hope that Ruel would morph his deck into something less consistent. Antoine smiled but wasn't falling for it. 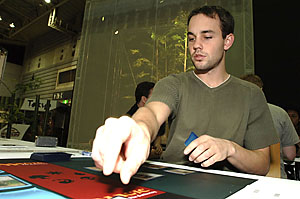 Antoine is undefeated in his last 14 rounds on the Pro Tour.

Antoine was content to sit back, build up a ground force, and peck away with a Skyknight Legionnaire for the first few turns of the game. Cloete, on the other hand, stumbled on lands for a turn but had an early Fists of Ironwood (on Ruel's Viashino Slasher) and then a Nightguard Patrol that was able to hold down the fort. However, on turn seven, he tapped out to convoke out a Guardian of Vitu-Ghazi, and Ruel then attacked with everything. He nudged the Guardian in front of Boros Swiftblade, but Antoine targeted it with Rally the Righteous.

Cloete paused as reality sunk in. "Am I dead?"