Round 7: Who is the Feature Match?

he background for the feature match in Round 7 didn't have the usual trappings of the arena. Undefeated at 6-0 was apparently the last place Matt Ferrando and Guillaume Matignon thought they'd find themselves on Day 1, so when the two of them were called repeatedly for their feature match the calls fell upon deaf ears. By the time they were located, their match had already begun but we were able to jump into the game just as the action started.

Guillaume's board of Ondu Giant and Sporecap Spider was staring down Matt's Kozilek's Predator and its Spawn, both players on 20. Matt added Wildheart Invoker to the board and was one land short of being able to activate it on the following turn. Guillaume needed to deal with it or Matt's Spawn token would become a legitimate threat. He cast Prophetic Prism followed by a second Prism, and one of the two cards drawn was Heat Ray; down went the Invoker. Matt's only reply was to draw and pass the turn. Guillaume, on the other hand, didn't let up. Eight lands were tapped and Eldrazi Conscription hit the battlefield enchanting Sporecap Spider. The Spider attacked with its newly found unearthly strength, annihilating two of Matt's Forests in its path, and after some thought Matt decided to take the 11, sending him down to 9.

Things looked bleak, and Matt needed help from the top of his deck. I didn't see what he drew, but it wasn't good enough to deal with an 11/13 trampling monstrosity, so he conceded. 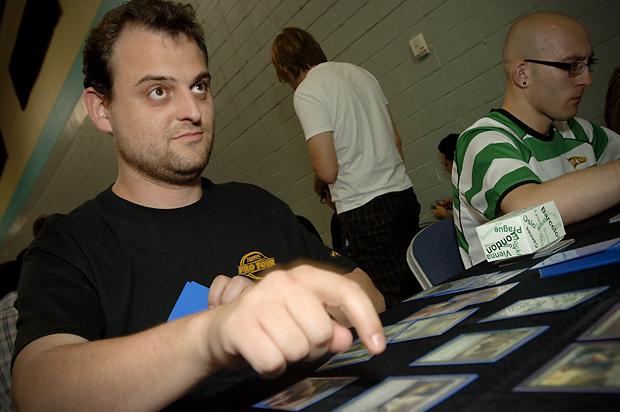 The players picked up their things so we could finish the match in the Arena. Both were apologetic about not realizing they were a feature match, and I let them know that it really wasn't a problem.

"It's probably only the second time I've gotten a feature match in a PT," Guillaume added. It wouldn't be his last if he kept up the pace he was playing at, but he still had Matt Ferrando to face who was also determined to move to 7-0.

"I'll draw," Matt said, opting for the extra card over the seemingly irrelevant speed advantage in the matchup. Guillaume was content with his seven while Matt could only sigh as he mulliganed to his final hand of six. Creatures entered the battlefield on turn two with Guillaume's Nest Invader versus Matt's Bramblesnap. Guillaume attacked Matt down to 18 prior to adding both Prophetic Prism and Enclave Cryptologist to his side of the battlefield. Matt answered with a pre-combat Zulaport Enforcer, and Bramblesnap attacked Guillaume down to 18 thanks to a little help from said Enforcer.

Guillaume, on his next turn, used four mana to bump up the Cryptologist to level one and to Heat Ray Matt's Bramblesnap. Matt was taken down to 16 by Nest Invader. Now it was Matt's turn to mount an offense. Boar Umbra on Zulaport Enforcer allowed him to attack Guillaume down to 15 as well as level it to level one after untapping all his land from the aura. Guillaume, unfazed, struck back with Nest Invader bringing Matt to 14 then cast Rapacious One; Matt didn't like where the race was going.

He considered his options and decided the Enforcer would best serve him on defense. At the end of Matt's turn, Guillaume looted with his Cryptologist, discarding the Eldrazi Conscription that sealed Game 1 only moments before. Guillaume sent the Rapacious One into the red zone. After a bit of thought Matt blocked with his Umbra'd Enforcer. Heat Ray from Guillaume took out the Boar Umbra, the Enforcer was then destroyed in combat and trample damage brought Matt to 12. He had no action on the following turn and knew the end was near. A second attack from the Rapacious One and Nest Invader dropped Matt to 5. Matt looked at his next card, hoping for the best, but could only extend his hand. Guillaume Matignon moved to 7-0. 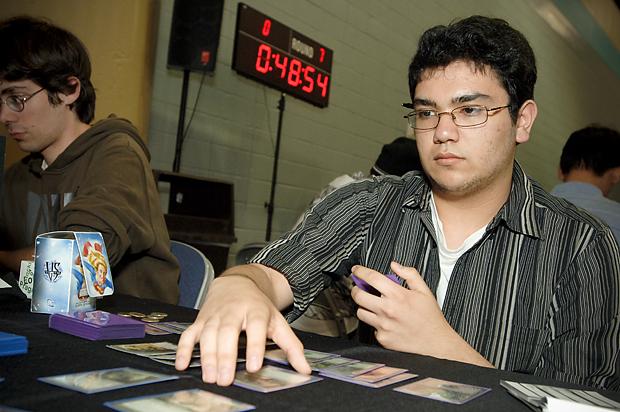