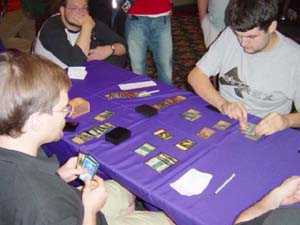 "Have I ever beaten you?" Baby Huey mused. "I mean, in a real tournament. You beat me in Minnesota... You beat me on the boat in LA..."

Today was William "Baby Huey" Jensen's chance - but just a chance - to finally trounce Rob Dougherty, owner and founder of the famed pro sweatshop Your Move Games in Boston. Today, both of them are six and one - and with six hundred and seven people in attendance in Cleveland today, all probability the loser gets to finish out the day in ignominy, while the winner gets a chance to go to the fabled Day Two. The two of them have been playing for four years straight, but...

"I don't think I've ever beaten you," concluded Jensen in mild amazement.

If Jensen's going to beat Dougherty today, at least he'll do it in style; Jensen's running an unconventional black-red disruption deck, giving a faint hope to people that the mythical color "red" may be alive and well in Odyssey block. Dougherty, on the other hand, is playing the five zillionth latest iteration of blue-green deck, the anti-black build complete with Quiet Speculations and Grizzly Fates.

The both of them shuffled up and scanned about for a way to figure out who went first; turns out neither of them had dice. "That's the problem with being up here," deadpanned Jensen. "You play against a random? They always have a die."

It was suggested that perhaps the two of them play rock, paper, scissors to decide who would go first, but Jensen said that it wasn't random enough. "Rock, paper, scissors is strategy," he said earnestly. "I think I could psych someone out at rock, paper, scissors." Eventually, someone donated not only a twenty, but a twelve-sider and a ten-sider, and they rolled all three and added them up to see who went first. Jensen snagged it with a 22.

He briefly dumped the cards into his graveyard, then remembered the wording on Pact and scooped them back into the "out of game" zone. "Heh," he chuckled. "I'm trying to cheat Rob in a Feature Match!"

Jensen then spent his next turn merrily Rancid Earthing Rob's island; Dougherty simply laid another and charged in with the bear and the lizard, but looked slightly miffed when Jensen took the next turn to Earth Rift - Earth Rift! - the island, leaving Rob with a single forest. He laid another, pumped the 'Walla, and sent them in to knock Jensen down to 12.

Jensen Mutilated, to no one's surprise.

Down to two land, Dougherty had to decide: Wild Mongrel or Quiet Speculation? He juked left and instead Careful Studied, getting a third land to Mongrel it up. Jensen looked through both graveyards, counted something under his breath... And responded with a 7/7 Magnivore stolen straight from little Timmy's dreams and smashed past the Mongrel. Dougherty sucked the pain stoically.

Dougherty drew a Mental Note, which was not particularly helpful unless he felt like enlarging the Magnivore... So he instead Roared straight out of his graveyard to bring the Magnivore on an even level with his Wurm, then attacked with Mongrel.

Jensen wasn't impressed. He cast Tainted Pact, blitzing past Earth Rift, Innocent Blood, Tainted Peak, and Shadowblood Ridge... And finally picked a Burning Wish, with which he snagged a Recoup and then Recouped his Chainer's Edict with no mana to spare. 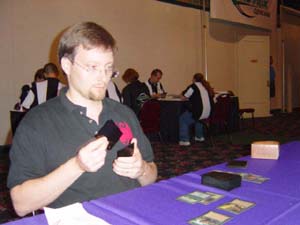 Rob picked up Recoup and read it very carefully, for which no one in the room had the heart to blame him.

The Magnivore drops Dougherty to six, setting the clock at one turn unless he can block. Rob swung his mighty wurm across the table to smack Jensen and put him at four, then Quietly Speculated for a couple of Roars and an Acorn Harvest, paying three life for some much-needed chump blockers but causing Jensen to crack a grin.

He pointed at his 9/9 Magnivore, bloated by the two fresh sorceries in the yard. "Big," he said.

On Jensen's turn, he Recouped a Mutilate and shrunk all the creatures on the board by -6/-6... Which was just enough to make his own Magnivore a 3/3. And in lieu of Rob having no blockers and being at three life, that was pretty much game.

"I am a nonconformist," Jensen shrugged, looking at his deck. Rob elects to go first, and they both wondered whether anyone in this entire tournament has elected to draw if they've had the choice. Neither of them thought anyone had.

Rob grabbed his first seven cards, discovering a single forest. He shipped it back while Jensen cracked his knuckles. The next six cards, after a thorough shuffle, yielded a single Centaur Garden that said, "Hi! I'll cause you pain and manascrew at the same time!" He sent that back.

The five-card mulligan was about what you could hope for: Careful Study, Island, Forest, Rootwalla, and a Quiet Speculation. However, proving that he is indeed smarter than the average bear token, Dougherty did not go for the really cool turn one play in the face of Jensen's heavy-creaturekill deck, which would drop a innocent Rootwalla straight into an Innocent Blood. Instead, he waited until turn 2 to Quietly Speculate for two Roars and an Acorn Harvest.

Well, that seemed like a good plan until Jensen dropped a Catalyst Stone. So much for an early Harvest; Rob instead Careful Studied out a Rootwalla and a far-too-expensive Upheaval, then played Mongrel. Jensen responded by playing Overmaster - Overmaster! Remember the Sideboard previews when someone said that it might be good somewhere? - to cantrip a sorcery, and Innocent Blooded. The Rootwalla, having lived as long as it can expect to versus a deck packing black spells, died.

Dougherty, stuck on three land, used the turn to Quietly Speculate all the uncastable Roar of the Wurms out of his deck and into the graveyard, thus increasing his chances of drawing land. This has the unfortunate side effect of making Jensen's potential Magnivores huge... but Dougherty was holding onto a Grizzly Fate and needed to cast it for chump blockers, not to mention the Acorn Harvest that he could once he hits four mana.

Jensen would have loved to cast a huge Magnivore right then, but unfortunately he only had one red mana. Instead, he simply Recouped the Innocent Blood in his graveyard and offed the Mongrel. 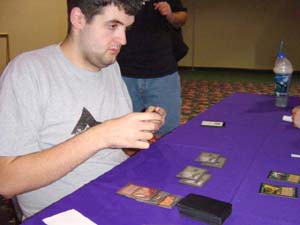 Rob drew a fourth mana source - a Centaur Garden - and paid the three life for the Harvest, taking one from the Garden. "A bargain," he said, throwing two 1/1 chumpers into play; unfortunately, Jensen had Mirari out, and after a small squeak for two damage, a double-Edict the next sent the tokens to squirrel heaven.

Dougherty still had not drawn land, but he did have another Grizzly Fate, which he could cast for four 2/2s if he only had the mana. Sadly, Jensen's red mana arrived right on schedule, and the Magnivore came blasting through. All the Speculated Roars, discarded Upheavals, and cast Studies made this 'Vore a massive 11/11. Bam.

Dougherty drew... Envelop, and packed it in.

After the game, Jensen and Dougherty discussed their strategies; if Rob had drawn a land, he could have Grizzly Fated, which would have allowed some chump blockers for the Magnivore. Alas, Jensen had a Mind Sludge in hand, which meant that winning would still have been tricky... But then again, at six mana Dougherty could have started casting those Wurms.

But that's mere speculation, albeit far from quiet. As it stands, Baby Huey finally got off his win.