Round 7: William Chong vs. Sam Stein 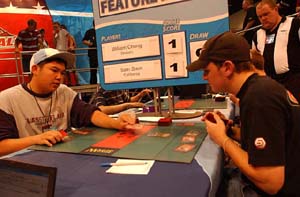 William is from Ontario, and qualified through a JSS tournament there. He qualified for Canadian Nationals, but he couldn't attend due to school commitments. "I want to say hello to Wensoi Wong, my girlfriend in Ontario," he commented.

Sam is from Los Angeles, and he qualified for this tournament off of rating, rather than by winning a JSS qualifier. He's had 2 PTQ Top 8s before as well. "Hi to my mom and dad," he said before the match.

William led with a Llanowar Elf, and Sam countered with a Grim Lavamancer of his own. William played a Basking Rootwalla, going for some early offense. He Firebolted Sam's Lavamancer on his next turn, and attacked to bring Sam to 16. Sam played a Call of the Herd, and looked around for some tokens. "I have some elephants," William said as he handed one over to his opponent.

It didn't stay long, as William hit the Elephant with a Volcanic Hammer. But Sam flashed back the Call of the Herd and took possession of the elephant once more. He played a Basking Rootwalla of his own and passed the turn.

William played another land and attacked with his Rootwalla, walking right into Sam's Rootwalla. Both players opted to pump the Rootwalla to trade. William's next play was a Phantom Centaur, complete with the requisite "I've forgotten my counters" pieces of paper. 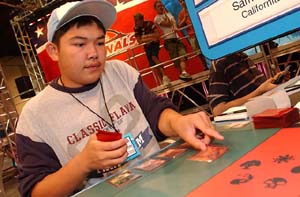 When William attacked again, Sam blocked the Llanowar Elf with his Elephant and let the Centaur through. William then flashed back the Firebolt to kill the Elephant. Sam threw a Volcanic Hammer at the Centaur, but William played a Call of the Herd of his own on his next turn. With enough land in play, he flashed it back immediately.

William attacked with both Elephants and the Centaur (which only had one counter on it). Sam blocked with a Llanowar Elf, but he couldn't draw any more creatures, and the game ended shortly after.

Sam began this game with a Wooded Foothills, the sacrificed it to search out a Forest. He then cast a Llanowar Elves. William's first play was a mountain and a Grim Lavamancer. His side of the table looked very barren, though, when Sam played a Wild Mongrel and a Lavamancer of his own on his next turn.

Sam played a Phantom Centaur on his third turn, and William's only response was a Call of the Herd. Sam then discarded a forest to make his Wild Mongrel black, and then used his Lavamancer to get rid of William's Lavamancer. 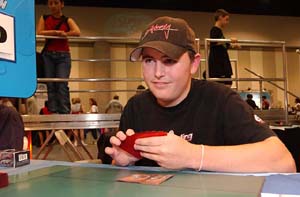 William played another land and tapped everything. "One, two, one," he said, tapping Violent Eruption on Llanowar Elf, Wild Mongrel, and Lavamancer, all in that order. He repeated it next turn, but couldn't find a way to kill Sam's previously played Phantom Centaur. Sam swung back for more than William could handle, and the game was over quickly.

Sam endured some good-natured teasing from his friends at the beginning of this game, but just smiled about it. William led with a Wooded Foothills, which found him a forest, and Sam played a Mountain. Neither player had a first-turn creature, though, which was surprising in this red-green mirror match.

Sam's second land was another mountain, and William played a few mountains of his own. Sam chose to discard a Call of the Herd, and drew the forest he needed to cast it a turn too late. William's first creature was a Grim Lavamancer, which died quickly to a Firebolt from Sam.

The first creature to hit play and stick around was a Wild Mongrel on Sam's side. When Sam tried to play an Elephant Guide on the Mongrel, William hit it with a Violent Eruption for four. Sam instead chose to pitch almost his whole hand to save the Mongrel, reasoning that quick beats are better than a long, drawn-out contest.

Sam attacked again and pumped the Wild Mongrel with Violent Eruption, then cast the Eruption for its madness cost. Pitching the last card in his hand (a Threaten), Sam did the math and William extended the hand.