Round 7: William Jensen vs. Mike Long 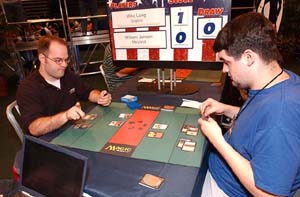 Mike Long has to be considered one of the all time greats. He's won a Pro Tour, made three US National teams and always been at the center of the pro Tour's most fascinating story lines, but as of late, he's fallen on hard times. Time and again over the last couple of years, Mike has gone to Pro Tours only to crash and burn, landing in the mid-200s of each tournament dating back to the problems he had in the US Booster draft challenge two years ago. Now, he's trying to fight his way back, with a 4-2 record in Standard leaving him with a chance for Sunday play, but standing in his way in this, the first round of limited play, is one huge obstacle: Baby Huey a.k.a. Billy Jensen.

Considered by many to be the favorite coming in, Jensen started the tournament with a 4-2 record in his weaker format, and is now prepared to try and run the gauntlet to top 8. Jensen drafted a powerful red-white deck featuring Violent Eruption and Fledgling Dragon, while Long countered with a black-white monstrosity featuring Cabal Patriarch and a Diabolic Tutor to find it with.

Things started quickly, with Jensen's Mystic Familiar coming into play on turn two only to be matched by Long's Crypt Creeper. Jensen then cast Shieldmage Advocate and took Long to eighteen before the Creeper evened the score and Chainer's Edict beheaded the Familiar. 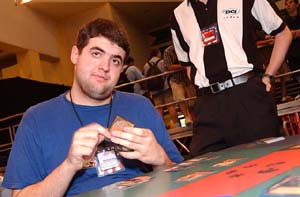 Billy then cast Beloved Chaplain, and when Mike tried to impose the Patriarch's Desire upon it, it was given protection from black by Shelter, with Lava Dart taking out the Creeper on Jensen's next turn, allowing the giant to attack for two, taking the score to 18-16 in his favor. Long tried to stem the tide, playing his own Shieldmage Advocate, but before it became active, Jensen cast Fiery Temper, ending it's short lived appearance in play. Long then cast Soul Scourge, but it died when Jensen flashed back the Lava Dart and cast Infectious Rage, killing it. The Rage came into play, killing the Chaplain, then enchanted the Advocate, allowing the former 1/3 to attack for three points, taking Long to eleven. Mike then cast Gravedigger, bringing his Advocate back to his hand, and after Huey took his turn, played a Mesmeric Fiend, taking nothing as Jensen showed two Plains. Long, knowing it was safe, then cast Diabolic Tutor, searching out Cabal Patriarch. Jensen's best reply on his next turn was Ember Beast, but after the 5/5 hit, Pardic Firecat entered play, allowing Jensen to get three points of damage in., but even with Long at eight, it wasn't looking good for the big man. The Advocate and Childhood Horror resolved on Long's side, and a turn later the Edict was flashed back, killing the Beast, with one more draw showing Jensen he couldn't win.

Talking throughout the sideboarding period, Long's casual manner portrayed a picture of confidence. With the best black card in the format in his otherwise solid deck, it was easy to see why. Billy chose to play first, decks were presented and play began again.

Despite drawing first, Long started things off with a second turn Phantom Nomad, which was joined by a second after Jensen cast Vigilent Sentry on turn three. Jensen's fourth turn Pardic Firecat slowed Mike's offense before the fifth turn Fledgling Dragon inspired a giggle of excitement from Long, who then played Treacherous Vampire before the Dragon took him to 18. Long then made a huge mistake, attacking with the Vampire with no cards in the graveyard, and upon the realization that it would die, made a couple of self-disparaging remarks, including 'it'll happen to you too when you get old', inspiring a laugh from observers as the Virginian shook his head. 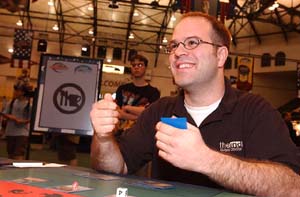 Long's next turn though was a little better, as he played a sixth land and cast Cabal Patriarch. Billy's only reply was untap and attack with everything. After the two Nomads blocked Ember Beast, going to 1/1 each, Jensen cast Infectious Rage, with the ensuing die roll killing the second Phantom before the Rage came to rest on Vigilent Sentry. Long then cast Shieldmage Advocate before Jensen sent in the troops for another attack, with the Patriarch killing the Firecat and Long going to six life. Billy then cast Sonic Seizure in an attempt to kill the Patriarch, but Mike had a trick waiting in Prismatic Strands, which named red. The next turn, the Patriarch cleared Jensen's table, leaving the Rage to make it 7/4, and with the untapped Advocate protecting his life total, Mike cast Diabolic Tutor immediately declaring his decision to do so a mistake, then upgrading it to 'the worst play I've ever seen' before playing a land, leaving the Tutored-for card in hand, attacking to take Jensen to four and passing the turn.

Mike attacked for what looked to be the last of it, but Jensen had a saving grace in Temporary Insanity, which targeted the Advocate. Mike went to respond by paying Prismatic Strands' flashback, but then asked 'the Rage doesn't make this guy red, does it? I used to make fun of Justice when he did this', Regardless of Long's self-perceived inadequacies, a turn later he finished Jensen off.