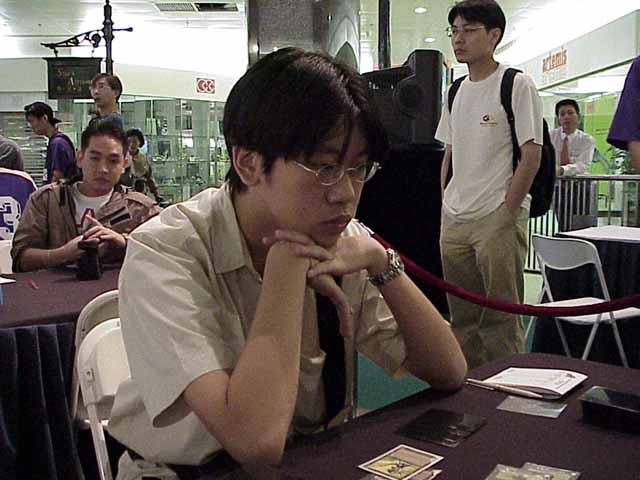 Day One of the APAC championships was good to the local Hong Kong players. Not only was Chi Fai Ng in first place, but Wing Lok Tam went 5-0-1 to wind up in third place as the Standard day began. His opponent was a player from Singapore named Robin Hee Tee Pong.

Tam had a fairly typical Stompy deck. His version includes a couple Hurricanes to use as surprise finishers and he runs four Elvish Lyrists instead of maxing out on Dogs and Jaguars. Pong's deck is anything but typical. It's basically a Prison deck, using Parallax Tide and a bunch of bounce to deny his opponent all their mana. Pong's deck also runs Rishadan Cutpurse, Rishadan Footpad, and Tangle Wire to punish the opponent for not having any land. Ankh of Mishra is the primary route to victory, especially since it triggers whenever anyone gets land back because a Parallax Tide left play.

Interestingly, Pong was really worried about Stompy so he chose to splash black just so he could include three copies of Perish in his sideboard.

Tam won the die roll and started out with a Lyrist and an Elvish Archers. On his third turn, Tam tried to add three extra damage to his attack by Giant Growthing the Lyrist, but Pong had Boomerang ready! Pong capitalized on his new momentum by casting a Tangle Wire on his third turn. Since Tam only had two lands, the Tangle Wire shut him down or several turns. For his next trick, Pong played out Temporal Adept and Ankh of Mishra. When Pong dropped Parallax Tide on his next turn, things were looking really grim for Tam. 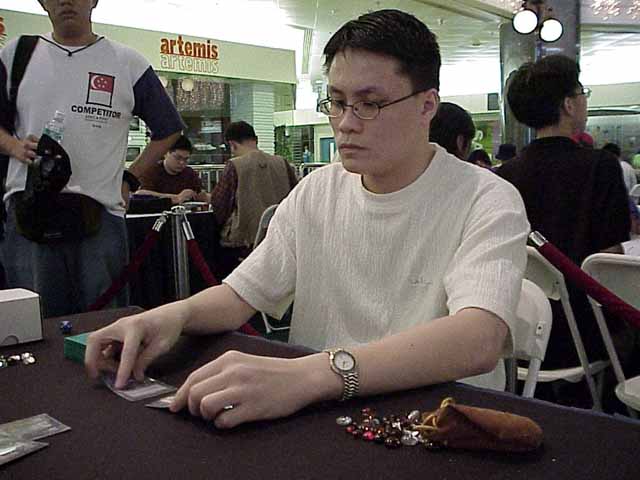 Pong used Rescind to return his own Parallax Tide to his hand, dealing six damage to Tam via Ankh of Mishra and then dealing eight more damage on the Tide's second time around. However, once Pong's Wire and Wave faded away, it wasn't easy for him to deal the last few points of damage. Tam's Rancor made it really hard for Pong to make effective use of the two Rishadan Footpads in his hand. Eventually, Pong was able to play them and use Temporal Adept to bounce many of Tam's creatures. Finally, Pong snuck in for enough damage to force Tam to play defense and when Tam forgot to pay echo for a Pouncing Jaguar, he didn't have enough blockers to stay alive.

Pong had to be happy to take game one from Stompy an then get to add Perish to his deck. However, his game two draw wasn't nearly as good as his game one draw. He kept land, two Parallax Tides, and a Hoodwink. Pong tried to use Hoodwink to slow the game down, but Tam played Llanowar Elves, River Boa, and Rancor on his first two turns followed by Elvish Archers on his third turn. By the time Pong built up to turn 4 Footpad, all the Footpad could do was chump block and Giant Growth finished off a fifth turn kill for Tam. 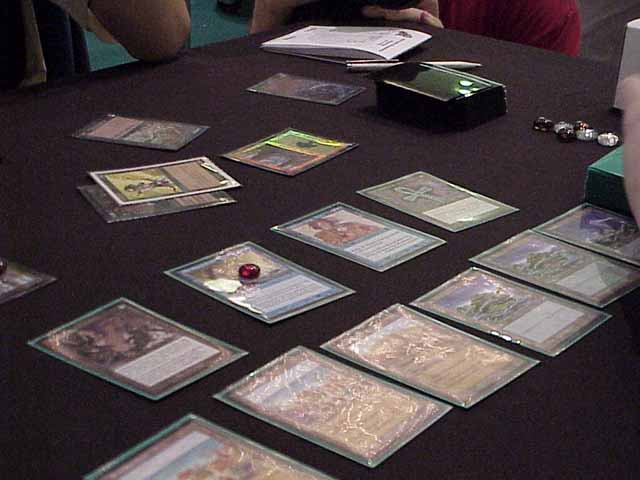 Pong's game three draw included bounce, Parallax Tide, and Ankh of Mishra. He used Hoodwink to prevent Tam from building up to two land until Tam's fourth turn. However, Tam once again had a rancor and that once again prevented Pong from making effective use of his pirates. When the Footpad tried to trade with a Rancored Lyrist, Tam threw two Giant Growths down and dropped Pong all the way to 4. Pong's had of two Ankhs of Mishra and a Parallax Tide couldn't do anything about a Rancored 1/1 so Tam won a turn later. Things might have been different if Pong had ever drawn Perish, but he didn't and Tam took the match 2-1 to move into second place and set up the Round Eight, Table One all-Hong Kong battle between himself and Ng.