Round 7: Word of Mouth vs. The Black Hole 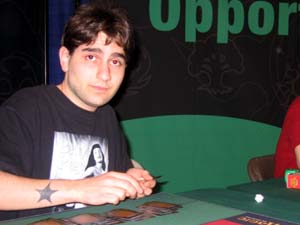 thirds of Team Antarctica sat down to face-off against what remained of Team Sped. Along with Jon Finkel the OMS brothers were part of a team that dominated the early days of Team Limited. They barely play anymore as they have graduated from school and taken on real jobs. They now live in the New England area and have teamed up with "Mouth" Kambourakis who was recently reinstated to the DCI. Don't dismiss the this as a weekend lark. The team actually had byes for this event by virtue of winning a Grand Prix Trial and both Steve and Dan have been spotted at individual PTQs in the recent past.

Team Sped were the bad boys of the East Coast Magic scene throughout the nineties and were instrumental in forming the regional Magic slang--not all of which is suitable for a family website. Eli Kassis was a little young for the Sped scene but continues to be one of the top players in the upstate New York region. Both teams found themselves at 4-1-1 and a loss would leave them out of contention for Day Two.
Game 1 (Steve OMS vs. Rory Walker)

Rory's turn two Silver Myr looked puny in the shadow of a Razor Golem. Rory had his own Golem on turn three--this one of the Spire variety. Rory sent back the turn chanting for, "No equipment." Steve attacked with Razor Golem and Rory decided to block. Steve had Roar of the Kha and killed the 2/4 flier. After combat Steve added a Gold Myr.

Rory hand exploded with Arcbound Stinger, Frogmite and Somber Hoverguard. Steve pushed his Razor Golem toward the red zone and this time there was no blocking on Rory's part. He untapped and played a Fatespinner--Steve had to read the card several times but when his turn came he quickly announced, "main phase."

He attacked with his Golem and Rory put everyone in the way but his Fatespinner and Somber Hoverguard. Steve used Altar's Light on the Frogmite and killed the other two. The game was coming rushing back to Steve, "I just went three-for-one."

Steve killed the Hoverguard when it double blocked with Fatespinner but lost his Golem in the transaction. Rory was all-land and just passed the turn to Steve who skipped combat and played a Clockwork Condor and then a Platinum Angel on the next turn. He was back to skipping main phases with seven points of air power.

Rory attacked with Fatespinner and an Arcbound Hybrid but he was holding a fistful of lands--ten of the fifteen in his deck were in play or in hand.

Dan and Mouth both dropped their first games to Joe and Eli respectively. Despite his early excitement over a Spikeshot in the face of a green-white deck, Mouth drew into ten or eleven lands of his own. He was still excited to be in the feature match area since his girlfriend Michelle would be reading and wanted to say, "Hi!"

Game 2 (Steve OMS vs. Rory Walker)
Turn three brought an Arcbound Stinger from Rory while Steve's three Plains yielded a Soldier Replica. Rory dug for cards with a Thoughtcast on the next turn but did not find a fourth land. Steve took advantage of a tapped out opponent to play a Sword of Fire and Ice. "I am probably not winning. I have no land!"

Rory looked for answers in his full grip but only had three lands available. He main phased a Scale of Chiss-Goria and passed the turn. Steve played a Pteron Ghost and when he attempted to equip the Soldier it was bounced with Echoing Truth. 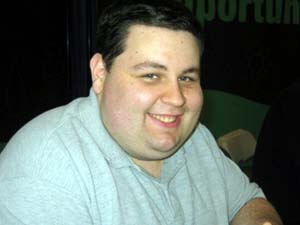 "That was lucky." Rory played a Mask of Memory and equipped the Stinger. "Good thing I played that Scale. I would have had to discard otherwise. Steve chose not to block and the extra cards found Rory an Ancient Den. Steve smoked the Stinger with his equipped Pteron Ghost, did three to Rory, and drew a card to boot. Steve played an Isochron Scepter and imprinted it with Test of Faith after his attack.

Rory shook his head, "This is probably a mistake but I am going to Thoughtcast." He sighed in relief at an Island and was able to play Rustspore Ram targeting the Sword. Steve read the card and thought for a moment before saving the equipment with his Ghost.

Steve has a Soldier Replica and equipped it. Rory's Neurok Familiar flipped over a Thunderstaff. He added a Spire Golem to the board and equipped his Familiar with Mask of Memory.

Steve had Blinding beam to lock down the Ram and Golem. His Familiar could not block and it fell to the two damage dealt by the Sword. "C'mon Steve. Give me a chance here." Steve played two Leonin Bolas and an Arcbound Reclaimer.

Rory's Cobalt Golem picked up a Mask and stood in the path of the team. Steve's game suddenly took a turn for the worse when Rory played his own Platinum Angel. The blonde New Yorker shook his head and looked at the Angel that had betrayed him the previous round in match with Sam Gommersall, "Last round someone killed this with Bloodscent." There was little danger of that happening with Steve's board of all Plains--he was also holding Platinum Angel by the way.

Steve attacked with his Soldier and used the Test of Faith to make it bigger when the Ram blocked. Rory got in for four with his Angel after Steve tapped the equipped Golem. Rory cast Thunderstaff and passed the turn back to Steve who played his own Platinum Angel. Both players counted cards--which was amusing since decking was not going to be a factor.

Steve moved the Sword to his Platinum Angel and equipped his Replica with a Bola but passed the turn without incident. When Rory sent it back with no play, Steve tapped the Angel and the Spire Golem. He untapped and attacked with his 6/6 Angel. Steve did seven to Rory and drew a card. He played a Loxodon Mystic.

Steve did the same thing at the end of Rory's next turn and untapped to drop Rory to negative one on his next attack. With extra card draw he eventually found his Altar's Light and removed the enemy Angel from the game. Rory extended his hand and glared at the Arcbound Reclaimer. "I would have won if not for that thing…I was holding Annul when you played your Angel but what was the point?" 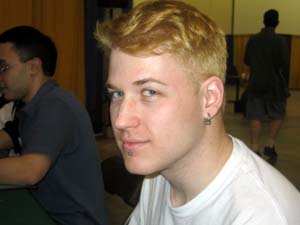 Joe Weber dispatched Dan OMS in short order. Mouth mounted a comeback and forced a Game 3. His Spikeshot Goblin went all the way with a Vulshok Morningstar and Wurmskin Forger tokens to enhance it. Mouth leaped up and congratulated Steve on the win, "I couldn't remember if you had the Altar's Light in this card pool or the last one!"