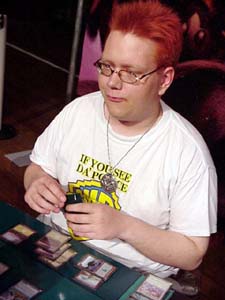 First of all we have a message from Tomi Walamies. He would like to send his greetings to Jesus Belle. So there you go, the Finnish got his wish. We never say no to a Magic player with pink hair, especially when it's such a simple thing.

It's the last round of a very long day and these two probably just want to get things over with. Tomorrow they still have to run through seven rounds of the last big Standard tournament before Judgment so there is probably a lot of metagaming still to do today.

Walamies started things off with Cephalid Looter followed by Spirit Cairn to set himself a nice little combo right there. All this before Yuri even made his first move. Compared to that nifty token producer his Springing Tiger wasn't quite as impressive.

It got even less impressive when Walamies locked it under Kirtar's Desire before playing two Aquamoebas. Kolomeyko decided he might as well get tricky so he played Shade's Form on Tomi's Looter before killing it with Morbid Hunger.

He got himself a nice Looter but Walamies already had three flying tokens creating high altitude havoc and the two Aquamoebas promised more. Eyebrows raised a little more higher as Walamies attacked with his six creatures before playing Keep Watch!

The Ukrainian decided not to block falling all the way down to ten. He drew an extra card, smiled and shook his head in utter disbelief before conceding.

Things didn't start well for Kolomeyko had thought long and hard about mulliganing. He eventually took it but didn't seem to pleased with his second hand as well. To keep things fair Walamies took a mulligan as well.

The Ukrainian started with Mystic Familiar, Phantom Tiger and Cabal Trainee while Walamies was up to his usual wicked ways with Aquamoeba and Spirit Cairn.

The Finnish decided not to attack but Yuri felt confident about sending his army in. Up came a spirit token to slow down the Tiger as the Familiar sneaked through. Walamies retaliated with his Aquamoeba getting another token in the process.

Eager to get help Kolomeyko Executed the token for the extra card. On his turn he attacked with everyone and Tomi let the damage through. In came a Springing Tiger, forcing Walamies to keep the Aquamoeba at home.

When the Mystic Familiar came in alone the Finnish showed a Second Thoughts. Out went Yuri's current plan for victory. But he immediately played another creature that could upset the current balance: Cabal Torturer.

The Finnish figured he might as well play real creatures so he dropped Mirror Wall and Aven Flock while Yuri pumped out weenies in the shape of Filthy Cur and Phantom Nomad. He pondered for a moment and sent everyone in, keeping only the Torturer back for those essential combat damage tricks.

When the dust cleared Yuri lost three creatures to Tomi's two and dealt one point of damage. The Finnish now had Cairn and Mirror Wall while Yuri had Cur, Nomad and Torturer.

Coral Net showed up to take the Nomad away. To keep things balanced Kolokeyko added Shade's Form to his Cur but Walamies was way ahead of him, playing a crucial Militant Sentry with Threshold.

In came the crazed Filthy Cur dropping Walamies to a lowly four life points. Still the Finnish felt confident enough to attack with his Mirror Wall. Yuri needed a way past the Sentry and found it in Zombie Assassin.

After thinking for a few minutes Walamies sent the Sentry and Wall in. Kolomeyko took the gamble and dropped to four. He sent the Cur and Torturer in and Walamies announced no blockers.

Again Kolomeyko agonized over what tricks Walamies could have. Eventually he pumped his Cur once for enough damage to finish the game. The Finnish scooped.

Tomi: "Good games. Well, the first one wasn't as good as this one."
Yuri: "Yeah, I didn't really like the first one."
Tomi: "My draw was just insane."

They started the game as lightning pace since they were short on time and having a draw already didn't want to pick up another. Walamies had Aquamoeba while Yuri played Phantom Nomad and Cabal Torturer (which promptly got Lost in Thoughts).

Creatures kept piling in and the pace slowed down with little more than ten minutes on the clock. Stupefying Touch stopped Militant Monk and Aquamoeba attacked. A block and Two Guided Strikes later it traded with the Monk. 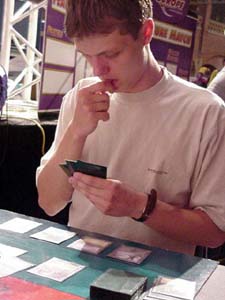 The Ukrainian finally dropped the elbow: Giant Warthog. With only Mirror Wall on the table Walamies needed to regroup fast. He played Balshan Griffin and let the Warthog through.

A double-action Crippling Fatigue cleaned Walamies side of the table (since the Wall had blocked the Nomad) and things were very, very grim for the Finnish. He played Auramancer and Skywing Aven and again let the Warthog through.

Afflict and the departing Nomad were enough to get rid of Auramancer again leaving the desperate Finnish, now at ten, again with a single creature. Still he attacked with Skywing Aven before dropping a blocker in the defensive shape of Wormfang Crab.

The Cabal Torturer got REALLY bewildered when it found out it wasn't only Lost in Thoughts but also affected by a Stupefying Touch. This made it unable to reduce the Crab to a size small enough to get nuked by the Warthog in combat.

So Tomi now had a blocker for the huge Warthog and if he could afford to take one more hit (which he could) he could also take out the newly casted Springing Tiger. But Yuri is no slouch and had a good answer to this new dilemma: Shade's Form on the Tiger.

Walamies had no option but to block the Tiger and take five from the Warthog. A Mystic Familiar showed up to further deepen Tomi' troubles. But the Finnish also had a few extra tricks to play.

In came Military Sentry and Kirtar's Desire on the Tiger. Suddenly Yuri was back to quite blockable Warthog and the Familiar. A Looter helped Walamies find a solution for another Torturer in the shape of another Stupefying Touch just as time was called.

With such a complicated table, and Walamies at three the five extra turns took ages. The key action was Walamies desperate need to stop the Familiar at any cost. At this rate Kolomeyko would kill him in the last extra turn. Still the Ukrainian pounded his deck before each draw step.

Tomi: "It looks like you want to draw something."

With only lands in hand Kolomeyko suddenly blinked: he sent everyone in, removing cards to counter the annoying spells. Before blocking Walamies used Keep Watch to draw four extra cards.

Then he carefully blocked and used Second Thoughts to get rid of the annoying Familiar. A single point of damage sneaked through leaving the Finnish at one. With Yuri at fifteen it looked possible for Tomi to win but the table looked secure enough to guarantee the draw.

Still he attacked with everyone dropping his opponent to one and played Aquamoeba, a second Crab and ANOTHER Stupefying Touch. Yuri drew his last cards and conceded in visible disgust, much to the relief of Tomi Walamies.

He had pulled out the game in the last possible chance.