Round 7:
A Delver Mirror

In the last round of Day One, the first question between Paulo Vitor Damo da Rosa and Denniz Rachid wasn't how they were doing as individuals. It was "How was your team doing?" They didn't ask about personal scores, they wanted to know how their national team would do. They discussed the cut; were their teams safe? Could the unthinkable happen, knocking them out in a blindside?

Paulo won the roll and elected to play first. It was a careful consideration whether to keep or mulligan, but he decided to mulligan—as did Denniz. Paulo kept his six, but Denniz mulliganed again, opting to try his luck with five cards.

Only then, after team rankings had been discussed thoroughly, did discussion come to personal performances and how they did in the two formats for the day. 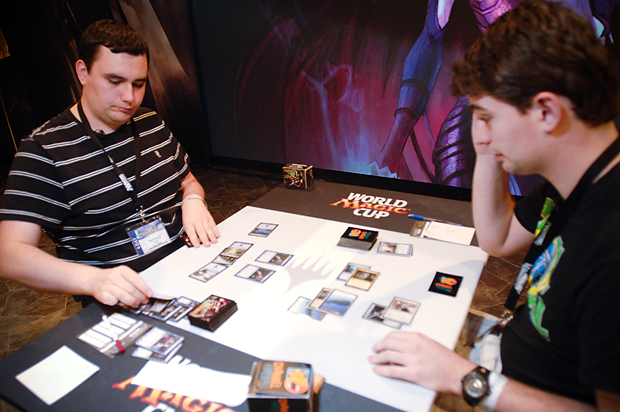 Paulo Vitor Damo da Rosa of Brazil and Denniz Rachid of Sweden discuss the performance of their respective nations.

PV dropped Island and cast Ponder, shuffling away the three cards before drawing. Denniz drew, casting Gitaxian Probe with 2 life before even dropping his first land, taking him to 18. Paulo revealed his hand being Delver of Secrets, Restoration Angel, Island, Island, and Cavern of Souls. After making notes, Denniz played an Island into Delver of Secrets before passing the turn.

Paulo cast a Gitaxian Probe of his own, then a second Island for his own Delver of Secrets to then pass the turn back. Denniz looked in his upkeep, kept without revealing, and drew for his turn. His second Island came down. Denniz opted to attack with Delver of Secrets; with only a moment's thought the players trade. Denniz Snapcastered back Gitaxian Probe and passed. Paulo drew and dropped Moorland Haunt and ends his turn.

Denniz drew and cast Thought Scour, milling two and drawing, before dropping an Island and attacking with Snapcaster Mage. Paulo's life was at 18, to Denniz's 16. Paulo drew, dropped Cavern of Souls naming Human, and passed. Denniz drew, cast Thought Scour, and milled away a Thought Scour and Restoration Angel. With three mana up, he considered carefully before passing. Paulo flashed in his own Restoration Angel at the end of turn. On his turn he paid two for Runechanter's Pike, equipped, and swung with the Angel, dealing 5 damage and putting Denniz to 11.

Denniz drew and Snapcastered a Thought Scour to mill away two Seachrome Coasts. He drew for it and then cast his own Ponder. Denniz had two Snapcasters on board facing Paulo's Angel with a Pike. He updated his notes on what he knew was in Paulo's hand, finished reordering for Ponder, then drew and played a tapped Seachrome Coast. Denniz attacked with both Snapcasters to take Paulo to 14 before Vapor Snagging the Angel and dealing 1 to Paulo, knocking him to 13.

Paulo drew, tapped two to play Invisible Stalker, and with four mana up he passed the turn.

At a life total of Denniz's 11 to Paulo's 13, Denniz drew, bringing his hand to four cards. He paid three mana and dropped Geist of Saint Traft. Paulo flashed in another Angel at the end of Denniz's turn. Paulo drew, paid two to equip the Angel with the Runechanter's Pike, and attacked for 5, knocking Denniz down to 6. Paulo considered his hand and played a Glacial Fortress before moving the Pike to his other creature for defense. With one card in hand he considered what to do, carefully playing through the combat scenarios in his head.

Denniz took his turn and carefully considered before passing the turn back to Paulo. End of turn Paulo used Moorland Haunt to put a token into play. On Paulo's turn, he alpha striked, swinging with all his guys. He had two cards in hand and 7 life to Denniz's 6. Dennis flashed in a third Snapcaster Mage to bring Vapor Snag back to his hand; he played it and targeted the Angel. Paulo took 1 and went to 12. But it's too little too late as Denniz declared no blocked and Paulo paid 2 life to Gut Shot him, winning Game 1.

Both players collected their cards and began sideboarding. Both opted for only a handful of changes in this mirror match. And then they were shuffling up, preparing for what could be their last game of Day 1 of the first World Magic Cup.

Paulo swung with an unflipped Delver of Secrets back on his turn, putting Denniz at 19. Paulo then dropped a Fortress of his own and played Runechanter's Pike.

Denniz played Augur of Bolas, quickly putting all three cards on the bottom of his library. Paulo cast Delver of Secrets, looked at the three cards, reorganized them, and drew off the top without shuffling. A second Delver of Secrets came down and he passed the turn. Denniz drew, playing his second Augur, and put Ponder into his hand. He attacked with Augur and knocked Paulo from 18 to 17.

Paulo revealed Mana Leak off the top, as the first Delver of Secrets flipped, Denniz Gut Shot the other before it had a chance to flip. Denniz dropped even with Paulo at 17 life. Paulo played Cavern of Souls naming Human, and swung with the Pike on his Insectile Aberration, dealing 5 to Denniz.

Denniz was stuck on two lands; he Pondered again and this time opted to shuffle his library in hopes of pulling a land to the top. Denniz drew and looked unhappy; he was forced to swing with both Augurs, taking Paulo to 15. Paulo untapped and drew, dropping another Glacial Fortress before attacking for another 5 to push Denniz to 7.

Denniz tried to snag the Aberration but found it Mana Leaked. Denniz finally drew another Island, putting it into play and giving him three mana available. He cast Snapcaster, targeting Snag, which he played to bounce the Delver of Secrets. Paulo went to 13. On Paulo's turn he recast Delver of Secrets and equipped it with the Pike before passing, leaving three mana up.

Denniz had two Augurs, a Snapcaster Mage, and three mana on the board in front of him. He Thought Scoured himself, milling two lands, before he drew. Denniz cast Divine Offering on the Pike. He swung in with the Snapcaster and one of his two Augurs, leaving the other back to block. Paulo considered before Gut Shotting the Snapcaster, paying 2 life and putting himself down to 10, while Denniz was still at 9.

Casting a new Pike, Paulo equipped and swung into Denniz's untapped Augur. With a point of life in disadvantage, Denniz opted to block and save himself the damage, killing an Augur of Bolas. 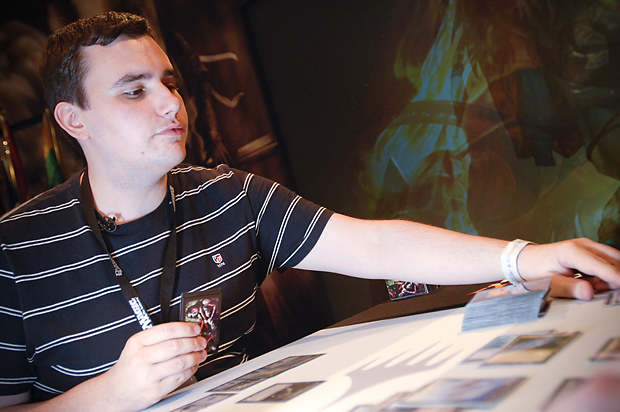 Denniz drew and leaned back in his chair, dropping a tapped Seachrome Coast as his fifth land. He passed the turn. Paulo revealed Thought Scour on his upkeep to flip Delver of Secrets. Paulo moved to attack but reconsidered, taking a moment to survey the board. Denniz had four untapped mana representing a possible Restoration Angel. Paulo Thought Scoured in response, but let the Angel resolve. Angel flickered the Augur, and after looking he put all three cards on the bottom of his library. The Angel then blocked the Aberration and died to it and its Pike.

Denniz Thought Scoured during his main phase milling an Island and another Thought Scour. He wipes hid forehead, then cast a Pike of his own and equipped to swing. Suddenly, from what had seemed a tenuous footing, he had the win with a Gut Shot at the last moment to push it into lethal.

As with any good narrative, this one went down to the wire. Two pros, each wielding a powerful deck, faced off in one final game.

"The Delver of Secrets deck is a completely different deck if you don't drew any Snapcasters," Denniz remarked as they shuffle.

Paulo chose to play, they drew their seven and they both kept. Paulo played Island and cast Ponder. He reordered the top cards carefully, comparing them to his hand before finally returning them to the top and drawing. Denniz drew, laid a Seachrome Coast and played Delver of Secrets. Paulo Gut Shotted the Delver of Secrets immediately, putting him at 18 life early.

Island and Invisible Stalker came down on Paulo's turn. Denniz Pondered before dropping an Island and a Delver of Secrets. Paulo's turn came and he swung for 1, then dropped a Glacial Fortress and played Geist of Saint Traft. Denniz kept the card, flipped Delver of Secrets, and cast Gitaxian Probe by paying 2 life, thus putting him down to 17. Paulo's hand revealed two Pikes and a Restoration Angel. Denniz played Phantasmal Image to kill the Geist of Saint Traft. The play moved very quickly as the players knew the decks' interplay so well; Denniz took damage in combat and went to 14 with Paulo at 15. 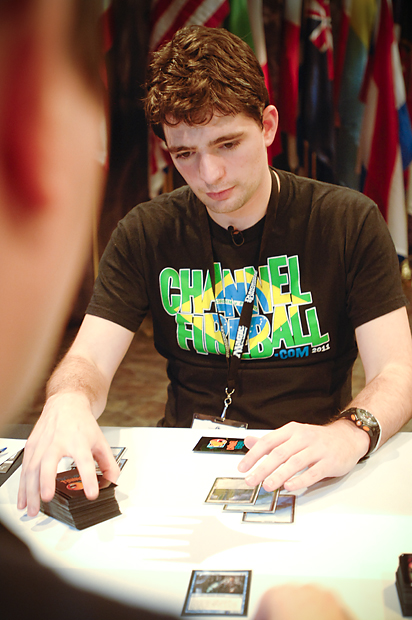 Denniz thought before casting Runechanter's Pike and equipped it on the same turn, leaving him tapped out. He attacked and Gut Shotted Paulo, taking him down to 7 and himself down to 12. Paulo untapped and drew before attacking with his Piked Invisible Stalker, dealing a comparably weak 3 points of damage to Denniz, putting him at 9 life. Paulo played Restoration Angel and passed, taking advantage of a tapped-out Denniz. Denniz untapped, drew, and attacked to be blocked by the Angel. Denniz then cast Divine Offering on Paulo's Pike and went up to 11 life. Paulo offered the hand in concession.