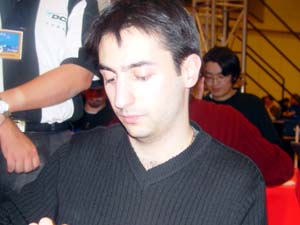 two players have risen to the top table after seven rounds of grueling Mirrodin Block Constructed. Raphael is playing TwelvePost, the breakout deck of the tournament, with four Cloudposts and eight more ways to find them accelerating out gigantic creatures and entwined Tooth and Nails. Kuroda, on the other hand, is running Big Red, a mono-Red control deck filled with burn, artifact hate, and the typical Red creature base at this tournament: Arc-Slogger and Solemn Simulacrum. They are the only undefeated players and are both hoping to finish the day in the same fashion.

As with many of the matchups at the top tables in this event, the game started slowly. Raphael's turn three Sylvan Scrying for Cloudpost was the first spell of the match, although he chose to hold the land for the moment, perhaps fearing land destruction. He played a third Forest instead, and Masashiro had no turn three play.

A fourth forest gave Levy the mana for Solemn Simulacrum, one of the pervasive cards of this tournament. He fetched out a Plains. This was (of course) matched by a Simulacrum from Masashiro's side. Raphael Oxidized the opposing creature and smashed in for two, then played yet another of the card advantage machines and placed his Cloudpost into play.

Kuroda confidently added Arc-Slogger and sent the turn back. Raphael just tapped two for a Talisman of Unity and was done. Not one to wait, Masashiro used his untapped Mountain on end step for a quick two to the head. On his turn, he played the fourth Simulacrum of the game and then passed the turn without attacking, clearly intending to go directly to the dome and deny Levy the extra cards from Simulacrum deaths.

Raphael untapped with eight mana in play, one short of entwining Tooth and Nail. He counted Masashiro's deck, finding that there were thirty-four cards left. He dropped a Stalking Stones and tapped nine. Tooth and Nail gave him a choice between three relevant cards: Leonin Abunas, Platinum Angel, and Darksteel Colossus. He was undecided as to which two to fetch. Eventually he went with the latter two, guessing that his opponent didn't have cheap artifact removal in hand.

Kuroda counted his deck on end step. "Thirty six," Levy helpfully reminded him. Kuroda continued counting anyway and announced, "Thirty four." Raphael nodded and repeated it, jokingly biting his finger in a mock "almost got away with it" gesture.

Kuroda went through the math in his head, eventually apologizing, "Just thinking, sorry." The final decision was to dome Levy three times on end step, taking him to twelve and leaving just four cards left in the Big Red deck.

He untapped and Detonated the Platinum Angel. Wow. Removal of the "can't lose" condition on his opponent and seven to the dome. Levy shook his head, but couldn't prevent the fragments of his fallen Angel from smashing him down to five.

He untapped and ripped his other Platinum Angel off the top. Colossus entered the red zone, taking Kuroda to seven, and the backup Angel entered play. Kuroda looked undeterred, as if he had planned for this all along.

He drew from his depleted library. Two cards left. He confidently tapped six mana and domed Levy with a Fireball for five. That resolved, taking Levy to zero. A Shrapnel Blast followed, knocking the Platinum Angel out of the sky, and the game was his.

Levy was forced to mulligan to begin Game 2. Another slow start followed, with no spells until Levy's turn four Reap and Sow, fetching Cloudpost. On end step, Masashiro hit him with a Pulse of the Forge for four, then untapped and destroyed Cloudpost with Molten Rain, sending his opponent to fourteen.

Levy, with no more lands, could only summon Viridian Shaman. Masashiro had the ubiquitous Solemn Simulacrum, seemingly in control of this game. Raphael then drew another Reap and Sow and cast it, grinning at Kuroda as if daring him to destroy this Cloudpost too. Masashiro played a Talisman, followed by Electrostatic Bolt on the Shaman and an attack for three with Simulacrum and Blinkmoth Nexus.

The top of his deck was again kind to Levy as he found a Simulacrum of his own, fetching a sixth land and bringing him closer to the all-important Tooth and Nail mana. 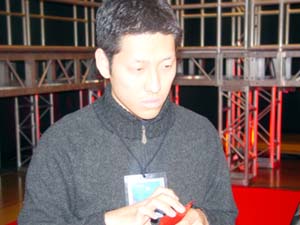 Electrostatic Bolt again took down the blocker and Kuroda's Simulacrum stepped into the red zone. Oxidize removed it and the board was again clear. Levy's mana hungry deck still wasn't geared up as he could only play a Talisman. On end step, Kuroda hit him for four with Pulse of the Forge, then again with another, taking Levy down to three.

He untapped and showed Fireball to put Levy out of his misery.

This is the fourth time Kuroda has managed to go undefeated on day one of a premier event, although in the past Day Two has always gone poorly. Perhaps tomorrow will be his time to shine.