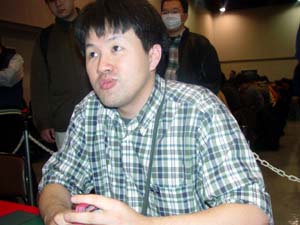 has been on the Asia world tour along with his brother Olivier, and Sam Gomersall. He went to Grand Prix Hong Kong after Pro Tour Kobe, and came back to Japan to play in this event. A win this round will put him in a position where he might play tomorrow, while a win will almost certainly clinch a spot for Okada. Okada pointed out that they had played each other back at Pro Tour Washington D.C., which was a team event. Ruel remembered, but each player argued that he had lost the match, and couldn't quite decide on what the outcome had been.

Okada had a first turn Krark-Clan Shaman, and a second turn Omega Myr. Viridian Longbow followed on turn three, and Ruel played Oxidda Golem, hitting Okada for three damage. The Shaman attacked back for one, and the Longbow went on the Myr. This allowed it to trade with the Golem, and the Shaman died to Barbed Lightning. Okada played a Vulshok Morningstar, but had no creature for the equipment. Ruel's Arcbound Bruiser died to Essence Drain, and Okada played Arcbound Worker. Ruel played Soul Foundry, imprinting Skyhunter Cub with a shrug. "It isn't the best" On end step, the Foundry was destroyed by Shatter, and Ruel wasn't too happy about it. "They always have something for it. Always." He was still able to activate it once before it hit the graveyard, so he wasn't 2-for-1'ed. Okada played a Dross Golem and a Bonesplitter, and Ruel chose to Echoing Ruin the Bonesplitter, then played Leonin Abunas. The Golem's attack brought Ruel to eight, and thanks to Arcbound Hybrid Ruel attacked back to bring Okada to eight as well. The race continued, but Ruel left back the Hybrid on the following attack so he could chump block the Golem. Thanks to Loxodon Mystic and Abunas getting in the way of removing the chump blocker, the game was locked up. 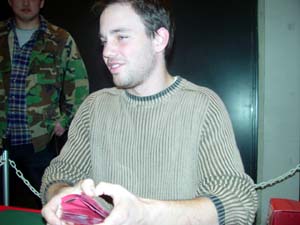 Ruel played Mask of Memory, and Okada had a Longbow and Goblin Archaeologist, which became a threat thanks to Bonesplitter. Ruel had plenty of fast pressure, coming out the gates with Oxidda Golem and Arcbound Hybrid. After getting in one hit each, the Golem died to Echoing Decay and the Hybrid died to Consume Spirit. Ruel now played Wand of the Elements, keeping Okada's Archaeologist back. It blocked a 3/3 Elemental token and tried to get to work destroying artifacts with damage on the stack, but Okada lost the first flip. Ruel seemed to be in a great position to pull ahead with Mask of Memory, but Okada kept wiping out creatures, killing Skyhunter Cub with Essence Drain and Wizard Replica with Betrayal of Flesh. Even Ruel's Raise the Alarm was matched with Needlebug. Still, Okada was running out of resources and Ruel kept building, playing Leonin Abunas. With lots of equipment but no creatures, Okada was helpless to stop the Mask from gaining Ruel a ton of card advantage, and Icy Manipulator ensured that he'd never have a chance to make a comeback.