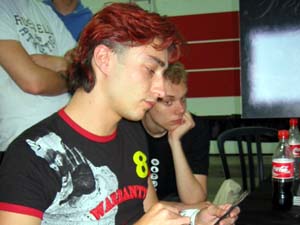 is it. The big one. A full day of Magic, well seven rounds so far, just to earn the right to play this last match. Winner makes day two, loser gets to wander around the tournament site looking for money draft partners for tomorrow.

The French calmly sent back his first hand, due to a severe lack of... lands. The second one was much better but he had to keep it. He played a first turn Pyrite Spellbomb and cycled it looking for a second land. He didn't find it.

Meanwhile Blech was bleeding mana. Two artifact lands and a Prism. Before things got out of hand Peset found a second land and Shattered the Prism. The German went digging with Thirst for Knowledge and Thoughtcast.

Free of any pressure he dropped Ironworks and powered out Myr Incubator before passing the turn. Peset drew his card and shrugged. He couldn't stopped the incoming tokens.

After a lighting-fast, one-side game that took a full six minutes - including the shuffling and mulligan - they grabbed their sideboards and went about their business in absolute silence.

It was Blech's turn to mulligan. They both came out calmly, with Reinhard playing lands and Peset blowing them away. The German did manage to sneak a Thoughtcast through before the French took a break to play Solemn Simulacrum.

A second Toughtcasr left him with a full hand and he used it to play a second land, a second Chrome Mox and a Talisman. Unfazed the French untapped and dropped Furnace Dragon.

The German hardly blinked. He picked up his cards and started shuffling.

Finally the ice broke and they started talking. About their losses so far. Peset thought long and hard about sending back a hand full of mana and a single Solemn Simulacrum. But he kept it.

The German unleashed three Thoughtcasts by the end of his third turn setting up his combo. All the French could do was used Seething Song to power out a turn three Solemn Simulacrum.

Blech surprised the crowd with his next play: Qumulox. At two mana the non-artifact Blue flyer promised to wreck Peset's Dat Two dream. The Qumulox attacked and Peset fired back with Pulse of the Forge.

With his graveyard piling up Reinhard Blech cycled through his deck like a madman. Chromatic Spheres and Thirst for Knowledge kept him churning until he found another Qumulox.

The French hardly blinked. He took another hit from the first Qumulox down to nine and Pulsed Blech to ten. Then he stopped. And thought about it. And decided to tap out to Pulse again. 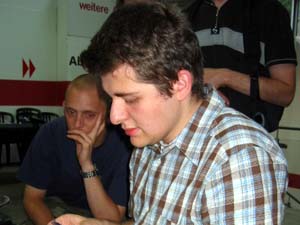 Blech showed him Condescend. Peset untapped and drew. With Day Two on the line they looked at each other with their best poker faces. Thoren brought Blech down to eight.

Alexandre played Seething Song. Blech sat up and considered if he should counter it. He tapped out to play Condescend. The French shook his head. He played another Seething Song and Shattered his own Thoren just to see the next card: Furnace Dragon.