oming into the second day at a disappointing 4-3 Mike Hron and Billy "the hawk" Moreno certainly aren't happy about this pairing. One loss for either of them will put them out of Top 8 contention, but they really won't be that disappointed since rattling off seven straight wins will not be easy in a field such as this.

Billy has drafted a solid blue-black deck with very little removal, while Mike has a white-red deck splashing blue off of three Calciform Pools (which will also help him get to eight mana so that he can play his Scourge of Kher Ridges). 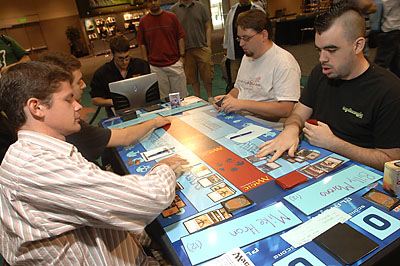 Mike Hron and Billy Moreno are on the bubble, but only one of them can stay there.

Billy won the flip and started the game off with a mulligan, while H-Ron kept his opener. Billy had a turn-two Think Twice, and flashed it back on turn three after Hron played a Spirit en-Dal. Billy had Blightspeaker for turn four, probably not all that exciting without White in his deck. Hron played a Saltfield Recluse, and got in for two on turn four, showing that his deck preferred to play defense. Billy had Magus of the Jar for turn five, and appeared prepared to take advantage of Hron's lack of aggression. Hron got in for another 2 and played a Lucent Liminid on his fifth turn.

Billy untapped and went deep into the tank before playing a sixth land and Haunting Hymning away Hron's last four cards, which included Scourge of Kher Ridges. Hron got in for 5, putting Billy to 11, and played the Essence Sliver he drew. Billy was way ahead on cards, but he needed to find something to stop Hron's evasive creatures. Billy had Leaden fists for the Lucent Liminid on his turn, leaving four mana open to activate his Blightspeaker. Blightspeaker blocked the Essence Sliver and searched up another Blightspeaker, buying Billy time for what he hoped would be a great Magus of the Jar activation.

Billy played Errant Ephemeron on his eighth turn, which should have held off the Essence Sliver, since Hron was empty-handed. Unfortunately for Billy, Hron drew his second Pentarch Ward (the first was discarded to Haunting Hymn), and used it to remove the Leaden Fists from Lucent Liminid. Off of the Pentarch Ward he drew Sinew Sliver, which let the Essence Sliver get through Errant Ephemeron with the help of Hron's Saltfield Recluse. Billy simply chump-blocked with his Blightspeaker and shot Hron down to 21, before he went up to 25 from the Sliver's triggered ability.

On his turn Billy made an odd attack with his Errant Ephemeron, but it was just to get Hron to use his Saltfield Recluse so that he could Big Game Hunter the (Sinew Sliver-pumped) Essence Sliver. The Ephemeron also wouldn't be doing much blocking, since Mike's attackers were a Lucent Liminid with protection from blue and a Spirit en-Dal. Those attackers put Billy to two, before Hron passed the turn. Billy played Festering March to kill the Spirit, and then finally activated his Magus of the Jar in search of an answer to the Lucent Liminid. He missed and packed up his cards.

They each sideboarded in three cards, not a very common occurrence in Limited, although it makes sense since both of their decks are fairly controlling.

Billy chose to play first once again, and they both kept their openers. The first plays of the game were Billy suspending an Errant Ephemeron on turn two, and Infiltrator il-Kor and Corpulent Corpse on turn three. Hron had Calciform Pools on his turn two, which would generally be quite good, but Billy had one of the quicker draws his deck was capable of. He followed up with a rather unexciting Basal Sliver on turn four, although it did gain lifelink on Hron's turn when he played Essence Sliver. Billy's Infiltrator came in on turn five, and he got in for three before playing a 3/3 Primal Plasma.

Hron played a fifth land and contemplated his situation for a little while. The soon to be incoming Errant Ephemeron would certainly be a factor in his decisions. He came up with Griffin Guide on his Essence Sliver, and then went into the tank again about whether or not to attack with it. He finally decided to attack, hoping to race Billy's suspend army with his five-point Drain Life each turn. After combat he Deaded Billy's Basal Sliver so that he couldn't get in on the life gain action. Billy wasn't too disappointed as he was able to get in for a 10-spot with Ephemeron, Infiltrator, and Primal Plasma. This left the life totals at 15 for Billy and 12 for Hron. Billy's post-combat Skirk Ridge Exhumer was decidedly unimpressive. 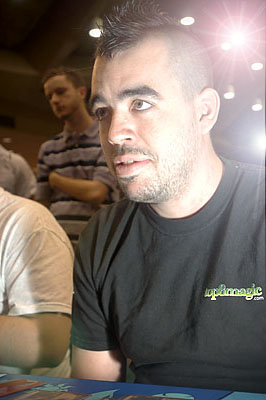 Hron played Marshalling Cry on his turn, which let him drain for 6 with the Essence Sliver and have it back to block Billy's army. After combat Hron Rift Bolted Billy's Infiltrator il-Kor, an interesting decision given that, with Billy at 9, Mike could flashback the Marshalling Cry and attack again, getting Billy to exactly zero with a Rift Bolt to the mohawk if he didn't chump block with the Ephemeron. This play worked out for the better, though, as Billy had Death Rattle on his turn to get rid of the enormous Sliver and leave Mike with just a Griffin token. Billy got in for 7 with Ephemeron and Primal Plasma, leaving the life totals at 11 for Mike and 9 for Billy. Mike attacked for 2 and played a Chronozoa. Billy's Corpulent Corpse came in and he attacked for 10, putting Mike at 1. Mike didn't block because his only hope was that Billy forgot about the Marshalling Cry so that he could flash it back and attack for lethal with his two flyers if Billy didn't play one. Billy did have a flyer though, in the form of Spiketail Drakeling and, Mike simply conceded after he drew and didn't find a removal spell for the Drakeling.

Mike chose to play first for Game 3, and they got started with 25 minutes left on the clock. It should be plenty for these reasonably fast players.

They each suspended a card on their first turn-a Knight of Sursi for Mike, and Corpulent Corpse for Billy. Mike didn't have a play on turn two, but Billy had an Errant Ephemeron on turn two-his best possible draw. On turn three Mike played Skirk Shaman, while Billy suspended another Corpulent Corpse, a card that didn't look like it was going to have any impact on this game since Mike had Empty the Warrens for turn four, which made four Goblins since his Knight of Sursi came into play and attacked Billy to 16 along with the Skirk Shaman. Billy's fourth turn was pretty miserable as he hit Midnight Charm with his Erratic Mutation on the Skirk Shaman, but it wasn't disastrous as he had his other Midnight Charm to finish it off.

Mike kept up the pressure with an Essence Sliver after he attacked for 6, putting Billy to 11. Billy played a Trespasser il-Vec and blocked the Sliver, but took another 6, which put him to 5. Mike then emptied his hand playing a sixth land and two Saltfield Recluses that would leave Billy without good blocks. The Ephemeron and Corpse finally came into play on Billy's turn, and he played a fifth land and passed the turn, representing a trick in order to stop Mike from attacking with his seven creatures to get in 5 damage past his two blockers. Billy drew another card looking for his Festering March, and then conceded to Mike's overwhelming army.