Round 8: ABU2 vs Dynasty 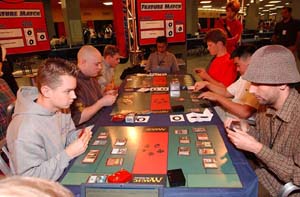 It was obvious from the very first pack that things were going to be different this draft. AlphaBeatUnlimited.com2 win the flip and chose to kick off. Nothing too weird happened when they made their two picks - they did indicate color preferences by putting Ordered Migration (a great card in a base green deck) in the middle while Benalish trapper went to seat C. In the next pick, though, team Dynasty dropped their bombshell: Ben Rubin picked Galina's Knight! That's right, 2/2, protection from red, for a blue and a white. In seat A. The black-red seat. Of course, since everyone drafts black-red in seat A, you could see what Dynasty was thinking. We'll fill our seat A deck with black-red hate and that will more than make up for any Terminates we might have to pass. Besides, if we don't open a Terminate in that one Planeshift pack, our plan is just better. Mike Turian broke the format last year with a similar chain of logic - swapping the Rebel deck into the "wrong" seat in favor of an anti-Rebel deck. Turian's insight got not just his own team (Potato Nation) into the finals but also his friends and roommate (Car Acrobatic Team).

So, needless to say, I was intrigued when Rubin took that Galina's Knight. In addition to Rubin, Dynasty is composed of team draft specialists Gab Tsang and Brian Hacker. Each has a pair of individual Top 8's on his resume, but what each of them really lives for is team draft. They're in their element at 3am, when their bleary eyed opponents are reaching into their wallets. Hacker had barely picked up a Magic card for almost a year, but when team season came around, he was back. And then he was qualified. And in round 8 he was sitting at draft table 3. And a lot of people were surprised, but no one should have been.

ABU-2 stuck to their guns and drafted what the conventional wisdom says are the best decks for their seats. Tokyo Top 8 competitor Philip Freneau got an excellent black-red deck in seat A that was greatly benefited by the fact that he and his teammates opened up Magma Burst, Flametongue Kavu, and Terminate in their three Planeshift packs. Peter Szigeti (who has been hot on the Grand Prix circuit, but yet to break out on the PT itself) sucked down plenty of mana fixers so he can cast all five colors worth of good cards that he got in seat B. And Worlds team champion Brian Hegstad got a tight little blue-white deck that didn't really have a splash color until Apocalypse when he first took Urborg Uprising, then took Anavolver, and then decided that his best splash was red or two copies of Raka Sanctuary. (Dynasty had passed both because they couldn't use them and, more importantly, they didn't think ABU-2 could.)

Dynasty gave Tsang a fairly traditional blue-white-red deck in the middle seat. He took Probe, and fliers, and removal spells (Plague Spitter should be particularly good against Szigeti). Hacker drafted red-black-green in seat C and his deck worked out pretty well with aggression, some burn, and nice Apocalypse cards like Spiritmonger and Ebony Treefolk. His only real problem is the two copies of Raka Sanctuary in Hegstad's deck.

Rubin's deck, however, never really came together. It looked good early when he followed up Galina's Knight with Llanowar Knight, but there just wasn't any more black-red hate available to him. Meanwhile he didn't get any mana fixers, so he could only really run three colors and when he shuffled his random red cards to the back, he was really short on quality playables. He wound up with some real winners in his deck. (Can you say "Falling Timber"? Did you know Ben Rubin could?) 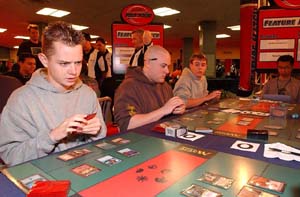 In the end, I'm not sure Dynasty's plan worked out. However, the reasons they're in trouble aren't really their fault and certainly don't have anything to do with their basic strategy. ABU-2 simply opened better cards. I expect Rubin to get slaughtered and Hacker has no really good answers if The Abyss hits play against him.

Of course, anything could happen when they play out the games and maybe Dynasty's plan is even better than I think it is . . .

Freneau seemed to be in control against Rubin from the start. Freneau's Slingshot Goblin enchanted with Foul Presence dominated the board and trapped several of Rubin's creatures in his hand. Then Flametongue Kavu came out. Somehow, Rubin stayed in this game with Sunscape Familiar and Galina's Knight defending on the ground while he served in the air with Gaea's Skyfolk. Even Ben Rubin couldn't pull out game 1, though, and Freneau staked ABU to the early lead.

Game 1 between Hacker and Hegstad was a great one. Hegstad resisted the temptation to slam down Raka Sanctuary early and instead waited until he could leave up Confound. Hacker accurately read him for the Confound and so Hacker didn't go for Dead Ringers right away. Instead he let the Sanctuary pick off an elf while he played out Fires of Yavimaya and Spiritmonger. Hegstad used his Stormscape Apprentice to keep the monger locked down. When Hegstad played Razorfoot Griffin, the Sanctuary was threatening to deal three damage per turn and Hacker had to make his move. "Darigaaz's Charm your Apprentice?" Hegstad thought and then said "Confound it. Land, Dead Ringers?" That's exactly what Hacker did. Hegstad did have another tapper, but he had no blue creatures and Hacker had an Ebony Treefolk to attack with. Hacker threw another uppercut - Orim's Thunder targeting the Sanctuary and the Benalish Trapper. Hegstad dodged and return with a devastating combination: Rushing River my Trapper and your Spiritmonger as a response. In the end, Hegstad's Trapper bought him the time he needed to attack for the kill with Angelfire Crusader. Hegstad breathed a sigh of relief at the end - "I was so scared you were just going to Ghitu Fire me out" - but Hacker failed to draw his punk-out bomb and Hegstad claimed game 1.

Tsang was the aggressor early and throughout his first game against Szigeti. Whirlpool Drake and Hunting Drake made for an impressive air force, but Szigeti fought back with Stratadon, then Armadillo Cloak on an Urborg Elf. Tsang dealt with both of them, but then Szigeti played Ordered Migration for 5. He was too low of life, though, and Tsang claimed game 1. Szigeti evened things up quickly with an early Cloak and a fast Migration (for 4).

Hegstad and Hacker each mulliganed down to 6 before their second game. Hacker had an early Ebony Treefolk while Hegstad tried to look depressed about not having any white mana. He turned to watch his teammates play on Hacker's next turn when what he really wanted Hacker to do was play a spell he could counter with Suffocating Blast. Hacker didn't fall for Hegstad's trap. He pumped his Treefolk and left an elf and a Slingshot Goblin sitting in his hand. Hegstad was forced to start tapping out for creatures, but Hacker removed Gerrard with a Ghitu Fire and continued to apply pressure. Hegstad dropped a Haunted Angel, but Hacker had Sunscape Battlemage ready to destroy it and suddenly the match was all tied at 1. Hacker never gave Hegstad a chance to play that Suffocating Blast and I couldn't help but wonder if Hegstad's attempt to look helpless had been transparent to the veteran poker player Hacker. 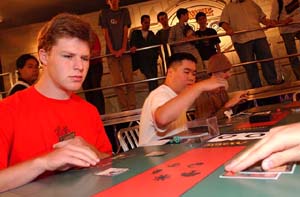 Rubin also managed to even his match at a game apiece so all three came down to game 3.

Meanwhile Hacker played some Elves and a Slingshot Goblin while Hegstad sat staring at a hand of Raka Sanctuary, Raka Sanctuary, Suffocating Blast, but no red mana. Hegstad's Trapper slowed the beats for a few turns, but Hacker drew Darigaaz's Charm and dispatched the Trapper post haste. Next Hacker drew two with his Sunscape Battlemage and added another elf to his team. This time, Hegstad's helpless look was no bluff and Dynasty had a 1-0 lead in the overall team match.

Tsang came out slugging with a turn 3 Lava Zombie and then Plague Spitter. Szigeti answered the Spitter with Lashknife Barrier but that zombie was hitting hard. Soon Szigeti was in chump block mode and an inevitable slide toward a Tsang victory had begun.

High fives were exchanged on one side while Hegstad turned to Szigeti and moaned "I could have sworn we had better decks than them." They did, and Dynasty knew it, but Dynasty pulled off the upset with a little bit of luck and a lot of quality play. Freneau did managed to beat Rubin, but just barely in a tight third game.