Round 8: Adam Horvath vs. Shawn Regnier 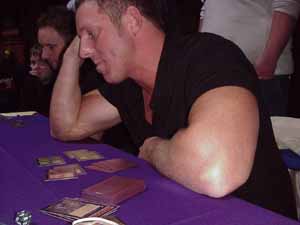 Shawn “Hammer” Regnier is a fan-favorite. That might be due to his menacing appearance. No-one mentions his name without talking about his history as a pro arm-wrestler, and he’s still got the guns to attest to the fact. He keeps insisting that he’s leaving the game for good, but time and again he shows up for one more run. This time it’s a good one. He’s 7-0 and looking like a lock for Day 2. Opposite him is one of the unsung members of TOGIT: Adam Horvath. The reigning New Jersey State Champion has some lettered supporters, and his performance thusfar corroborates their stories. Of course, Teammate Osyp Lebedowicz couldn’t let that praise go to Horvath’s head, so he spent the round mercilessly taunting him.

Horvath came off the blocks with Goblin Turncoat on turn two, and all three colors of mana on turn three. However, he didn’t have a play to go with it. Regnier made a morph and passed it back. Horvath hit for two more before showing Sparksmith. Better late than never. With no solution to that particular problem, Regnier attacked and then sat on his four mana.

Horvath added Skirk Outrider and shot down the morph. It was Tribal Forcemage. Regnier cycled Hundroog and finally found what he was looking for. Shock took down the ‘Smith, and Timberwatch Elf got ready to dominate the board. Horvath played his sixth land and passed it back. Regnier was still stuck on four lands. He added Goblin Sharpshooter. Horvath went one better.

Enormous Baloth hit play, turning on Skirk Outrider in addition to providing a ridiculous body. Regnier let the Outrider through, falling to six. He made a morph and gave it back. Crown of Suspicion took out his Sharpshooter and the Baloth swung in. The morph, Skinthinner, took one for the team. Cursing the deck check for sabotaging his mana, Regnier made the best defense he could. This time it was Stonewood Invoker and another morph. Horvath’s men charged. Reginer lost his morph and Timberwatch Elf taking the huge beast down, but Horvath calmly showed him Kilnmouth Dragon, and that was the game. 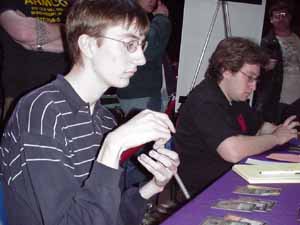 As so often happens, the game didn’t really get going until the third turn, with Regnier’s morph staring down Horvath’s Smokespew Invoker. Crown of Suspicion cleared the path, and Horvath replaced it with a morph, showing that he was stuck on three lands. They traded hits. Regnier had no play on five mana. Horvath made another morph. Shock dispatched it. Finally Regnier had another morph.

It was gripping drama. Horvath made yet another Gray Ogre. Regnier attacked into a double-block. The unblocked morph was revealed to be Haunted Cadaver. Horvath was left with just a morph and one card in hand after discarding a mittful of red cards. Blackmail stripped it, and it was Noxious Ghoul. He ripped mountain to turn over his Shaleskin Plower for Regnier’s lone mountain.

That was nothing. Regnier made a morph, only to watch Horvath pull Cruel Revival off the top, getting back his Ghoul. Regnier was apoplectic. After various exclamations about the fickleness of fortune, Regnier pulled Stonewood Invoker off the top, with seven land in play. Horvath continued to make dudes. Regnier drew lands. Facing a board of four creatures he emptied his hand of Wirewood Elf and Lavamancer's Skill on the Invoker.

Horvath swarmed him. The Elf chumped the Plower and the Invoker finished the job. Regnier stood at five. Horvath added a morph. Regnier ripped Ravenous Baloth right off the top. Suddenly his talk of topdecks was being forced back in his face. Next he pulled Spitting Gourna, conveniently a beast. Horvath had Enormous Baltoh, but Regnier just pulled up Goblin Sharpshooter.

With time running out, Regnier dismantled Horvath’s board. His last gasp was Butcher Orgg, just as Regnier had tapped five for Centaur Glade with eight mana remaining.

“What’s that guy do? [speeds through Butcher Orgg’s text] And you’re at four? Well, I’m still feeling good about my chances.” – Shawn Regnier

Sure enough, he found the play to make two guys and massacre Horvath.