Round 8: That Ain't Natural

"Thanks, you too. It's a pretty good start to a Pro Tour right? I'd probably take 7-1 if someone offered it to me at the start of the day."

Patrick Chapin was uncompromising in his search for a perfect record, while his opponent, Ben Stark, was perhaps a little more philosophical about the happy situation the two American pros had found themselves in.

"There's a list of ten drafters that when they tell me the opposite of what I think is true, I find that I was wrong and learn something new," said Chapin. "Ben is definitely on it, along with Gabe Walls, William Jensen, Eric Froehlich, Richie Hoaen, and Kenji Tsumura amongst others."

Chapin continued with the high praise, stating that before about 2007, he really didn't see himself as much of a Limited player. This would be an interesting match.

Both players kept, and Stark led with a Signal Pest. He followed up with Ichorclaw Myr, threatening a slightly faster poison clock. When he followed with Vector Asp and Infiltration Lens before Chapin had even played a third land, it seemed that the preamble could end up longer than the game. Chapin's red-blue deck had a plan against green-black infect, though. He cast a Blisterstick Shaman to off Ichorclaw Myr, and the next turn had an Oxidda Scrapmelter for Infiltration Lens, leaving Stark's board suddenly unimpressive.

Ben played a Tumble Magnet and passed, now unwilling to attack. The Tumble Magnet held off Scrapmelter, leading Chapin to get stuck in for just 2 points, before playing Ferrovore and Oculus. Having taken four poison early, Chapin appeared to be right back in the game. 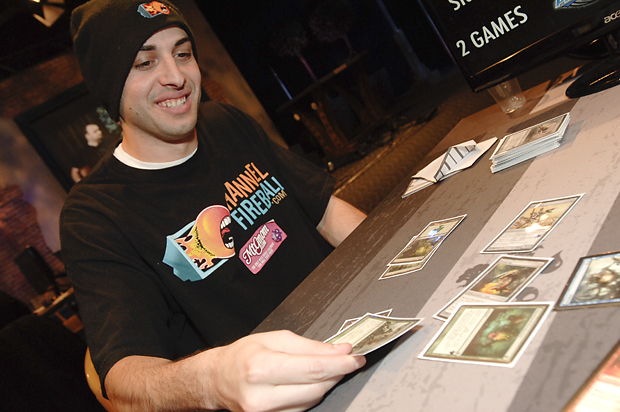 Ben Stark squeaks out a win with double pump spells.

Appearances can be deceiving, though. Stark swung in with Vector Asp and Signal Pest, and when Oculus stood in the way, he unleashed first Unnatural Predation and then Mirran Mettle, to get in for exactly the 6 points of infect damage he needed.

"I hate playing against smart people. It's so much easier when I play against people who mindlessly choose to play every single time."

Stark and Chapin are among the players most apt to question the conventional wisdom of always playing first when given the option. Even in Constructed at events like Pro Tour Hawaii, Stark identified that being on the draw was correct for his deck, and wished that he'd done so even more.

The second game, on the play, Stark had a slightly ropier draw. With only Forests for the first four turns, his Moriok Replica and Vector Asp seemed a little ineffective. A Trigon of Infestation looked good while it was briefly in play, but Oxidda Scrapmelter from Chapin was quick to off the token generator.

Chapin had a Neurok Replica alongside his Scrapmelter, which quickly fell to Sylvok Replica while Chapin was tapped out. Chapin replaced it with Ferrovore and passed. Stark was now up to six lands, but each was Forest, and he could only nod as he saw an Argent Sphinx from Chapin. At end of turn, Stark played Carrion Call. He'd already shown some combat tricks, but it seemed unlikely that Chapin was in immediate danger. When Stark tried for a Corpse Cur, it was stopped by Steel Sabotage, and Chapin's Game 2 victory seemed all but complete. While it would take a few turns for the Sphinx to end the game, Stark's deck seemed to lack the power it had shown in Game 1.

"Better lucky than good," remarked Patrick, of his good fortune in Game 2.

"Well, I had a nuts draw in Game 1, which means it probably balances out."

"This can't be good," remarked Stark sagely. When Chapin cast Volition Reins on Stark's only flyer, it seemed that Ben was correct in his assertion. He scooped up his cards.

With the option for the game that would decide which of the pair would be undefeated on Friday morning, Stark elected to draw.

The first play of the game was a turn-three Oculus from Chapin, before he used Steel Sabotage to stop a Phyrexian Digester. The little 1/1 got stuck in, and Chapin again had the counter, this time a Stoic Rebuttal, to stop Carrion Call. Stark cycled a Tel-Jilad Defiance, but had no more plays. He wasn't under a quick clock, but equally he wasn't presenting one.

After a little thought, Stark cast a Liquimetal Coating, and used it targeting Chapin's only Mountain. He then cast a Viridian Corrupter to off the land. The Corrupter fell to Burn the Impure in response, but Stark didn't seem to mind. He cast a Flesh-Eater Imp the following turn, and looked to get back in the game.

A Halt Order from Chapin stopped Sylvok Replica, but it seemed that this game the Liquimetal Coating could prove decisive, as Chapin, with all his card drawing, could not find another Mountain. Stark's Imp attacked for two poison, then another two before Chapin finally drew some sort of an answer in Argent Sphinx.

Stark went deep into thought, then proclaimed that in point of fact, he really didn't need to be thinking so hard. He attacked, and Unnatural Predation followed by Untamed Might sealed things in decisive fashion. 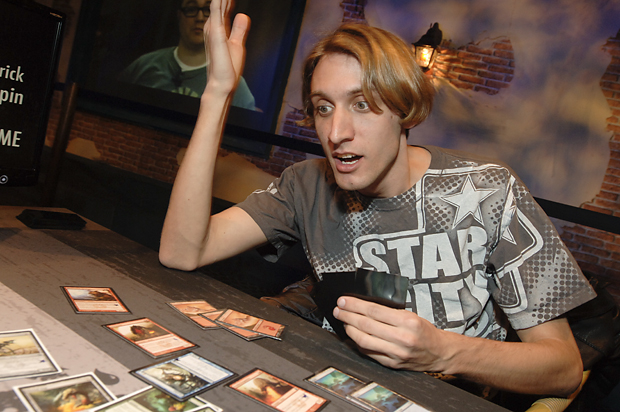 Patrick Chapin reacts as Ben squeaks out another win ... with double pump spells.

Chapin extended his hand. He would have to settle for 7-1.