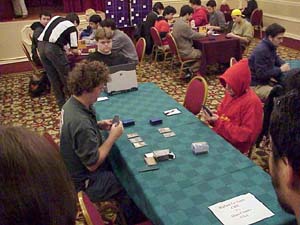 The first round of the day featured two very respected players within their countries - Alan Comer, from the United States, is fresh off of his 2nd Place finish at Pro Tour Barcelona, and Rafael is widely considered to be the best player in Chile, with Grand Prix Top 8s in Rio de Janeiro and Buenos Aires. Both players were 6-1 going into this round.

Comer won the die roll, and elected to play first. Comer brought his Blue/White/Red creatureless control deck to the tournament, which wins off of either Urza's Rage or Goblin Trenches, while Le Saux was playing a Blue/Red/Black Mexican Turbo-Lobotomy deck, which includes 4 Lobotomies and 3 Blazing Specters in addition to the usual compliment of Black, Blue, and Red cards such as Fire/Ice, Fact or Fiction, and Undermine. 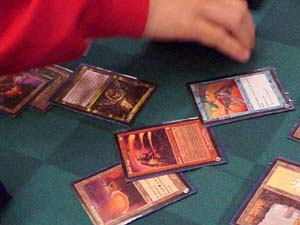 As both players were playing control decks, the first few turns were rather uneventful. The first spell to be cast was an Ice during Rafael's 3rd turn end step targeting a Salt Marsh, to which Rafael responded with a Recoil on Comer's Coastal Tower. Comer replayed the Coastal Tower, and during Rafael's next upkeep, again attempted to Ice Rafael's land, to which Rafael responded with another Recoil on Comer's land, and soon after Rafael had 4 lands to Comer's 2. Comer replayed his Coastal Tower for the 3rd time on his next turn, and the game of draw-go continued. During Comer's end step, Rafael attempted to cast a Fact or Fiction, which was Absorbed, but Rafael was just fine with that, untapping and casting a Lobotomy on Comer. He had a choice between Urza's Rage, Repulse, and 2 Fact or Fictions. He chose to take the 2 Fact or Fictions, significantly crippling not only Comer's hand with a 2 for 1, but also crippling Comer's deck by taking out the 4 card drawing spells.

All Comer could do was untap, play a land, and say go, as he watched helplessly as Rafael cast a Void. Comer responded by Urza's Raging Rafael, but the damage had already been done. Rafael had 5 cards in his hand to Comer's 1 card, which both players knew was a land from the Void. Rafael eventually cast a Yawgmoth's Agenda, followed on the next turn by a Blazing Specter, which Comer Excluded, and off the Exclude Comer drew a Goblin Trenches and had an Evasive Action for Rafael's Recoil. For a moment it seemed like Comer might be back in the game, but a Crosis from Rafael ended those dreams as Comer could not overcome Crosis and Rafael's Yawgmoth's Agenda.

Both players took out their relatively useless cards such as Fire/Ice, Exclude, and Repulse with Comer bringing in Aura Blasts and Gainsays and Rafael bringing in Gainsays, Disrupts, and Plague Spitters. 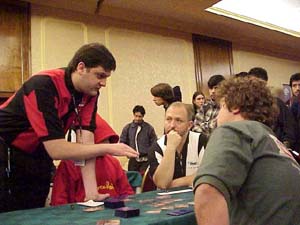 Comer chose to play first for the second game, and had to paris his first hand. Rafael cast the first spell of the game, a Nightscape Familiar, on Turn 2, which Comer Urza's Raged on his Turn 3. At the end of Rafael's 4th turn, Comer attempted to cast a Fact or Fiction, but Rafael had a Gainsay. At the end of Rafael's 5th turn, Comer attempted to cast a Prophetic Bolt, but Rafael had an Undermine for that. On Comer's end step, Rafael tried to cast a Fact or Fiction, which was Gainsayed, but Rafael had no problem with this as he was able to untap and play a Lobotomy. Comer cast Urza's Rage in response, preventing Rafael from taking all of those out of his deck, but this left Comer with no cards in his hand to Rafael's 4; however, this wasn't the end for Alan Comer, who drew a Trenches from the top of his deck, and began sacrificing land to make tokens. Rafael had 2 Recoils in his hand, and since Comer only had 1 card in his hand, was able to make Comer discard the Goblin Trenches with a Recoil on a token and a Recoil on the Trenches. While Comer was able to get in about 6 points of damage with the 3 remaining tokens, Rafael eventually drew an answer in the form of a Void for 0, killing off the tokens. Comer, however, drew another Trenches off the top, and Rafael didn't have a counterspell for it. Comer continued to sacrifice his lands to make tokens, and Rafael, holding only an Urza's Rage in hand, conceded to the mass of Goblin tokens.

Rafael chose to play first for the final game, and neither player had to Paris mulligan. Rafael cast the first spell on Turn 3, a Plague Spitter, and since Alan only had an Island and a Coastal Tower out, was not able to counter it. The clock had begun. During Alan's next end step, Rafael attempted to cast a Recoil on Alan's Coastal Tower, but Alan had a Gainsay. Again, however, Rafael was just fine with his end of turn spells being countered, as he cast a Void 3, getting Comer's Absorb and Urza's Rage; however, he was unaware that this would also kill his Plague Spitter, and the mistake was not caught until a few turns later, at which point the Head Judge, Ceriotti, decided to award Le Saux a Game Loss because the game could not be reconstructed as it was before the accident.