Round 8: Alex Alford vs. Thomas Haver 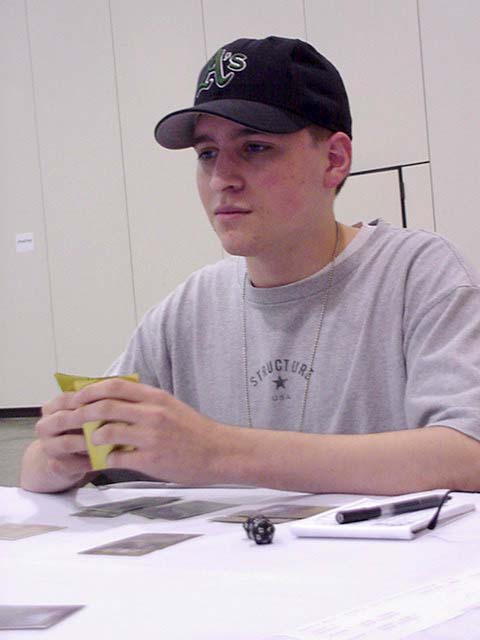 Alex Alford is the owner of the 7Towers card store in Danville, Kentucky. The website of the store (7towers.net) has been gaining a following lately, with writers such as Joshua "X" Claytor and "The Joker". He is playing a Dark Fires deck, with Spiritmongers and Deeds. His opponent Thomas is running a typical Fires deck, but with the Apocalypse addition of Fire/Ice.

Thomas accidentally looked at his hand before deciding whether to play or draw, and the judge ruled that the play/draw decision would go to Alex. A first turn elf was played on both sides, and Alex cast Pernicious Deed on turn two. This left Thomas' Elf free to attack for a turn, and he played a second. Alex untapped and thought, and blew up the Deed for one, killing off two of Thomas' Elves, and one of his own. He then summoned an Elf, while Thomas rebuilt with Birds of Paradise. Things started to get ugly on the next turn, as Alex summoned Spiritmonger.

Thunderscape Battlemage was played with black kicker on Thomas' turn, forcing Alex to lose his two card hand of Deed and Spiritmonger. Still, he had a Spiritmonger on the table, and it attacked for six damage. Thomas tried to build up his board position, playing Blastoderm. Urza's Rage was used to kill off the Battlemage, and Spiritmonger came in for six more damage. Thomas tapped on his deck and drew, and apparently it worked. Thomas asked to make sure that Alex had no black mana sources available, and killed off Spiritmonger with Ghitu Fire. Blastoderm then attacked for five damage as Thomas began his comeback.

Alex attacked back with two Elves, and Thomas swung back with the Blastoderm, putting each player at six life points. Shivan Wurm was summoned by Alex, allowing him to hold off the Blastoderm. To make things worse for Thomas, the 'Derm was had no counters left. It attacked, and was blocked by Shivan Wurm. Fire finished off the 7/7 trampling beast. Fires of Yavimaya showed up on Thomas' side, but Alex had Ghitu Fire to take the game. 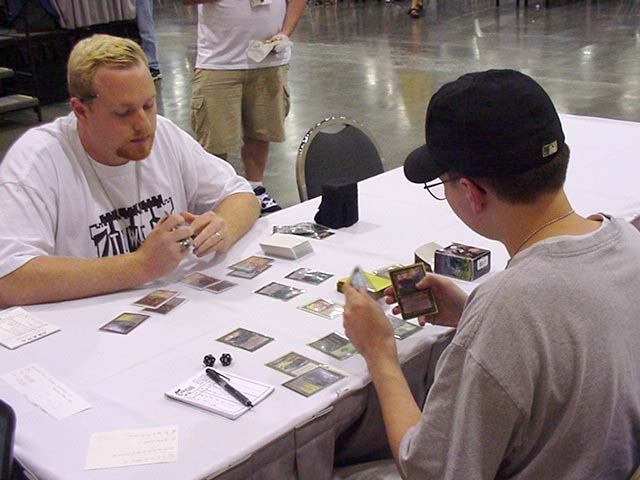 This game, Thomas boldly stated "I will play!", resulting in some friendly discussion about Thomas' mistake in the first game. Thomas did not have a first turn play, but Alex opened strong with a Llanowar Elf. However, Thomas had the answer as he killed off the Elf with Fire. Alex now played Rishadan Port, and used it on Thomas' upkeep. Fires of Yavimaya showed up on Alex's side on the following turn, and Thomas summoned Blastoderm. Alex then summoned his own Blastoderm and sent it into the Red Zone, and Thomas was quick to block and trade.

A second Blastoderm showed up on Thomas's side, and Alex answered back with his own, and yet again they traded in combat. Thomas played his own Fires to make the board nearly symmetrical, and commented "I guess this leaves me wide open for that Spiritmonger attack!" Alex didn't have a fattie to play, and he simply used his Port on Thomas's upkeep. The fatties were nowhere to be seen on Thomas' side of the table either, but he did send a Llanowar Elf into an attack. Alex then played a Deed as an insurance policy, and used it on Thomas' attack to kill of the Elf.

Alex finally dug into a fattie, and it was a big one: Spiritmonger. Rather than attacking, Alex decided to hold it back, since he was at a fragile seven life points. Thomas had the answer in Terminate, and continued his Llanowar Elf beatings. A Deed showed up on Alex's side, and he ended his turn. Alex was at four, and the Elf attacked. Fires of Yavimaya was sacrificed to make it bigger, and Alex responded by sacrificing the Deed for one before damage went on the stack. Thomas then played another Fires before ending his turn.

Birds of Paradise was now summoned by Alex, who went down to two life points thanks to one of his pain lands (he did not see a single basic land the whole game). He played a Shivan Wurm and went all out, attacking for seven damage. This was a gamble, because if Thomas had drawn any creature, it would have attacked for enough damage to win the game. However, this was irrelevant, as Thomas simply used Fire to deal the final points of damage. 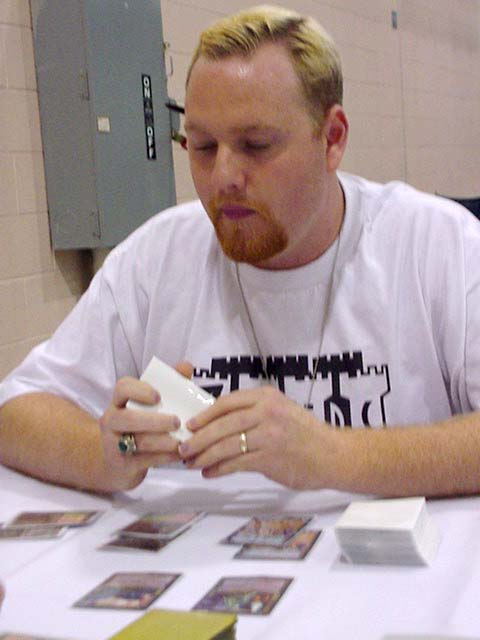 Alex went first this game, and Thomas mulliganed his opening hand. A second turn Birds of Paradise was summoned by Alex, and Thomas played a Port, which was used to tap down Sulfurous Springs on upkeep. The Bird was used to summon Llanowar Elves, and Alex ended his turn. Thomas tapped on his deck and drew. He then played Karplusan Forest and cast Fire, taking out the Bird and Elf on Alex's side of the table. This didn't stop Alex's board development much, as he summoned Blastoderm. It attacked for five on the following turn, and Thomas played Llanowar Elves, commenting "There's some chumpage". On end step, Alex used Fire to deal one to the Elf and one to Thomas.

This cleared the way for another Blastoderm attack, which was followed by Pernicious Deed. Thomas played his own Blastoderm, and Alex attacked, prompting Thomas to block and trade. A Thunderscape Battlemage was played with green kicker by Thomas to eliminate the Deed, and Alex responded by sacrificing it for three to eliminate the Battlemage. A second Battlemage then showed up on Thomas's side without kicker, and was killed off with Terminate.

Nothing happened for a few turns, and Thomas commented "I may end up regretting this . . . " as he played Spiritmonger and tapped out to use his Port. Alex had the answer in Terminate, but still could not find a threat of his own to finish off the job he had started in the early game. In fact, Thomas could not draw a threat either, commenting "Wow, this is really action packed right here".

It seemed that the game would come down to topdecking, and Alex got a step ahead by drawing a Blastoderm. The 5/5 beast attacked on the next turn, but not before Fire was used to clear the Bird out of the way. This brought Thomas to two life points. He drew and showed a hand filled with targeted removal, conceding the game.