Round 8: Alex Shvartsman vs. Kelvin Hoon 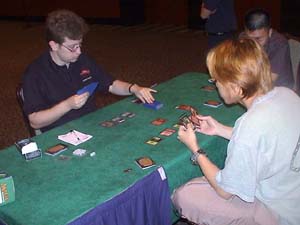 Magic Invitationalist Alex Shvartsman's Blue/Black deck has so much bounce it could suck the life out of a basketball. His deck contains FOUR Aether Bursts and a Churning Eddy. Other highlights include Cephalid Broker and a couple of Dreamwinders. He expects to go 2-1.

Singapore's Kelvin Hoon is flying high. His deck is a Mongrel short of being the textbook example of a great R/G deck. It has Call of the Herd, Beast Attack, two Chainflingers, Arrogant Wurm and Shower of Coals. He predict's he'll go 3-0. Unfortunately, that much token generation is going to get savaged by Shvartsman's bounce.

For Game 1 Alex kept a hand that had creature removal and a Dusk Imp. Hoon kept one with no red mana but has Chatter of the Squirrel and Call of the Herd.

Some Chattering occured for the first two turns. Alex mercilessly despatched one of them by casting Innocent Blood. On the third turn, the Chattering stopped and the trumpeting began. An elephant token answered the Call but it was short-lived - Aether Burst sent it away.

Shvartsman played Dusk Imp on his third turn. Kelvin chose not to call for another elephant and instead played out an Ember Beast. This was a wise decision as Alex had another Burst (surprise, surprise) clearing Kelvin's board. The Dusk Imp started serving, and Alex fortified the ground by playing Dreamwinder.

On Hoon's turn it was obviously not in his interest to replay the Beast, so he tapped out for Chainflinger instead - threatening to take down Alex's Dusk Imp. This was not to be. Shvartsman ensured the Chainflinger met a Ghastly Demise, and sent in the Imp and Dreamwinder, sacrificing an Island to deal six points of damage, bringing Hoon to nine. The remaining card in his hand was Churning Eddy, which was perfect for the situation as Hoon had a Call in the graveyard and had seemingly run out of cheap plays.

Now, Alex's Dusk Imp had done six points of damage to Kelvin, and that was six points too many. On Kelvin's turn he Engulfed the Imp in Flames and burnt it too a crisp. More trumpeting occured and an elephnt token ansered the Call. Alex replied by playing a Dirty Wererat, patiently awaiting the opportunity to maximise his Eddy.

It was unfortunate that Kelvin had no good response to the Rat. He passed the turn and his board was looking rather sad with only the elephant on his side, while Alex could potentially have eight power on the table, as Alex drew ever closer to achieving Threshold. 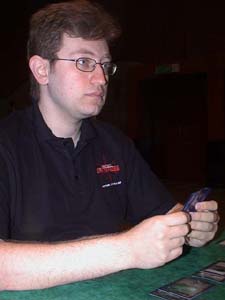 And so Threshold was achieved on Alex's turn, when he played Churning Eddy to clear the way for his attackers, sacrificing his last Island to drive the Dreamwinder and pump the Wererat. Hoon was down to one. Despite playing several chump blockers he eventually succumbed to the Wererat.

Game 2 started exactly as Game 1. The Chattering of a cute and furry squirrel was cut short by the slaughter of Innocent Blood. The squirrel did not return immediately however and instead a Mad Dog was brought to the table. Squirrels, dogs, elephants and beasts. What a riot! Anyhow, Alex did not have a reply for the Dog and it bit him the next turn. Kelvin brought the squirrel back and once again the chattering was cut short by Aether Burst. He also played Diligent Farmhand.

Alex made a Filthy Cur and passed. Hoon swung w/ the Dog and Farmhand - which was promptly blocked by the Cur. The Farmhand made Kelvin a Mountain, and Kelvin used his other untapped land to cast Engulfing Flames, finishing off the Cur. Alex was brought to 14.

The Dog was still on the loose and had to be stopped. Alex played a Dreamwinder to eat the Dog when it came its way next turn. The Dog got eaten, and its master avenged the loss of his misguided pet by flashing back Engulfing Flames to end the Dreamwinder. The board was clear. What would happen now?

Alex casually cast Cephalid Broker. Kelvin replied with Arrogant Wurm. The Broker made some trades, and gave Alex removal in Crippling Fatigue. An Island and a Dematerialise were discarded. He now had six cards in his graveyard. Alex had a cunning plan. His cunning plan was to play Dirty Wererat and win. He played the Dirty Wererat. 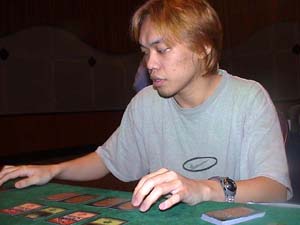 Hoon swung with his Arrogant Wurm, not realising that Alex could achieve threshold after blocking with the Rat to overpower the stuck up animal. Perhaps the Wurm should have been more humble. This writer thinks that Kelvin should have enchanted the Wurm with Seton's Desire which he was holding, as two bounce spells had just been used/discarded. The Desire remained unused for the rest of the game.
After making this unfortunate error, Hoon Called for an elephant token. On Alex's turn he employed the Broker's services once again, and discarded the Fatigue and Innocent Blood. He held Dreamwinder and a second Aether Burst. The Wererat attacked, and Alex passed the turn. Hoon was holding Temporary Insanity, and did not cast anything on his turn in order to leave up mana to play it when Alex attacked with the Rat. This was a reasonable plan, but not as cunning as Alex's. Kelvin's attempt to be rid of the Broker was thwarted by Alex's second Aether Burst, sending away the elephant token and returning the Broker to the safety of Alex's hand. The Wererat made it through for some more damage. The Broker was replayed.

Hoon cast Anarchist to chump the Wererat, and brought the Call back to his hand. It did its job, but Alex dropped the elbow by Brokering for the third time, and playing Organ Grinder! Meanwhile, the cunning plan progressed, and the Wererat had already smashed Hoon for twelve. Hoon tapped out for Chainflinger, but it was useless - Fatigue was flashed back. When Alex played Aven Fisher Hoon needed to draw Shower of Coals to survive for another turn. The Shower of Coals didn't show and Hoon conceded.