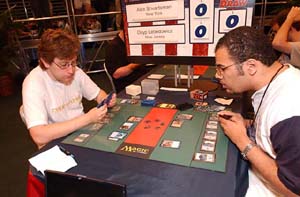 Alex sat down and mentioned that he's 3-0 against Team TOGIT this weekend. Osyp is the most notable member of the team, having a breakout year with a Top 8 finish at Pro Tour Osaka. Both players live in the same area, with Alex living in New York, and Osyp hailing from New Jersey. To be fair, Alex is more of a global citizen than a New Yorker, since he is by far the most well traveled Magic player in history.

Osyp cast Mental Note, milling off Crippling Fatigue. A few turns later he cast Peek, looking at Alex's un-curved hand of Innocent Blood, Morgue Theft, Balshan Collaborator, Pardic Collaborator, Churning Eddy and Dirty Wererat. Osyp played four islands and had nothing to cast, while Alex brought out the Wererat. Osyp then summoned Aven Fogbringer, bouncing one of Alex's lands. Alex now had to think hard about what to play, since Osyp had Crippling Fatigue waiting in his graveyard to kill a creature. Still, Osyp had all islands on the table. Alex brought out Balshan Collaborator, and Osyp played a swamp, and used Fatigue to kill it. "I knew you had the swamp. There was no doubt in my mind." 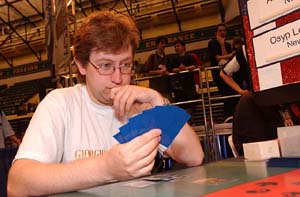 Osyp summoned Wormfang Drake, hiding the Fogbringer. Alex answered back with Escape Artist and Innocent Blood, killing off Osyp's Drake and bringing back the Fogbringer. Morgue Theft also brought back the Collaborator. Osyp came back, playing Psychatog and enchanting it with Ghostly Wings. Alex had Churning Eddy to make the 'Tog lose its wings, and Osyp summoned Zombie Assassin. The Collaborator was cast, and Osyp brought Psychatog back out along with Hapless Researcher. Balshan Collaborator attacked and was chump blocked by the Fogbringer. Wormfang Turtle built up Alex's defenses a bit more. Osyp did not attack back, leaving his team ready to block. The Collaborator attacked, and was killed off by Zombie Assassin. Morgue Theft was flashed back, but Osyp responded with Grip of Amnesia, which countered the would-be Raise Dead.

A second Fogbringer brought an island back to Alex's hand. The Wererat was chump blocked by the Researcher, which was sacrificed. Osyp discarded a Crippling Fatigue. Alex summoned a pair of Treacherous Vampires, but Osyp summoned Iridescent Angel. Wormfang Behemoth then showed up on Alex's side. Iridescent Angel now hit the Red Zone, and Alex attacked back with his whole team, casting Keep Watch to draw four cards. Alex showed me his hand after Keep Watch resolved, which contained Turbulent Dreams, but not the second island he needed to cast it and stay in the game. 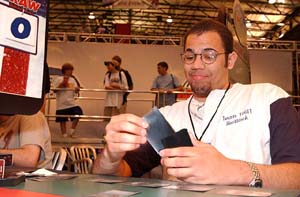 Osyp mulliganed his opening hand. Alex summoned Treacherous Werewolf, while Osyp kept up with his own Gray Ogre in Gravegouger. The Werewolf attacked and traded, and Alex built up his air force with Balshan Collaborator and Aven Fisher. A Zombie Assassin improved Alex's board position, and Osyp summoned an unimpressive Mirror Wall. Alex applied even more pressure with Wormfang Behemoth. Osyp finally brought out a flyer to slow things down in Aven Fogbringer, but it wasn't enough.

Osyp summoned a turn two Phantom Whelp, followed by a turn three Wormfang Drake. It attacked on the following turn, and was joined by Hapless Researcher. Alex cast Cephalid Broker, but Osyp slowed him down a bit with a Fogbringer. Pardic Collaborator allowed Alex to own the ground, but there was still the matter of the five points of flying damage coming over every turn. Yet another Aven Fogbringer set back Alex once again, providing Osyp with a tremendous amount of tempo advantage. Ghostly Wings enchanted the Researcher, allowing Osyp's team to fly over for the win.