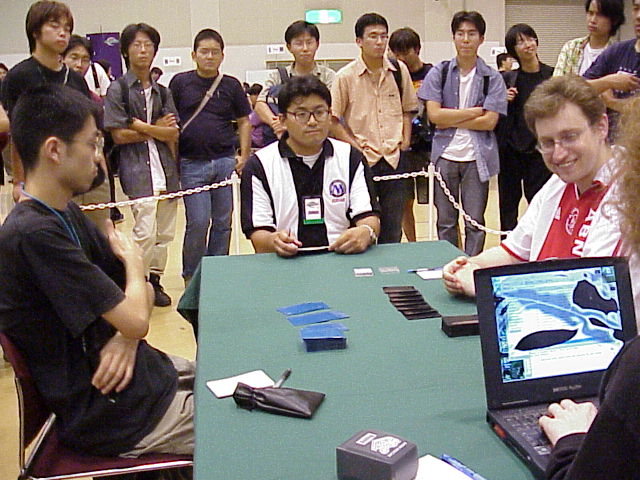 Asian Grand Prix fixture Alex Shvartsman was dressed to the nines for his run at Grand Prix -- Kobe, wearing a soccer jersey with his name emblazoned on the back. He'd followed up his three byes with a pair of losses, putting him on the bubble and forcing him to win out. He rose to the challenge, and found himself opposite Takuichi Harino in the eighth round. Harino himself made Top 8 at Grand Prix -- Kyushu.

Shvartsman won the die roll, but missed his third land drop without putting a creature into play, a result of his being without green mana. Harino made an early Mongoose and started to bring the pain. Shvartsman was knocked to fourteen before he found a forest and used it to power out a Fact or Fiction.

The split was three lands versus two spells. Shvartsman said "It's a deal.", grabbing the lands. He untapped, dropped a Mongoose and discarded an island. Harino Opted, and his wealth of land was proving a disadvantage now that Shvartsman's game was kicking into high gear.

Harino held on, Prohibiting Shvartsman's Skyfolk and bringing a Fact or Fiction of his own that netted him Absorb and Prohibit over Absorb and land. The Mongeese (or possibly "polygoose") traded. Harino even managed to block a kicked Kavu Titan with Mystic Snake.

Shvartsman drew out counters with a pair of Repulses on the Mystic Snake. Shvartsman untapped and went for a kicked Kavu Titan. Harino Excluded, and Shvartsman Excluded back to prevent Harino getting too far ahead. It was an uphill battle. Harino took down the Mongoose at no expense, saving his Snake with Repulse. 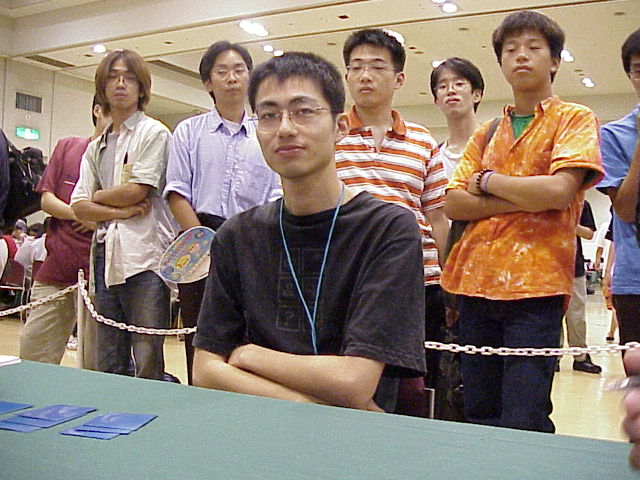 Shvartsman played Fire on one of the Snakes to save himself some pain, but the damage was done. His Flametongue Kavu was Excluded, and his kicked Kavu Titan watched Repulse replay a Mystic Snake. Even after all that, Harino still had Fact or Fiction in reserve. That was enough to convince Shvartsman to scoop.

Shvartsman chose to play first again in game two. His Mongoose ran into one playing for the other team, but his Skyfolk swung unimpeded. He had no counter for Harino's fourth-turn Fact or Fiction. Harino scored Blurred Mongoose and island over Prohibit and two land.

Harino played out his Mongoose, still under the gun. The two traded hits for three turns, and Harino discarded Questing Phelddagrif rather than make a move against Shvartsman. At the end of the American's next turn he played Fact or Fiction, muscling past Shvartsman's Gainsay with one of his own.

Harino took Blurred Mongoose and two land over Opt and Exclude, hoping to shift the race in his favor. He had seven cards in his hand. Shvartsman held his Skyfolk back, and tried to Repulse it after blocking and stacking damage. Harino let it happen. 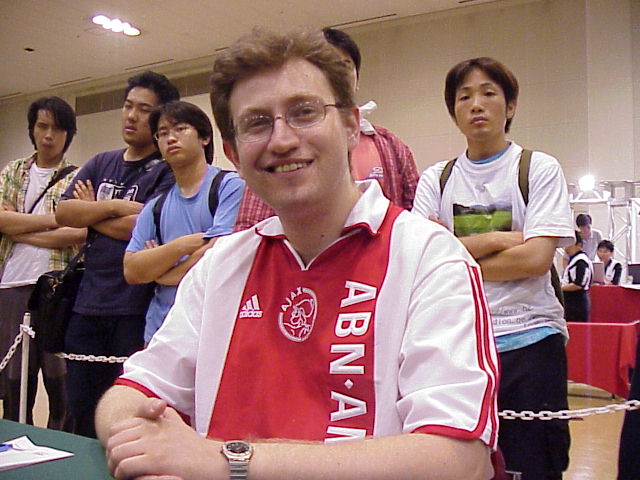 Shvartsman untapped. With just six mana at his disposal, he was constrained. He chose to go for the Skyfolk and let Harino Exclude. He played a second, and it met a similar fate. An unkicked Titan managed to enter play.

Harino swung again, and replaced the fallen Mongoose. When the two came in tandem Shvartsman tried to block and rescue his Titan with Repulse. Harino dropped Mystic Snake. Shvartsman went for the Exclude. Harino had Absorb. It made little difference that the same exchange happened over Harino's Questing Phelddagrif two turns later. He was way ahead on life and cards, a brutal combination. Shvartsman scooped.