These players were on 6-1 records going into this round. Amiel is playing a very interesting deck with Questing Phelddagrif as it's main kill mechanism, and featuring unusual cards such as Sunscape Familiar and Merfolk Looter. He crushed Gilles Blery's Blue Skies deck in the first round today, while Yann is playing an non-standard deck as well, Red-Black control. 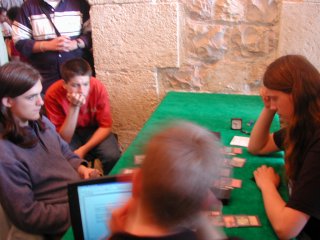 Aliel started off and played a first turn Bird of Paradise and a second turn Vine Trellis. His two Fact or Fictions in his hand were removed, first by a Duress, and then by an Addle, leaving him with just Counterspell in hand. Hamon played out a Fire Diamond then a Pyre Zombie, and then a second Zombie which Amiel decided to Counterspell.

Hamon quickly got up to six mana, allowing him to recurse and cast his Zombies every turn, while Amiel did nothing except play a pair of Sunscape Familiars and Opposition. Yann cast a second Duress which got rid of the last Counterspell from Amiel's hand, and then cast Ghitu Fire on him for seven, to put him on seven.

At the last possible turn, Amiel drew Worship, but he only had a Vine Trellis and a Sunscape Familiar in play. Yann killed the Trellis with both Zombies, and then brought them back to his hand. Amiel said "I need to draw a Phelddagrif now", and it was right there on top of his deck.

Yann played on anyway, as Amiel didn't have much white mana, and Amiel decided to cast Dismantling Blow on Hamon's Ensnaring Bridge, tap one Zombie with Opposition, and then attack. This was a horrible mistake as it left him with only one white mana open when he had no need to rush, and Yann took advantage by blocking the Phelddagrif with the Zombie, and then using it's ability. This forced Amiel to tap his last white mana source, and Yann had enough mana to bring back the Zombie and throw both Zombies at the Phelddagrif.

Yann continued to clear away irrelevant creatures such as Birds of Paradise, Merfolk Looters, and excess Sunscape Familiars out of the way with his Zombies. Soon Amiel had no creatures left in play and Yann could attack for the win.

Amiel's opening hand had no Islands so he chose to mulligan, and his six card hand was a little better. He played an Sunscape Familiar on his second turn, taking a point of damage from a City of Brass in the process, and then on his third turn a Meddling Mage and a Bird of Paradise.

The Mage prevented Yann from casting Pyre Zombie, but he used Persecute to strip the last spell - Fact or Fiction - from Amiel's hand, before using Ghitu Fire to kill the Meddling Mage. Both players did nothing but develop their mana bases for a while, but when Amiel top-decked Phelddagrif, Yann was ready with Tsabo's Decree.

Amiel continued to play Walls of various sorts, and Yann did nothing except draw Void and cast it for two, to clear Tenenbaum's side of the board save for a lone Bird of Paradise. Amiel immediately drew another Phelddagrif, but this one was killed by Void. Both players were top-decking well, and Amiel drew and cast an Eladamri's Call to fetch his third Phelddagrif of the game.

This time Yann didn't have an immediate answer, and the Phelddagrif started to hit. Three turns later the game belonged to Amiel.

Yann started off in this game by Duressing Amiel's Fact or Fiction. With ten minutes left in the round both players were playing rapidly to try and win the game. Amiel played a Meddling Mage but it was killed by Ghitu Fire, and Hamon Persecuted away a Phelddagrif.

Amiel made a mistake and didn't play Rising Waters as soon as he drew it, which went that Hamon was able to Addle it. Yann didn't find a Pyre Zombie until he had been reduced to four life by a combination of Meddling Mage, Llanowar Elves, and a Merfolk Looter.

Both players were playing very fast, but it was Yann who gained the advantage as he always had the removal spell for Amiel's threats - a Void for the Looter, Meddling Mage, and Sunscape Familiar, and then a top-decked Decree for Phelddagrif.

Amiel was not able to draw another Phelddagrif and couldn't do anything about the Pyre Zombie's remorseless attacks.